Boris Johnson Will Replace Theresa May as UK Prime Minister

Boris Johnson Will Replace Theresa May as UK Prime Minister

The UK faces an October 31 deadline for Brexit. 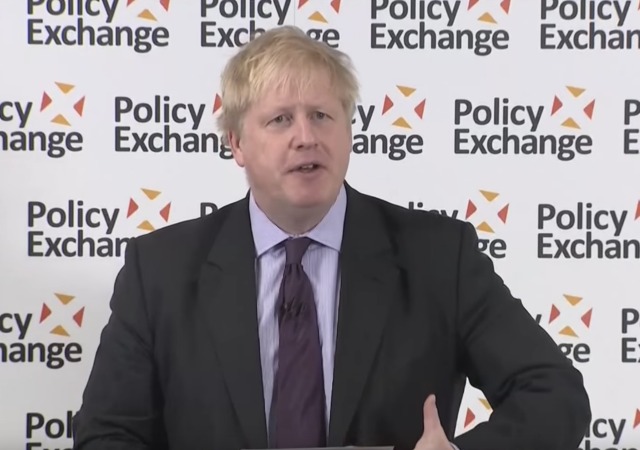 Boris Johnson beat Jeremy Hunt today to win the Tory leadership in the United Kingdom, which means he will replace outgoing British Prime Minister Theresa May.

From The London Times:

The Queen will ask Mr Johnson to take over at No 10 tomorrow after Mrs May takes part in her last prime minister’s questions. His first act will be to appoint a cabinet, starting with a new chancellor to replace Philip Hammond, who has already made clear that he will quit before he can be sacked.

Mr Johnson won 66 per cent of the vote. The margin ensures that he has sufficient authority to shape his government. Anything below 60 per cent would have caused him serious early issues.

However, even with the support of the DUP, the Tories’ parliamentary allies, Mr Johnson will have a majority of only two if, as expected, the party loses a by-election in Brecon and Radnorshire on Thursday.

Johnson needs to form his cabinet immediately so they can give him “approval for a new negotiating strategy” over Brexit. The UK faces an October 31 deadline for Brexit after three years of intense meetings with the European Union.

A job poorly done Ms. May.

I wonder if the United States Navy was told to stand down when two of Teresa May’s ships were being seized by the Iranians. I would think nothing flies in that area without the US Military knowing about it.

Ms May and British Amassador Sir Nigel Kim Darroch (who May has 100% confidence in) can protect their own ships according to the United States Secretary of State.

Apparently May had previously nixed an offer of protection from the US:
https://www.breitbart.com/europe/2019/07/22/may-turned-down-trump-offer-protect-uk-ships-please-eu/
Boy, has she made some horrid decisions!

So with May and Merkel working together and lying about confronting Iran and Russia, could it be May told the UK Navy to stand down on this? It seems like the EU is just Stalin finally getting his chance to sweep up all of Europe into the USSR. Merkel is particularly loathsome in her duplicity with the US.

That’s previously as in last week not before the UK-flagged tanker seizure by Iran. I don’t think the article (which I read an hour or so before seeing your comment) was particularly clear about this fact.

Indeed. Sadly, all May had to do was play hardball with the EU and force a no-deal Brexit and she couldn’t even do that right. At heart she was a Remainer and that internal conflict made her a poor choice to try to negotiate anything. Worse, the EU knew it, too.

notamemberofanyorganizedpolicital in reply to dystopia. | July 23, 2019 at 7:46 pm

But Kumquat May’s GLOBALIST HANDLERS though she was doing a fantastic job of delaying and preventing Brexit!

She really sucked, didn’t she? Still, she was the best the ‘conservatives’ had to offer in Britain.

May Boris do well.

Are you sure you want to view this community?
This community is quarantined
It is restricted due to significant issues with reporting and addressing violations of the Reddit Content Policy. Most recently the violations have included threats of violence against police and public officials. As a visitor or member, you can help moderators maintain the community by reporting and down voting rule-breaking content.Are you certain you want to continue?

This has been documented many places. Reddit is now trying to push all of it’s Trump supporters into a little restricted corner, a prelude to banning all open Trump supporters from Reddit completely.

They say they’re doing because they’re all racists. How does Reddit know they’re racists? Why because they support Trump, of course.

This is true; I’m a Reddit member, and the mods have been at war with the Trump-supporting community there for a long time now.

It’s a constant battle to post things & keep them posted, and truth has nothing to do with it, it’s what they think of the truth that matters. Mostly, they don’t like it at all!

notamemberofanyorganizedpolicital in reply to Valerie. | July 23, 2019 at 7:48 pm

Combs his hair with a balloon. Hope that’s the only similarity to Bernie.

At least he’s more qualified than just blowing balloons up: which is most politicans in Europe and America.

I do wish Boris would get some comb-over lessons from Trump, though.

I have serious doubts that Boris will work out. We’ll find out within days if he fails to clean house. If he can’t get rid of all of the Remainders surrounding him in his own house, what hope is their that he will muster up the courage and strength to deal with the world outside?

The UK faces an October 31 deadline for Brexit.

I prefer to think of it as the EU facing the deadline. It has benefited far more from British membership than Britain has.

notamemberofanyorganizedpolicital in reply to McGehee. | July 23, 2019 at 7:50 pm

UK has the 8th largest economy in the world I read last week.

Sure the individual PU members are small shrimp in comparison.

This is a great development.

After Shakey Merkel’s recent support of the Goon Squad, she showed herself to not be an ally of the US. DEFINITELY not.

Let Germany pay for us defending it – 100%, or give it to Russians already.

If we pulled our military out of Germany and went to a friendly country like Poland, and if the Brits bought fewer German cars, Germany’s economy would make Spain’s look good.

Germany is a goner. It will be ruled by lunatic woman and islamists, like Sweden.

Now Poland and Hungary have it right. THAT’s where our military ought to be.

Leave it to the UK to choose the wrong one twice.
Farage is who they need.

I think that he’ll end up prime minister if Boris fails.

Give Boris a chance.