The air is being let out of leftist antics diminishing the celebration of our nation and its military. 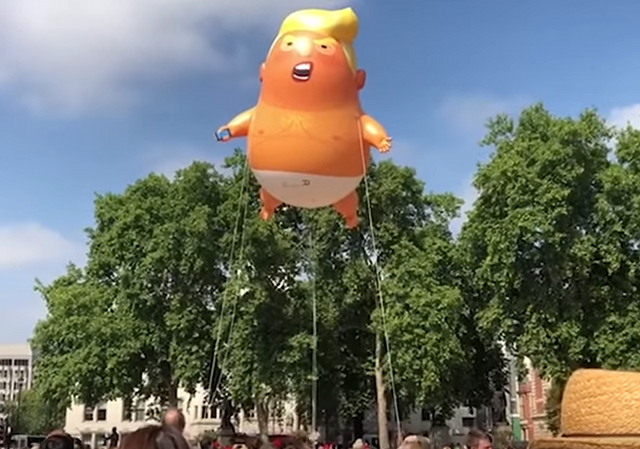 As my talented colleague Mike LaChance reported, the President Donald Trump as essentially launched the biggest set of political fireworks ever by enhancing the capital’s Independence Day celebration.

Meanwhile, the Trump supporters are proceeding with the arrangements to ensure a spectacular celebration of our nation and its military.

For example, the Baby Trump balloon that I mentioned has received a permit. Interestingly, it turns out there are certain restrictions that will prevent it from flying terribly high.

According to a Tuesday press release from Code Pink, the National Park Service has granted the left-wing gadflies a demonstration permit.

But it “does not allow the balloon to be filled with any helium, only air, and the permit is not in the location we requested — within line of sight of the Lincoln Memorial where President Trump will be speaking,” the group said.

Without helium, the small blimp of Mr. Trump’s head on a diapered baby’s body cannot rise off the ground.

In keeping that our independence was won from the British, the leftists activists are now importing a robotic Toilet Trump float to use during the “Salute to America“.

A giant robot designed to look like President Trump tweeting while sitting on the toilet, which made its debut in London during the president’s recent visit, will follow the president to D.C. on July 4 to protest his “Salute to America” celebration.

…“This 4th of July, CODEPINK will host a festival on the National Mall from 2-6 p.m. to protest the Trump administration’s politicization of our national holiday,” the group said in a release. “The anti-war organization will be featuring the Trump Baby Blimp, made famous in the UK, and a 16-foot Trump Robot sitting on a golden toilet, as well as lots of small Baby Trump balloons. The festival will also include stand-up comedy, a dance party, and an open mic for participants to bring attention to issues that are important to them.”

More than a dozen other groups and individuals have requested space on the National Mall for activities that include making cards for troops, leading group meditations, selling books of poetry and preaching.

There were also rumors that few military officials would be willing to participate in tomorrow’s events. However, and unsurprisingly, this is #FakeNews.

The department on Wednesday said that Acting Defense Secretary Mark Esper will participate in the event, called “Salute to America,” alongside Chairman of the Joint Chiefs of Staff Marine Corps General Joseph Dunford.

Other officials expected to participate:

I hope all our Legal Insurrection readers have a safe, happy and glorious Independence Day. I will be in front of TV from 6 pm to 8 pm EST tomorrow, savoring the celebration from the People’s Republic of California.

It’s amazing to me how these same losers would have you jailed during the regime for even taking exception the to overlords failed policies. Think that’s an overstatement ask the guy that made the video they blamed Benghazi on or Denesh DeSouza

Come on. Everyone knows Benghazi was a popular uprising because of a YouTube video nobody had ever seen. It has to be true, Hillary said so.

notamemberofanyorganizedpolicital in reply to 2smartforlibs. | July 5, 2019 at 9:56 am

“There were also rumors that few military officials would be willing to participate in tomorrow’s events. ”

This is an easy lie to perpetuate, because it is well known DC that most military people aren’t even allowed to wear their uniforms in DC. Without the uniform, there are no pictures of “military officers.” It doesn’t mean they aren’t there.

There’s a lot of sniping being carried in the local paper, including unsettling accusations about this administration not delivering tickets to high-ranking Democrats for the event. Curiously, there have been no stories about the boycott of the event by Democrats. So, the way they’ve placed it is that Orange Man Bad refused to give tickets to disappointed Democrats, without the context that Democrats have ostentatiously stated they don’t want the tickets.

I would think between AOC and many of the others there would be enough hot air to send it into the stratosphere.

They think it’s so biting and painful to Trump and his supporters….most of us think it’s funny because all it’s really a symbol of is what small, petty, vindictive losers they are who still can’t accept they list the election…..of course they are too stupid and lack the self awareness required to see it’s basically the same as them standing there holding a sign that says ….
We Are Idiots

So, fill it with hydrogen. /oh, the humanity!

That was my initial thought as well. Easy to produce.
Unless the Parks specified ” Only Air ”
And they lost their location anyway..

Certainly, they have enough hot air to float it. That and passing gas are their only attributes.

Hydrogen dangerous, explosion. Helium in short supply, should not be used in balloons.

As did I, cutting up my parents zinc canning jar lids and raiding battery acid,kit string fuses dipped in alcohol.

Why do I get the feeling that the National Park Service will cave and let Code Pink do what they want? Democrats are exempt from the laws the proles have to obey. #DemocratPrivilege

How much is this ridiculous stunt costing?
What’s the cost of bringing the balloon and the toilet robot to American soil, assembling the thing and making it work?
The left has their priorities twisted.

They don’t need helium. They have plenty of hot air.

Remember this is all about Teumps ego according to our not deranged left wing mineral Democrat elites hahahahahaa. Trunk us living tent free in their heads hahaha

I suspect they’ll thumb their noses at the Park Police and helium up that overinflated cheap chunk of plastic. Heck, they may even cut the ropes to let it float up where it can be seen, screw up the military fly over, and claim “Oops!” while throwing around all kinds of ridiculous charges about conspiracy and suing the Park Police for their loss.

An orange baby ready to be Planned by the cult of Diversity and Pro-Choice. Sound about right.

Anyone got running count of the number of liberal deaths caused by this parade?? Must be in the tens of thousands by now??

That helium thing is probably an FAA restriction. That’s all controlled airspace, any flying object (even tethered) is going to be controlled up the wazoo or forbidden outright.

So hydrogen and hot air are also Right Out.

So dems are politicizing a non political event. As always, they claim republicans are doing what they actually are

Can we trade 10 democrat politicians for every one illegal alien?

I actually like Baby Trump! He is adorable. The balloon reminds me of what I so love and enjoy about Trump’s presidency. He will tell me what he is thinking and feeling in a very genuine way. This reminds me of a young toddler who is so full of trust and has not yet learned to lie. A toddler like that shows a purity of humanity that I have learned to value. Also, Trump has preserved a sense of enjoyment and fearlessness in the face of danger that one often sees in little boy. It’s magical when an adult can preserve some of the best qualities of childhood and I think he has done very well.

Islam on the move in the Democratic Party. The ruination of American institutions ie holidays, etc. is a goal of Muslim Brotherhood. Ignore Islam’s influence on our country at your peril.

I have to say it’s so refreshing to have a president that can handle people not liking him. No rodeo clowns receiving lifetime bans- free speech is a thing again.

It’s equally refreshing to have a president, where if you disagree with him, you won’t have your car keyed or home vandalized, nor will you be doxed by his cult like devotees.

Sure we have leftists violently melting down at the color of your hat, but its much better than the 8 years prior.

Given the violent past of antiTrump protestors, allowing them to fill a ballon that size with hydrogen is like passing out complimentary explosive vests at an antiIsrael protest. Helium would be safe (if expensive) but DC is restricted air space so maybe there’s a worry about run-away balloons that size? Anyone know what they use for the balloon floats for the Macy’s Turkey Day parade?