Apocalypse Not: Cataclysmic Predictions Over Trump “Salute to America” Event

Apocalypse Not: Cataclysmic Predictions Over Trump “Salute to America” Event 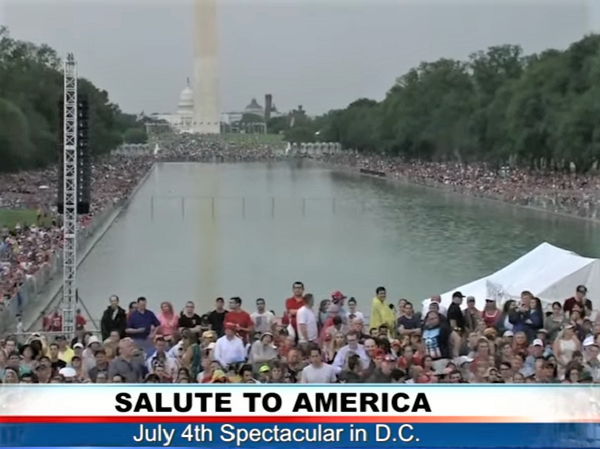 In the days leading up to President Trump’s Independence Day “Salute to America,” various anti-Trump pundits worked themselves into a ludicrous frenzy that tanks rolling in the streets of D.C. was a harbinger of doom.

People on Twitter are having a bit of fun revisiting the extreme predictions of the coming apocalypse from people like Harvard Law School Professor, and anti-Trump fanatic, Laurence Tribe:

I'd tweet agreement, but I can't get these handcuffs off. FASCISTS! And TANKS for NOTHING!

Let this sink in:

There are tanks in the nation’s capital and concentration camps at its border.

The drift to toward the unimaginable is unmistakable.

The doomsdaying was so bad that Newsbusters has provided another of their fabulous compilation videos.

The common line across broadcast and cable news alike was that President Trump would give something akin to a campaign rally speech. “You will hear criticism of his critics; you will hear a celebration of self in terms of how he sees his accomplishments,” declared New York Times White House correspondent and CNN analyst Maggie Haberman during July 3’s New Day.

Later that day on ABC’s World News Tonight, correspondent Stephanie Ramos touted the possibility that Trump was “turning a traditionally non-partisan event into a Trump-focused campaign-style rally.” Meanwhile, MSNBC host Lawrence O’Donnell referred to the event as “Donald Trump’s campaign rally in Washington, paid for by the American taxpayer.”

News personalities also worried that the military parade had totalitarian undertones, taking the opportunity to compare the President to various authoritarian dictators for the ten millionth time.

Needless to say the sky hasn’t fallen, we aren’t living under martial law, and the president is still “just” the president and not a totalitarian dictator for life.  Trump’s speech was not a “campaign rally” speech nor did he attack anyone of either party.

They all got it wrong.  Indeed, they got it so very, disastrously wrong that Marc Thiessen argues in the Washington Post that Trump made his critics look small.

Of all the stupid freak-outs we have experienced since Trump was elected, the hyperventilation over his Fourth of July address and celebration on the Mall may be the stupidest.

. . . . Millions of ordinary Americans who tuned in to watch must have been wondering what the fuss was all about. Democrats promised they would witness a partisan address. But instead, they saw the president deliver a deeply unifying speech that celebrated America’s accomplishments, and the courage of our men and women in uniform. With each passing minute, the president looked larger while his critics looked increasingly petty and small.

Trump critics who participated in the fear-mongering hype leading up to the “Salute to America” don’t really need his help looking small.  They manage that all on their own.

Does "got it wrong" go far enough?

It's not as if these people were doing any reporting and got bad information. They just made stuff up.

““The resemblance to days before Tiananmen Square is chilling.”

But then, it is consumed as fact by America’s useful idiots.

“the president looked larger while his critics looked increasingly petty and small.”

This has been true since he announced his run for office. How can a quarter to half the population regress to tween like behavior. I say tween because tweens have not started to reason. At least with teens there is a glimmer of hope.

It feels great to feel superior, without doing any work. That’s the corruption of America’s youth: their teachers let them skate if they take on their leftist political views.

And the little rats are corrupt.

You’re too generous.
They remind me of 6 & 7 year old children playing ‘make believe’ in the back yard after having a fantasy story read to them.

notamemberofanyorganizedpolicital in reply to Miles. | July 8, 2019 at 3:52 pm

Two and Three Years Olds is more like it…..

Tribe is clearly a delusional fool. Perfect for Harvard, a den of fools.

Two parked tanks and this is Tiananaman square?

I heard he was arresting democrats and sending them to a super double naught secret camp in the Dominican Republic. The reason this has gone unnoticed is that he is arresting the intelligent ones first. The ones in congress aren’t scheduled for arrest until the week before Thanksgiving which will insure a happy Thanksgiving for his base of deplorables.

July 5th NPR: one of the female anchors asked an expert how the 4th unfolded – her questions were of the “when did Trump not beat his wife” variety. Both the guest and host simply could not drop the “Tanks Rolling on DC” hyperbole despite the plain fact that nothing overly exciting happened before, during and after the event.

It’s as if the false story had actual physical mass and inertia behind it – as if they needed to aerobrake for fake news reentry.

Meanwhile we ignore the time that Hillary’s Husband deployed tanks and American Citizens were slaughtered.

You just know these people check under their beds every night to be sure DJT isn’t hiding there.

Yes, he writes, but cannot reason.

It’s too bad the internet crashed and burned when Net Neutrality was ended. Now we’ll never know about the dictatorship that’s taken over the land.

Tribe has gotten weirder and weirder.

Not only did they get it wrong, but they won’t ever admit it, or engage in the tiniest amount of introspection about their massive failure. There will be no improvement. The next time something happens, or doesn’t, they’ll keep shrieking the same idiotic stuff and complaining that people everyone else has their heads in the sand.

Just like the climate alarmists, with whom they march in lock-step.

Charles Blow is, and has been for decades, a token black for various Opinion sections of the nation’s newspapers and websites.

There’s at least a little bit of projection going on here as well. They would cheer and adulate someone of their political persuasion as Commander in Chief declaring martial law, and deploying the military to enforce it.

“Projection.” You beat me to it.
Yes, they’re imagining what they will do in a similar situation (say, when their girl, Kamala Harris, is elected), only at which time they will be singing praises for their savior and salvation.

Liberals are CCRRRAAAZZZYY people. Well, back through the looking glass.

I do remember thinking ‘man, they are pulling awfully hard at the other end of that rope in this tug of war. What happens if he just lets go?

Also … this is from people who get up and give campaign speeches at people’s FUNERALS. That takes some gall.

For those not familiar with Harvard Law School’s Laurance Tribe–he was the inventor of the Harvard Law School defense against plagiarism–when one of his publications was accused of plagarism, his defense was that he had not himself wrote the piece, it was done by his assistant.

I seem to have kicked a hornet’s nest.

Sorry, Harvard grads. I’m sure some of are fine human beings.