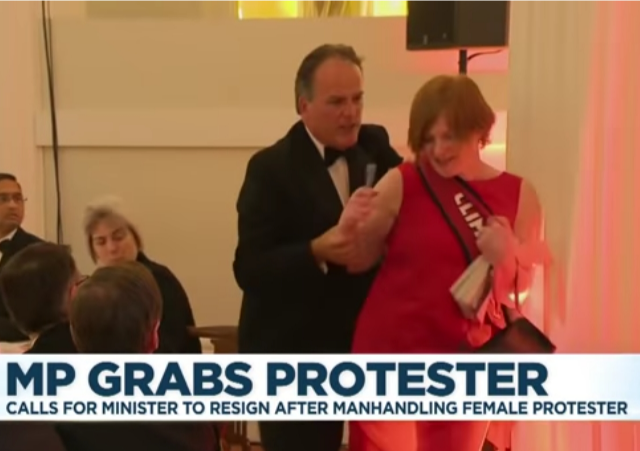 The UK junior Foreign Office Minister has been suspended after a scuffle with a ‘climate’ protester. The altercation took place when close to forty Greenpeace activists, most of them women, stormed a black-tie dinner in Central London.

Mark Field, UK Foreign Office Minister for Asia and the Pacific, was filmed escorting out a female protester by “holding her at the back of the neck” late Thursday, the Irish broadcaster RTÉ reported.

Field acknowledged acting in self-defense as the female activist approached him from behind at the dinner table, claiming to have “grasped the intruder firmly in order to remove her from the room as swiftly as possible.” He added that he felt he “needed to act decisively to close down the threat to the safety of those present.”

The Greenpeace activists tried to frame it as a gender issue. “There’s nothing like a female led peaceful protest to bring out the true character of an entitled man,” tweeted Hannah Martin, one of the activist involved in the incident. “We’re not going to let them crash the climate 10 years later,” she added.

The activists also complained “disproportionate reactions from different guests” against those crashing the private event. Prime Minister Theresa May promised a high-level government inquiry into the incident.

BBC reported the details of the altercation:

Climate change protesters – wearing suits, red dresses and sashes with “climate emergency” written on them – entered Mansion House on Thursday night, as Mr Hammond was beginning his speech on the state of the economy.

One of them began reading an alternative speech.

As Ms Barker walked past his table, Mr Field stood up, stopped her and pushed her against a column.

The Conservative MP for the Cities of London and Westminster then put a hand on the back of her neck and led her out of the room.

“It’s part of the messages women get all the time about our worth, who has power and who the state is protecting,” the spokeswomen for a leading UK women’s group said, adding that “male violence against women is endemic and too many women have experienced first-hand the indignant fury we all witnessed in Field’s behavior.”

The incident took place in the backdrop of a series of assaults on British right-wing politicians in recent weeks. The prominent Islam critic Tommy Robinson and Brexit campaigner Nigel Farage have been doused with milkshakes. Many liberals cheered this phenomena dubbed as ‘milkshaking,’ calling this a form of ‘resistance’ against public figures on the right.

That’s not violent, that’s forcible. Not the same thing at all.

No, forcible would have been kicking her (censored) out the front door into a mud puddle and shouting, “And stay out!”

Also, it would have been appropriate.

My favorite reaction to a protest happened, I believe, at the Australian Stock Exchange a couple of years ago. Multiple global warming protestors entered and started to chant slogans, etc. Within a few seconds, multiple stock market members grabbed all the protestors, literally pushed them out the door. As the last one got thrown out, one of the ASE members yelled to him, “Sod off, swampy”.

Not Australia. The International Petroleum Exchange in London. February 2005.

Need to send Jim Acosta over there to handle up on those crazy bitches.

Oh please. She should have tossed out on her butt in the street.

Threats of a high level inquiry means nothing to the Greenpeace bullies. Especially coming from an outgoing loser like May.

And then grabbing one of them by the scruff of the neck? Ugh.

When you have not 2A rights, you are only left to defend yourself with your hands. As we see, the fascists of Europe are even trying to criminalize that.

Hang on to your 2A rights like your life depends on it, because it does.

I agree with your conclusion but this isn’t the situation for it. There’s no reason for guns to be involved here. The guy did it exactly right, with his hands, no weapons.

Remember Feman, the extreme leftist feminists who like to protest topless (I know Vladimir Putin is an old KGB thug, but the smile on his face when they protested him was priceless).

They crashed a Muslim conference and got onstage. The speaker shoved her stage left and down on the concrete backstage. Then he and other attendees slapped the bejeesus out of her.

Not a peep from the woke intersectional PC crowd, feminists and all. There is literally nothing the “brown other” Muslims can do that they dare criticize. There are Muslim bakers, for instance, particularly in Muslim-heavy areas like Dearborn MI or Ilhan Omar’s Somali enclave in Minneapolis MN. Steven Crowder has a hilarious video of him pretending to be gay and going from bakery to bakery in Dearborn. First he asks if they make custom wedding cakes. If they do he asks them to bake a wedding cake congratulating him on his wedding to his fiancée, Bill.

Not one will bake a cake congratulating “Steve and Bill” on their wedding.

Of course no actual gay activists would dare try the same thing and bring a human rights complaint against a Muslim baker. That’s never been the point about persecuting Christian businesses.

“Never go full retard.” But that’s acceptable in the UK now. Leftists can crash a private event; hell, in Washington DC leftists tried to break down the front door at Tucker Carlson’s home. Which just shows that some leftist-run places in the US aren’t too far behind the UK. But Carlson’s wife, who was alone with the kids when the assault on their front door occurred had a firearm and call 911. I don’t recall if anyone was arrested.

Biden gives incredibly bad home/self-defense advice. But if someone is in the act of attempting to break in (the door was badly damaged) you’d be perfectly justified if you shot through the door. But then I live in Texas. The cops would probably shake my hand for taking care of a problem on my own that they’d otherwise have to deal with it. The local sheriff wouldn’t even ask, “Did he need killing?” because one look at the door would show the wannabe home invader already answered that question. Not all prosecutors are supporters of robust self-defense but even those who aren’t won’t bring such a hopeless case before a jury.

There definitely wouldn’t be a high-end government inquiry.

The minister did nothing more than what a female security guard (had there been any present) would have done. As for “violence against women,” where is this concern over the influx of foreigners whose native cultures normalize “violence against women”?
Speaking of security, how did these wankers get in the door at all?

The only thing they did wrong was what the speaker said right at the end: “committing to a zero-carbon world by 2050” stupid faux environmentalism.

The guy was definitely pushy with the woman and took advantage of superior strength to move her out of the way. But he didn’t cross the line.

I’m not seeing a problem on the video… other than it took too long and they were too deferential towards the protesters. The shrieking harpies can’t have it both ways… they can’t cry for equality and then whine when they’re treated the same way a male disruptor would be treated. When you’re confronted with protesters at a private event you block them from moving forward, tell them they must leave and if they resist, you lay hands on them and physically remove them. There is nothing illegal or immoral about it.

When thugs, however dressed, break into a place and try to physically prevent the gathering from exercising their natural rights of speech and assembly, physical force to defend those rights is justified. Fascist political intimidation must not be tolerated by citizens.