U.S. Calls For A ‘Global Coalition’ Against Iran

U.S. Calls For A ‘Global Coalition’ Against Iran

Secretary of State Pompeo: The U.S. wants a global coalition to “push back against the world’s largest state sponsor of terror.” 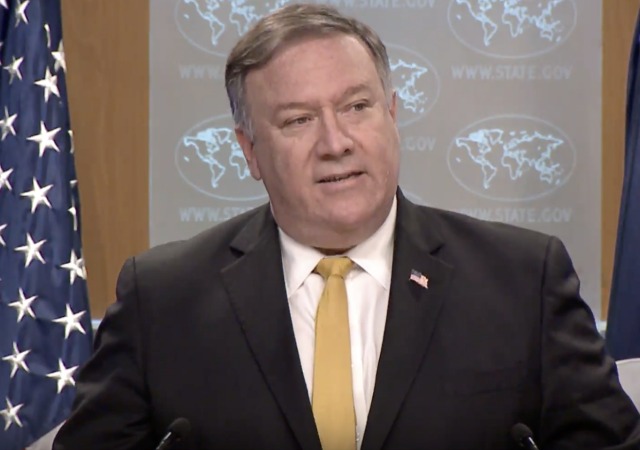 U.S. Secretary of State Mike Pompeo is visiting Saudi Arabia, the United Arab Emirates, India, Japan and South Korea in an effort to build a “global coalition” against Iran. The Secretary of State wants these five Asian powers to get behind the United States in its campaign of “maximum pressure” on Tehran, but he didn’t not rule out a U.S. military response if Tehran were to engage in further acts of aggression.

“The world understands who the aggressor is here,” he said. The Iranian regime “has taken them in a direction that their people surely do not want. So how we will respond to any particular act that the Islamic Republic of Iran takes, the President will decide when we get there,” he added.

The U.S. proposal for a ‘global coalition’ comes a day after President Trump vowed to put additional sanctions on the regime after Iran shot down a U.S. surveillance drone Thursday.

The Secretary of State proposed the idea for a global alliance in the following statement before embarking on the first round of his five nation tour on Sunday:

Our first stops will be in the Kingdom of Saudi Arabia and the United Arab Emirates, two great allies in the challenge that Iran presents, and we’ll be talking with them about how to make sure that we are all strategically aligned and how we can build out a global coalition, a coalition not only throughout the Gulf states but in Asia and in Europe that understands this challenge and that is prepared to push back against the world’s largest state sponsor of terror.

You’ll see too that our campaign that began when President Trump took office will continue. On Monday there’ll be a significant set of new sanctions, and the world should know that we will continue to make sure it’s understood that this effort that we’ve engaged in to deny Iran the resources to foment terror, to build out their nuclear weapons system, to build out their missile program, we are going to deny them the resources they need to do that thereby keeping American interests and American people safe all around the world.

I’m heading out today. Our first stops will be in the Kingdom of Saudi Arabia & the UAE, two great allies in the challenge that Iran presents, and we’ll be talking with them about how to make sure that we are all strategically aligned and how we can build out a global coalition. pic.twitter.com/txu0pA2xr4

The Treasury Department is also mulling the tightening of sanctions on Iranian banking system for regime’s involvement in money-laundering and terrorism financing. The Trump administration is pulling out all stops to isolate the regime which Secretary of State Pompeo identified as the “world’s largest state sponsor of terror.”

U.S. National Security Adviser John Bolton warned Tehran not to take President’s decisions to stand down on retaliatory strike for downing of the drone as a sign of military weakness. “Neither Iran nor any other hostile actor should mistake U.S. prudence and discretion for weakness. No one has granted them a hunting license in the Middle East,” Bolton said Sunday.

Following Iran’s recent aggression on the high seas, Washington has proposed an international force to protect the Strait of Hormuz, the world’s busiest oil shipping lane, news reports said. Last Thursday, two oil tankers were attacked in the international waters. The U.S. has released video footage and imagery showing Iranian involvement the attacks. “There have been too many attacks,” U.S. Special Representative to Iran, Brian Hook, said while calling for a multinational naval protection force in the Gulf. “We could have had an environmental disaster and extensive loss of life due to reckless Iranian provocations.”

While the U.S. Navy came to the rescue of the damaged Norwegian and Japanese tankers last week, President Trump wants Asian countries like China and Japan to take the lead. “All of these countries should be protecting their own ships on what has always been a dangerous journey,” the President tweeted on Monday.

That would be a very GOOD thing.

The Goober Farmer should have done it 40 years back.

Libya aborted their efforts to develop nuclear weapons and repented for past acts of international terrorism. Iran is not Libya. Gaddafy them with cause and move on, right? The Europeans should be on board.

If Wurope knows what’s good for it they will be in.

Thing is, does Europe know what’s good for it?

notamemberofanyorganizedpolicital in reply to mailman. | June 24, 2019 at 4:38 pm

Japan’s navy may be constrained by its post war constitution. I dunno.

Germany, France!and the UK are undermining our sanctions via the old “oil for food/meds” scam. The Krauts and France pulled that same grift not 20 years ago. An EU court found both had been illegally trading and breaking the embargo.

China help enforce the sanctions? Please. Iran is a burr under the American saddle – and China put it there.

Poland, Hungary, Lithuania and Ukraine have multilateral military pacts extant. Ukraine has frigates in the region.

The Dutch patrolled shipping lanes off Somalia back when piracy peaked 2011ish. They were aggressive and did good work.

Here is a link to data on oil shipped via the “straits” origins and destinations.

Latest numbers are from 2018 and at that time, 18% OF US imports traveled via that route and that represented about 8% of US total consumption. I suspect 2019 numbers will be less. (Asia is screwed if straits are blocked)

I think the Chinesecmay have something to say about that SHV.

After all, we don’t need that oil anymore. Let those who do fight and pay for it. We don’t have to incur all of the casualties and debt.

WTI is still at least $8 bbl cheaper than every other alternative. Companies are relocating to the US for cheaper, abundant and SAFE energy. Between being a net exporter and having foreign companies relocate, even to manufacture to export, we will reverse our trade deficit. This scares the hell out of the neocons and their permanent war strategy.

If the EU insists on surrendering their economy to Russia and continues to cheat on the Iran sanctions, it’s their problem. Let them pay the costs.