U.S. Believes Iran Behind Attack on Two Oil Tankers in Gulf of Oman

U.S. Believes Iran Behind Attack on Two Oil Tankers in Gulf of Oman

One investigator said that “damage appeared to be consistent with a hit by a torpedo or other projectile.” 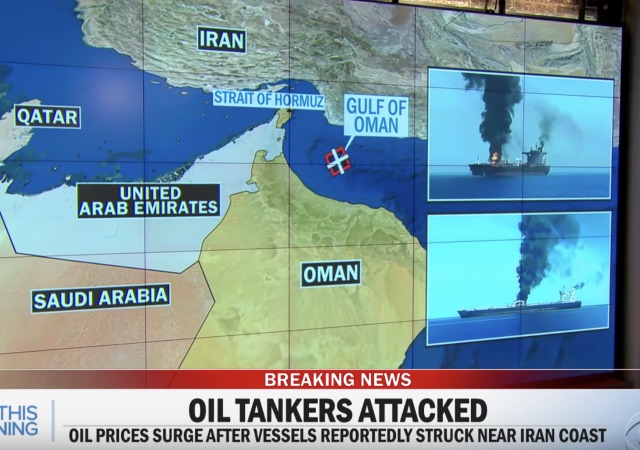 On Thursday morning, two oil tankers suffered from attacks in the Gulf of Oman. No one has confirmed what hit the tankers, but early assessments show that the  damage looks “consistent with a hit by a torpedo or other projectile.”

Officials identified one tanker “as the MT Front Altair, a Marshall Islands-flagged but Norwegian-owned crude oil tanker carrying naphtha, a petrochemical product, to Japan.” The other belonged to “Japanese-owned Kokuka Courageous” and carried methanol. 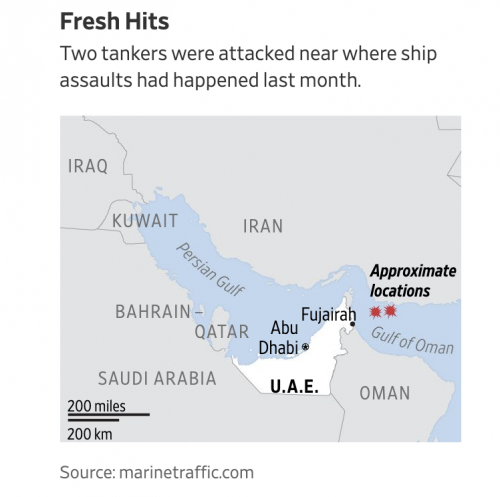 Iran claimed it helped rescue the sailors, but the U.S. pushed back:

The U.S. Navy’s Bahrain-based Fifth Fleet told Reuters it was assisting two tankers in the Gulf of Oman after receiving two distress calls. Details of the incident were unclear, but one of the operators made an unconfirmed report that a torpedo had hit its ship, Reuters reported.

“We are aware of the reported attack on tankers in the Gulf of Oman. U.S. Naval Forces in the region received two separate distress calls at 6:12 a.m. local time and a second one at 7:00 a.m.,” Joshua Frey of the Fifth Fleet said. The Fleet did not blame anyone for the attack.

Thankfully no one died. Only one person suffered from critical injuries.

One investigator explained that “damage appeared to be consistent with a hit by a torpedo or other projectile.” A captain nearby the attack “said he had seen a hole at the water line of the ship, and that it was consistent with a torpedo hit.” Other vessels heard the master of the first ship on a radio “saying that the ‘fire came from a surface attack.'”

Iran has already begun its innocence act by calling the attacks suspicious. Yes, suspicious especially since Japanese Shinzo Abe is in Iran to act “as an interlocutor for President Donald Trump to ease tensions between Washington and Tehran.”

Abe declared on Wednesday “that any ‘accidental conflict’ amid heightened tensions between Iran and the U.S. must be avoided at all costs.”

The tanker association INTERTANKO expressed concern over the attacks since 20% of the global oil passes through the Strait of Hormuz. INTERTANKO’s chairman Paolo d’Amico stated that if these “waters are becoming unsafe, the supply to the entire Western world could be at risk.”

In May, the U.S. blamed Iran for the attack on four oil tankers around the same area. Photos showed “large holes” caused by “limpet bombs,” which led investigators to conclude the “attacks were part of a sophisticated and coordinated operation carried out by an actor with significant operational capacity, most likely a state actor.”

time to covert the Iranian navy into fishing reefs.

and it’s a damn good thing we are a net oil exporter these days.

Where was the US Navy during this attack? What did the sonobouys tell them? We have to have that straight totally wired by now and must know exactly who, when and where they started the attack. I guess that’s secret and our people will act like obama and only know what they read in the paper!

You never want the other side to know what you actually know. It was said that in WWII that Churchill was reading messages sent to Hitler before Hitler had read them himself. Dito with the Japanese Naval Code. There used to be a rule that Enigma info could only be used if there was a separate independent verification, so if they knew that an attack was going to happen somewhere, they would manage to send a scout plane over that region first so that there was a different plausible explanation for secrecy being lost. Sure, that wave of P51’s that arrived three minutes after the scout plane was a bit suspicious, but still. 😉

I think the word “torpedo” references the classic definition of a mine as in “Damn the torpedos, full steam ahead”. Magnetic mines attached to the hull may be the cause.

As for “happening at the time Iran is hosting Japan”… so what?

Again, I’m all for blaming Iran, but there’s pretty much zilch for evidence here. “Consistent with a torpedo” is too weak to be evidence. I wonder who makes such anemic torpedoes nowadays? A proper military torpedo would break a ship like that in half.

The “limpet mine therefore state actor” equivalence is weak. Limpet mines were developed to be attached via magnetic clamps to the undersides of ships, where they’d be difficult to find (and, obviously, to photograph), and of course divers are needed to put them in place. Slapping something on the side sounds a bit less “state actor”-ish.

INTERTANKO’s chairman Paolo d’Amico stated that if these “waters are becoming unsafe, the supply to the entire Western world could be at risk.”

This is a roundabout way to say that it will make the oil more expensive to transport; it wouldn’t establish any sort of blockade.

personally, I don’t think we need any excuse to kick the crap out of Iran. I repeat the call for knocking out all of their reservoirs and hydroelectric dams.

Wouldn’t a torpedo hit leave tell-tale evidence? Like part of the torpedo itself?

And why attach a limpet at the water line? How hard is it to attach even 2-3 feet below the water line? And if that is the case, why 2-3 feet? Why not several feet where it won’t be detected and much more effective? If these reports are accurate, it doesn’t sound to me that it was either.

The Japanese captain reportedly claimed several volleys of “flying debris” in between explosions.

Looks like we need to wait. We may never know what actually happened.

A captain nearby the attack “said he had seen a hole at the water line of the ship, and that it was consistent with a torpedo hit.”

How many active commercial sea captains have actually ever seen a ship damaged by a torpedo?

Are these top of the line Iranian torpedoes or some kind of Islamist Terrorist Improvised Torpedo Device? Would that be an ITITD?

Wouldn’t a torpedo launched by a navy such as Iran do a lot more damage?

What did Obama know and when did he know it? Anyone seen John Kerry, recently?

These attacks only intend to damage, not sink. One purpose might be to raise the price of a barrel of oil for an Iran which needs cash. But the US Navy must know every propeller in that area on the surface or below. Enough of this crap already

My advice: Chill, and wait. No matter what the US knows or doesn’t know, it isn’t going to do anything until Abe is physically out of Iran, anyway.

Iran does have a submarine force. This does not have the earmarks of a surface ship attack or a missile attack.

I have no idea what the response of the United States will be. However, if I were going to hit them hard, I would be feigning complete ignorance.

Perhaps the B2’s that cause large explosions in Iran can be put off to spontaneous combustion?

Two big questions: What and How (because we’re pretty sure of Who)

What exactly was the attack, a mine or a torpedo? Smart people with calculators are measuring the holes and comparing them to known warhead damage now, along with getting chemical samples to figure out what kind of explosive was used, running simulations, tracking known locations of Iranian submarines, et al… A torpedo will leave a collection of parts on the bottom at the scene of the crime, which might just get an unmanned submersible poking around to see what is sitting on top of the mud.

How did it happen? Well, a torpedo requires a launch platform within range, and the area is a horrible mess for any sonar observations, so if Iran has a sub out wandering around, we may never be able to tie A to B with a great amount of certainty. Then again, an oil tanker has to remain stationary for an extended period while filling, and if Iran slipped a few divers into the water from a nearby ship to plant limpet mines, that’s going to be just as hard to track back. Those mines could have been attached for days to months.

Remember all that cash that was shipped to Iran by Obama… hum..Iran kinda spreading the wealth around you know.

I keep thinking of all suspicious predicates for war.

the Maine, Gulf of Tonkin, WMD, gas attacks by Syria.

All of these depend on the honest of our intelligence agencies, and I have a low opinion of them. They are motivated to goad Trump into some precipitous action.

We already have plenty of justification for attacking Iran. The have promised to destroy us and Israel over and over. It’s past time for us to take them at their word and strike first.

Saddam did have 2,500 WMDs. It was reported on the front page of the NYT.

Some are real and some convenient.

First of all, the standard disclosure: This is all speculation, and is subject to revision as more information becomes available. With that out of the way, here are a couple of points, not in any particular order:
1) It is unlikely that these tankers were attacked by torpedoes. Since WWII, torpedoes don’t actually impact a ship at the waterline, they detonate below the ship, so as to break its keel. Only if the torpedo was set to run at the surface with an impact fuze (both unlikely, and possibly requiring modification to the torpedo) would it leave a hole near the waterline. However, a explosive-laden drone, or a missile could leave such a hole (or a limpet mine attached while the vessel was in port, with a long time delayed fuze). The master of Hyundai Dubai reported the cause of the fire as a “surface attack”, which would be consistent with small missiles being fired by small attack craft. (See https://www.tradewindsnews.com/casualties/1806861/frontline-and-schulte-tankers-attacked-off-fujairah). This is also consistent with the desription in the article cited above as the hole being “The tanker has a large hole just above the waterline” Such tactics are practiced by the Iranian navy.
2) Recently, there have been a series of attacks on shipping in the region. On 7 June, 6 small sized vessels appear to have burned in the Iranian port of Shahid Rajaee
See http://www.eaglespeak.us/2019/06/tanker-attacks-off-iran-irans-response.html#comment-form This occurred after the May 13 possible limpet mine attack of 4 tankers in the UAE.

In short, it sounds like Iran and some of the Saudi-aligned nations may be in the early stages of a maritime skirmish.

Attacks in busy ports are difficult to observe. Attacks in open waters, such as the Gulf of Oman or the Persian Gulf, are not that hard to spot. The USA has the best surveillance capability in the entire world. It has the best anti-submarine force in the world. We have satellites, drones, manned surveillance aircraft and submarines. Any future action in this area should be well documented.

I’m surprised the left is not condemning Iran for burning all of those fossil fuels.