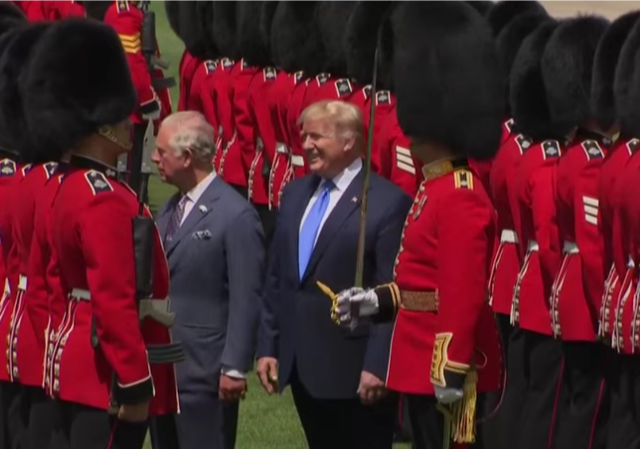 As U.S. President Donald Trump embarks on the second day of his state visit, the British mainstream media and Liberal establishment have reacted furiously. The President is on a three-day trip to the UK that marks the 75th anniversary of the D-Day landings.

“[H]is misogynistic outbursts and attacks on journalists, minorities and anyone else perceived as an enemy drive a good number of people to conclude that he is a dangerous man to hold so much power,” British newspaper The independent remarked.

“Trump is a one-man-round of Cards Against Humanity,” the left-wing newspaper The Guardian said. Another Guardian commentator compared President’s visit to “a brutal assault… on progressive values.”

The Guardian published a lead editorial titled the “view on Trump’s state visit: the president is not welcome”:

Mr Trump is only the third US president ever to be honoured with a state visit, the others being George W Bush and Barack Obama. Inviting him in the first place was a crass error. (…)

Mr Trump is a demagogue who represents a threat to peace, democracy and the climate of our planet. (…)

It is incumbent upon Mrs May and others to challenge him directly – or risk appearing to give the assault on women’s rights, and bullying of neighbouring states, a seal of approval. The climate emergency should be on every agenda – including Prince Charles’s. The protesters, whom police have wrongly barred from the entrance to Downing Street, are justifiably angry. So is London’s mayor, Sadiq Khan, whom Mr Trump has previously insulted, and who hit back on Saturday in the strongest terms.

The newspaper was referring to the war of words between President Trump and Mayor of London, Sadiq Khan. Ahead of Trump’s arrival, Khan wrote an op-ed likening him to ‘a 20th-century fascist.’ Trump responded on Twitter, calling him a “stone cold loser who should focus on crime in London.”

Khan, meanwhile, continued to insult the visiting U.S. President, calling him the “poster boy for the far-right,” with New York mayor Bill de Blasio coming to Khan’s defense. De Blasio demanded Trump apologize to Khan for his previous remarks. He described the Mayor of London as “an exemplary leader,” and disparaged the President as “part of this growing, intolerant, right-wing movement around the world that is harming democracy. It’s harming the realities of a tolerant society.”

The Independent supported Khan and anti-Trump protesters, claiming “history shows the dangers of not speaking out against authoritarians who would clamp down on hard-won freedoms.” The British newspaper echoed Khan’s remarks, calling Trump a “poster boy for this neo-authoritarianism, which has nationalism and conservatism at its heart.”

The mean-spirited attacks weren’t limited to the President alone. The Guardian likened the First Lady Melania Trump’s attire to that of a ‘flight attendant.’ “Melania arrived in the UK dressed as a flight attendant who tells you that there are no blankets available because they only stock them on night flights,” the newspaper commented. “No, but seriously; look at Melania’s scarf: ‘Hun, I’m afraid we’ve run out of the Pringles, but we’ve got Mini Cheddars?'”

Not just the mainstream media, the left-wing political establishment was equally furious at the visiting President. “Politicians unite to condemn Trump during visit,” the London-based Times noted.

“Trump is doing great damage to British interests and our traditional alliance with America,” deputy leader of the pro-EU Liberal Democrats, Sir Vince Cable, wrote on Twitter. A senior Labour party leader called U.S. president a ‘sexual predator’ and ‘racist.’ “The truth is he has tried to close borders with Muslim-majority countries,” the shadow foreign secretary, Emily Thornberry, told BBC Radio. “He is a sexual predator, he is a racist and it’s right to say that – we need to think about when is it our country got so scared?”

President Trump addresses the Queen at the State Banquet


The Labour party chief, Jeremy Corbyn, is spearheading anti-Trump protesters in London. “Corbyn asks the country to protest against the President,” The Telegraph reported. “Thousands of protesters are expected to descend on London’s Trafalgar Square where Mr Corbyn will whip up the crowd with a speech about Mr Trump’s “misogyny and climate change,” the newspaper added.

Anti-Trump activists held a “Together Against Trump” protest in Central London and calling the event a “carnival of resistance.” Triggered by the presence of the U.S. President, protesters gathered at Trafalgar Square calling for a “Trump-free zone.”

While the mainstream media rooted for anti-Trump protesters, with MSNBC declaring that “[t]ens of thousands of protesters are expected to flood the streets of London in protest at President Trump’s state visit to the UK,” the actual turn out was much lower.

Trump dismissed the media frenzy as ‘fake news.’ “There were thousands of people cheering,” he said. “I don’t see any protests. I did see a small protest today, very small. So, a lot of it is fake news, I hate to say.”

The media is following orders to appear to be upset. They may not be very bright but they are not as stupid as they appear to be. They are a communications channel of the deep state. They tell us what and who the deep state fears.

notamemberofanyorganizedpolicital in reply to TX-rifraph. | June 4, 2019 at 3:58 pm

If they were really upset and not just play acting they’d have “Jones Town” Kool-Aided themselves already!

There was a yuge pro-Trump rally in London during his visit. Likely there are others.

Take a look at the 2d video; really impressive,

notamemberofanyorganizedpolicital in reply to fscarn. | June 4, 2019 at 4:55 pm

Did you see the post (downstream here I think) about how those “huge” rallies are totally FAKED!

notamemberofanyorganizedpolicital in reply to fscarn. | June 4, 2019 at 4:56 pm

Yes, see Squires discovery of this Fake down below my post here.

I’m reminded of a pair of photographs that were making the rounds not too long ago.

In the first: a solid rank of leftist pols and their vassals, arms interlocked, shoulder to shoulder, proud and imposing as they stood spanning a city street.

And in the second: the same group, but from a higher angle and in a looser frame, showing they couldn’t quite actually span the street, and that they were in reality barely two ranks deep.

“The narcissist is a puddle pretending to be an ocean.”

I’ll admit, Trump irks me, but he irks the people who I think need irked far more, and for that, I’m perfectly willing to tolerate him for another six years or so.

Good! As long as Trump is irritating Libs, he’s got my vote!

I always see these accusations of “Trump is a threat to” thing and is “damaging” that. What I never see them articulate or explain is “How?”, and when I ask I mostly just get yelled at and called names.

Well, they can’t have DJT, at least not yet; we’re going to need him for a few more years.

If the socialists are not upset, Trump would not be doing his job.

1. Told ME I had to put up with Terrorism as it was “part & parcel of living in a big city”. A young soldier & an old lady have been (completely) beheaded within a few miles of where I live within the last 5-6 years or so.
2. Has presided over a wave of street knifings since he came to power & blames everyone but himself. My borough is ranked third in the murder league table in London.
3. Banned the advertising of bacon (along with butter & some other food that I forget) on London Transport to “fight obesity”. I like a bacon sandwich now & then & at 190lb & 6’ in height I’m of average obesity. Surely that’s my choice?

As far as I’m concerned President Trump can be a rude as he likes about Mayor Khan & I will applaud every single word.

Khan will be re-elected.

notamemberofanyorganizedpolicital in reply to JohnOfEnfield. | June 4, 2019 at 4:05 pm

A brave British woman just popped the Baby Trump balloon. Millions of Brits are pissed at the treatment of our President.

notamemberofanyorganizedpolicital in reply to Leslie Eastman. | June 4, 2019 at 4:10 pm

notamemberofanyorganizedpolicital in reply to Leslie Eastman. | June 4, 2019 at 4:15 pm

Always thought it so ironic that the Brit Communist’s protest balloon was so shrimp size tiny! LOL

Someone in the Trump entourage ought to get a note of thanks and some sort of Trump memorabilia, signed by the President himself, to her.

Just at a guess, I’d imagine that big balloons don’t annoy DJT. He probably rather likes them, and the bigger, the better.

I wonder if he’s offered to finance a bigger and better one.

I love it, she was hilarious

Popped that piece of s-t!

Trump is the guest of “the sovereign”, the Queen of England. He represents their best hope for preserving England’s national sovereignty. That is very likely why the Queen is smiling so broadly in virtually every picture. I am sure the Queen has no warm feelings about Mayor Kahn nor for the rest of the “remainers” who want to abolish national sovereignty.

The British media has gotten on his outrage horse over the visit. The BBC, supposedly an unbiased media outlet framed the upcoming visit by having a trump bany balloon on it’s set!

Ignore the British media as they are all the same, especially the BBC and the guardian since the guardian is nothing more than the print version of the BBC.

On the other hand I’m in NZ at the moment and it was refreshing yesterday when one of the news shows took the piss out of little Khan for poking the beer and getting the piss kicked out of him by Trump!! 🙂

The things the Brits fought for: “ freedom, sovereignty, self determination.” Sounds like Brexiit!

You are right finereport, but you must keep in mind the context of the British derangement.

It’s all related to Brexit. The left knows that Trump is a threat to their desires to remain subservient to the EU. The last thing the left wants is a really great and yuge trade deal between America and the UK because that then reduces the UK’s reliance on trading with the EU.

Hence all the self induced hyperventilation about America buying the NHS even though there is no actual trade deal on the table. So the left has to manufacture the outrage to get ahead of the game to derail any trade agreement with America. Of course the left never really asks just why the fuck would Anerica want to own the NHS but that’s besides the point!

Do those who call the likes of Trump and Churchill fascists and the enemies of the people ever think to look in a mirror?

I listened to the BBC’s newscast last night and had to laugh. They interviewed some British citizens just north of London–the people they interviewed loved Trump. No matter how many times they asked what the people thought of him as a man, these people kept saying that he tried to do what he promised to do, and that they would welcome US involvement in the NHS.

Once you get outside London, I think Trump support is different from what you see on the major news networks.

Did anyone see the USA Today headline, “European allies made the D-Day landing at Normandy possible. 75 years later, Trump questions those bonds” . . . um….. the Europeans made the D-Day invasion necessary. If Germans hadn’t invaded and French hadn’t surrendered, tens of thousands of American GIs wouldn’t have died. I guess USA Today editors forgot to go to high school.
https://www.usatoday.com/story/news/politics/2019/06/05/d-day-75th-anniversary-donald-trump-normandy-speech/1301411001/