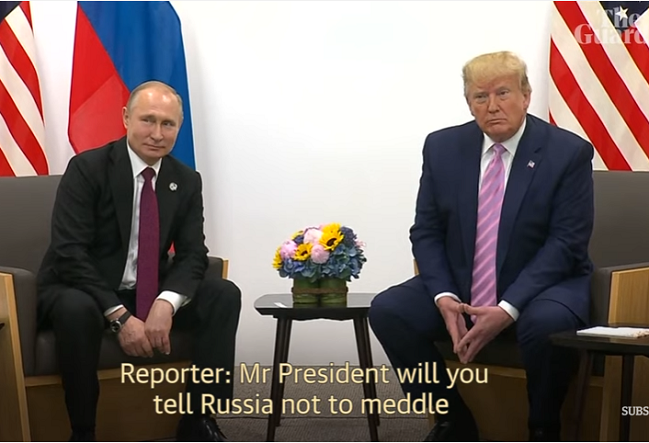 For the past few days, we’ve been treated to the left’s faux outrage over President Trump “joking” with Putin about not meddling in the 2020 presidential election.

The headlines are typical of the perpetually outraged left and its media:

As is often the case, I saw the headlines before I saw the video, and the first thing that I thought of was Obama telling Putin “to cut it out” back in December 2016.  How was that different than this?, I wondered as I scrolled through the articles. Where was the mention of an equally dismissive Obama?

My next thought was of the infamous Obama “flexibility” open mic moment prior to the 2012 presidential election.  Remember that one?

Reuters reported at the time:

As he was leaning toward Medvedev in Seoul, Obama was overheard asking for time – “particularly with missile defense” – until he is in a better position politically to resolve such issues.

“I understand your message about space,” replied Medvedev, who will hand over the presidency to Putin in May.

“This is my last election … After my election I have more flexibility,” Obama said, expressing confidence that he would win a second term.

“I will transmit this information to Vladimir,” said Medvedev, Putin’s protégé and long considered number two in Moscow’s power structure.

Can you even begin to imagine the leftist outrage if Trump said something like this?  Remember the memory hole it was quickly punted down when it was Obama cozying up to the Russians?

Obviously, I had to see the video.  After watching numerous clips, I finally found one with some context, and it turns out that Trump’s amusement was likely directed at the naive reporter who shouted out the question: “Mr. President, will you tell Russia not to meddle in the 2020 election?”

The president, bemused, agreed and asked Putin not to meddle.  The incident was comical not because Trump was downplaying election interference but because the butt of the joke was the media—in this case, in the person of a silly reporter asking a truly inane question.

Trump is not an idiot; he knows he can’t just tell former KGB officer and devout communist Putin to “cut it out” and Putin will obey like a puppy. Putin, for his part, is happy to do anything he can to cause division in the U.S. and went along gamely.

Ultimately, though, this was a nothingburger blown out of all proportion by a seriously TDS-addled media that prefers to forget the many passes on Russia they gave to the Obama administration.

No one listens anymore.

We all know that the left has no sense of humor and this just makes the case. Lieawatha funny? Bernie funny? Any of them funny? Only Biden is funny but he never means to be as in “Stand up Chuck”.

The incident was comical not because Trump was downplaying election interference but because the butt of the joke was the media—in this case, in the person of a silly reporter asking a truly inane question.

If Russia had really interfered by any significant amount then Trump would have received the majority vote.

I’m working on another post now and can’t look it up, but I seem to remember a line in the Mueller report about Russia really wanting Bernie, not Trump. If I’m remembering correctly, the Russians really had no say at all in our elections.

Bingo. The Russian false flag social media campaign included both anti Trump AND anti Hillary messaging – which fact the witch hunters conveniently ignore. The social media vs Hillary was arguably more effective – but only because Hillary and the DNC were too busy trying to (illegally) shield their communications from any future FOI requests to bother following common sense or legally required data security measures AND those communications revealed sleazy doings to sabotage Bernie’s campaign.

Also should be considered that the original sourcing for all the anti-trump defamatory info in the doc Hillary paid her lawyers to pay a foreign intel agent who paid Russian intel agents to supply could easily be considered the other wing of the Russian campaign to damage confidence in the election.

The most amusing thing to result from this whole mess is that a sizable number of registered Democrats appear not to understand the difference between running a media campaign vs a candidate and actually hacking the voting results.

If Russia had really interfered by any significant amount then Trump would have received the majority vote.

No, margo. Had Russia actually interfered by whatever amount, and had their latent Red dreams come true, Hillary Rodham Clinton would now be #45, instead of President Donald Trump.

The candidate they didn’t want would have been jabbed with a polonium-laced umbrella tip.

Obama meddled in Israel’s election and the media ignored it.

They cheered him on.

Russia gave the Clinton foundation 145 million. Was it because Russia cares about climate change or was it to make sure something they wanted got approved?

Are you implying that the Clintons might be less than honest? I’m shocked! LOL!

The US in the 50’s really understood the communist threat.

Take a look back at this ‘red scare’ movie, with Dana Andrews:

I recall reading during the 0bama years, the State Dept ran ads against Netanyahu in Israel – or contributed to others who ran anti-Netanyahu ads. I wish I saved what I read. I was incredulous that the State Dept would get involved in running ads for any candidate [regardless of party].

If true, and I suspect it is, who the hell is the US to lecture anybody? It’s another “do as I say, not as I do” mega hypocrite display of hubris.

thanks! that’s what I recall. the ultimate hypocrisy.

President Trump,in the eyes of the Dems/Progs, can do nothing correct. He could cure all illness and they would bitch about unemployed nurses.

Outrage is an etymological mistake. It comes from French outre, beyond what is proper. Wrong salad fork or something.

Made into a French noun with -age, English sees “rage.” What is beyond what is proper deserves rage, the word itself says so.

Not a person in a hundred realizes that outrage is two different things – what is beyond what is proper and the reaction to it. That makes it very handy politically.

So useful that that word was reimported back into French.

Hmmm. This might even be a case where English-speakers scrupulously pronouncing it as a French word (oot-RAHZH) would help.

Except around French waiters, of course. They would be out-RAGED.

Fake News morons probably didn’t even notice that there was zero joking in Trump’s manner when he said “no meddling,” and he said it more firmly a second time directly to Putin, who certainly did not miss it–you can see it in his face–but he accepted it as one of Trump’s conditions, which Trump is always clear about.

Our press is too busy lying to witness any of what is actually happening with our 72 year old prodigy of a president. Stupidest people on the planet, and the very stupidest thing about them is their belief that anyone would be better off with the press’ blind prejudices in control of the nation.