Tens of People Show Up at Impeach Trump Rallies

Tens of People Show Up at Impeach Trump Rallies 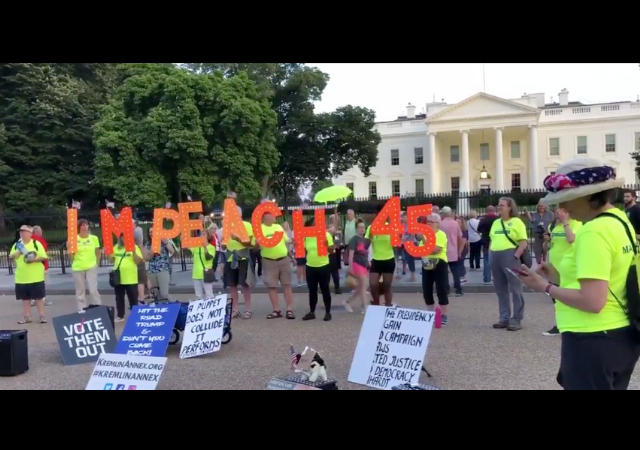 The protest effort to support impeachment of Trump is going swimmingly. A whole 15ish people showed up outside of the White House this past weekend to encourage impeachment of the president.

Been protesting w @KremlinAnnex & @hr_indivisible in front of White House since July 16 (Helsinki). 256th time last nite. Get tons of encouragement online + a few locals, quite a few tourists that happen by, & a few heroes flying in to join. There should be THOUSANDS joining us! pic.twitter.com/eHG2fD4som

The protest was organized by local group, Herndon Reston Indivisible, who describe themselves thusly:

The mission of Herndon-Reston Indivisible (HRI) is to mobilize a progressive network for resisting the Trump agenda while electing Democrats who support our values of transparency, inclusion, tolerance & fairness. We are inspired by the Indivisible Guide, and participate in the deluge of grassroots organizations, across the Nation that arose following the November 8th 2016 election.

This is the #ImpeachTrump rally. Guys, this is the beginning of the end for Drumpf pic.twitter.com/MeSZ1rLE8q

And this one. Can we even call it a rally?

From our #ImpeachTrump rally in Lewisburg, PA, Yesterday. pic.twitter.com/4gEeaOvvvN

If you need me, I’ll be over here: 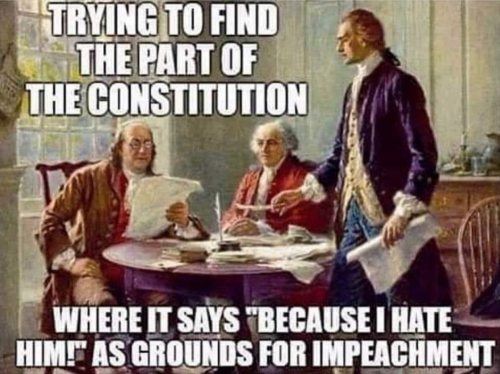 That said, peaches are out of season. Oranges are still a viable choice.

TOM FITTON: OBAMA STATE DEPT. (with John Kerry) WAS ‘AT THE CENTER OF THE STORM’ OVER ANTI-TRUMP DOSSIERS

At least they kept their clothes on. Getting tired of having to look at pictures of naked fat ugly woman with breasts down to their knees.

Those are the ones on sexual strikes. My question is: from whom?

A ten foot pole is understating the yuck.

It would seem more accurate.

To be fair, they don’t really know what indivisible means either.

And yet every day, the media continue to screech that “momentum for impeachment is building! No, honest!”

In the same vein as Hillary is going to win. It seems that rather large numbers of people could not stomach Hillary, and that was before we all found out that that she was a whining sore head loser.

Far from a ‘YUGE’ turnout.

That’s not even enough to get a bulk discount on their t-shirts.

Yellow Jackets! Should be interesting to see if this catches on. Rather a reverse use as in France it’s about lowering taxes. The Left is now multi-colored….b!ue, yellow, black (antifa). Anything but true Red,White and Blue.

so, so close! Had they got to 17 protesters that would have guaranteed impeachment!!!

notamemberofanyorganizedpolicital in reply to mailman. | June 19, 2019 at 1:57 pm

Does it count if they had to pay them to be there?

Firewatch in reply to notamemberofanyorganizedpolicital. | June 19, 2019 at 2:43 pm

Ha! And they had to prop the signs up with sticks, because there weren’t enough humans to hold them. And, for some reason, they took photos documenting for all time the pitiful turnout.

Impeach Trump Rally/ The Losers and Completely Delusional Convention…. Nice to kill 2 birds with one stone

How can they protest during the day? What about their jobs? (Sarc).

To be fair, it was a weekend.

notamemberofanyorganizedpolicital in reply to MAJack. | June 19, 2019 at 1:58 pm

Jobs? They can’t kept a job.

I count one baker’s dozen.

Almost didn’t have enough people for their big letters

By impeach do they mean disassemble and clean? What about all those 9mm’s and 40’s are they to be ignored? Is it just the black ones to be cleaned or the stainless ones to be discriminated against?

Same group that shows up to a Biden/Warren/Sanders rally apparently, just judging from the size.

Fundraising must be down, they could only afford a handful.

Getting the dead (the PC term is “corporeally-challenged”) to vote is pretty easy. Cook County and other deep blue hellholes have it down to a science.

But getting the corporeally-challenged to march in political rallies is a bit harder than stuffing ballot boxes. Paid demonstrators want, er, pay. So leftists fall back on fake crowd counts and a supine media to carry the day.

Looks as if only the most rabid of the Marxist left.

Saw a post earlier (and of course, now I can’t find it again…) that said there were more people waiting in line to use the porta-potties at the Trump rally than were at ALL 120 of the “impeach 45” rallies.

There were more people lined up at one of the sinks inside one of the bathrooms at the Trump Rally this week than showed up for this level 6 TDS TardFest.

There were more people lined up at one of the sinks inside one of the bathrooms at the Trump Rally this week than showed up for this level 6 TDS TardFest.