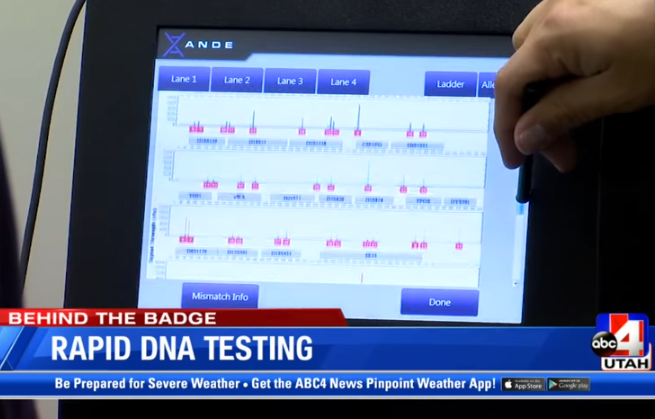 The patrol officers were highly skeptical of many of these familial claims, so in late April, the Department of Homeland Security started a pilot program to implement rapid DNA testing to check on the legitimacy of family claims.

The program is meant to cut down on migrant groups posing as family units, CNN noted.

ICE posted a synopsis of the project on Tuesday that said it will “aid in the identification of fraudulent familial relationship claims made by individuals entering or attempting to enter the United States.”

“The utilization of a Rapid DNA testing program will assist [Homeland Security Investigations] HSI Special Agents with identifying and investigating those who continue to commit these types of criminal acts in direct violation of U.S. law,” the synopsis said.

Rapid DNA testing can be accomplished in under two hours and is now being implemented to solve criminal cases. For example, it was recently used in the case of missing 5-year-old Lizzy Shelley to force a confession from the uncle who had murdered the child.

Where traditional DNA testing can take days or even months, Rapid DNA takes about 90 minutes. Because prosecutors had strong evidence, police were able to charge Alex Whipple even before finding Lizzy’s body, then trade a life-sentence for Whipple’s confession and her location.

Mutter said, “If they didn’t receive the answers as quick as they did, I believe Lizzy would not be recovered yet.”

The implementation at the border is already achieving results.

Acting Homeland Security Secretary Kevin McAleenan said in an interview with Hill.TV that 24 cases of false parental claims had been found at the U.S.-Mexico border in the first few days of DNA testing.

. . . . “One of the things we’re most concerned about is the increasing incidence of adults bringing across children that are not their own. I had a gentlemen in Guatemala last week tell me that everybody knows that bringing a child is a passport for migration right now,” McAleenan said.

McAleenan said that in the first few days of a program to conduct DNA tests the department identified “24 people that were fraudulently claiming to be parents of a child they were crossing with.”

“How many more cases are out there,” the DHS chief added.

McAleenan also noted that in the first 4 weeks his team has also identified 180 cases of false paternal claims under different identification methods, 360 fraudulent documents, and over 300 prosecutions of people purporting to be parents.

The results may be even more impressive if the real numbers are revealed.

In a pilot program, approximately 30% of rapid DNA tests of immigrant adults who were suspected of arriving at the southern border with children who weren’t theirs revealed the adults were not related to the children, an official involved in the system’s temporary rollout who asked to be anonymous in order to speak freely told the Washington Examiner Friday.

. . . . In some incidents where Immigration and Customs Enforcement told the adults they would have to take a cheek swab to verify a relationship with a minor, several admitted the child was not related and did not take the DNA test, which was designed by a U.S. company.

By now, it should be clear that the objections to testing purported family units were utterly disingenuous. Our system affords special treatment to family units, and open-borders advocates have applauded the exploitation of those loopholes as a way of circumventing legal restrictions on immigration.

. . . . Family units, as coyotes and their liberal enablers in the U.S. have learned, are much more difficult for our law enforcement professionals to handle than the single adults who used to make up the vast majority of illegal immigrants. The unprecedented explosion in apprehensions of “family units” – many of them now clearly exposed as fake – has stretched our border security resources to the breaking point.

DNA testing is a simple, unobtrusive, and inexpensive tool that makes it more difficult for criminals to exploit vulnerable children, removing a major incentive for human traffickers. We ought to implement it across the entire border, and do so as quickly as possible. In an area of public policy fraught with controversy and polarization, this should be a rare no-brainer.

It sounds like a good and practical idea, but ideally nobody should be crossing the border illegally. That is, without first obtaining permission.

“This is not screenings…”

I suspect that is because the Dems have worked language into the Border Patrol’s rules that strictly prohibit any ‘screening’ much like they’re forbidden from taking fingerprints from this ‘amnesty’ collection.

It is my opinion that every illegal alien/amnesty applicant coming across the border should be immediately fingerprinted regardless of the legal restrictions, and that this DNA test should be a requirement for any minors crossing with an adult, anywhere along the border.

There needs to be severe penalties for those making false claims.

Yah! kick them out immediately. Please don’t spend my tax money putting them in jail.

“In some incidents where Immigration and Customs Enforcement told the adults they would have to take a cheek swab to verify a relationship with a minor, several admitted the child was not related and did not take the DNA test”

Swab them anyway… never know, you might get a cold case hit or two.

Every single fucking illigal immigrant should be finger printed, DNA tested, photographed and what ever other process is required to fully document who the fuck they are when they are picked up.

Once done they are shipped back to what ever shit hole they came from and most definitely NOT dumped somewhere in America.

And the second time they cross, they are shot.

Maybe a more humane way – work it out with the Brits to drop them in the Falkland Islands. Cheap labor for them…

Drop them halfway between the US and their original point of origin. If that happens to be the middle of the Gulf of Mexico, well, that’s their own problem. As for the kids, we need to treat them as victims of international abduction – maybe turn them over to their country’s ambassadors and let them get the kids home?

Even aside from detecting fraudulent “families”, screenings like this inevitably turn up a surprisingly high number of husbands who *thought* they were the father of their wife’s kid, but… (Typically 5% of such tests are “paternity surprises”.)