Polish official: “Poland will be the regional hub of security.” 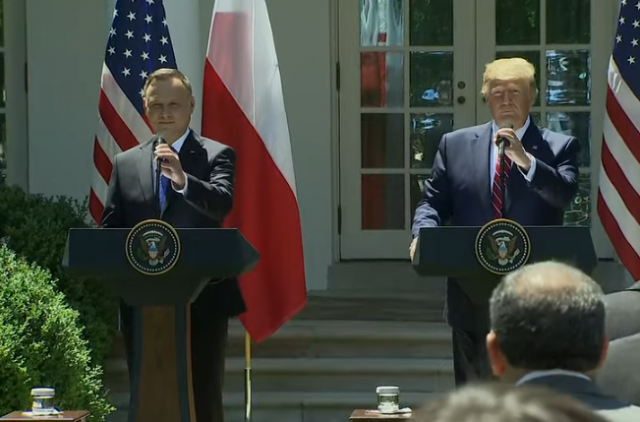 President Trump said Wednesday he is sending 1,000 additional troops to Poland in an effort to strengthen the U.S.’s alliance with the Eastern European country.

Trump made the announcement during a joint press conference with Polish President Andrzej Duda, saying Warsaw will pay for additional infrastructure “to support [the] military presence of about 1,000 American troops.”

“The Polish government will build these projects at no cost to the United States,” Trump said. “We thank President Duda and the people of Poland for their partnership in advancing our common security.”

The troops would come from the 52,000 already based in Germany. There have been discussions of establishing a permanent American base in Poland, perhaps with the name of “Fort Trump.”

President Trump said America was “very interested” in the idea, but was reluctant to commit to a permanent facility – something that would likely prompt a response by Russia.

“I don’t talk about permanence or not permanence,” he told reporters, adding that the base “would certainly be a statement”.

Poland has expressed continued concern over Russian interference, which is reasonable given its proximity and its history. Discussions between the two countries also included military equipment purchases.

“We are looking for a quantity and quality increase in military presence, an enduring presence of American troops in Poland,” Maciej Golubiewski, the consul general of the Republic of Poland in New York, told Fox News on Tuesday.

…Beyond the buildup of ground troops, officials are endeavoring to shore up their defense relationship through equipment purchases. Golubiewski noted that the “groundbreaking” trip will also entail further talks with Acting Defense Secretary Patrick Shanahan and National Security Adviser John Bolton concerning Poland’s desire to purchase 32 F-35A fighter jets and additional U.S.-made defense equipment — $48 billion worth over the next seven years.

“Poland will be the regional hub of security, the Eastern flank needs strengthening and Poland is a crucial part of that,” he said. “Poland needs to have proper military deterrence and posture.”

The administration is also looking at sanctions against Germany related to a controversial pipeline that would increase natural gas flows from Russia to that nation.

“Well, we’re looking at it. People have a right to do what they want to do. I think it’s something that I’ve been looking at and I’ve been thinking about and I’m the one that brought up the pipeline problem,” Trump told reporters during an appearance with Polish President Andrzej Duda.

…The Trump administration is seeking to displace Russian pipeline supplies to Europe with U.S. exports of liquefied natural gas, a form of the fuel chilled to liquid form for transport by tanker ship.

Poland, one of the fiercest critics of Nord Stream 2, has entered agreements to buy U.S. LNG in a bid to reduce its dependence on Russian gas.

As part of the day’s diplomacy, Melania Trump spoke to the press in the Oval Office during a press conference with Duda and his wife. Coming off the success of the British trip, during which the First Lady was an important presence, perhaps it is a sign that she will be playing a more visible role in the future.

…[S]he spent most of it with her Polish counterpart but also joined the president and his staff for an update on the administration’s efforts to combat the opioid crisis.

‘I always say love yourself more than you love drugs,’ she advised.

She also talked about how her Be Best initiative was ‘working with the families and our youth to defeat the stigma and talk about the opioid addiction problem and it’s very important to open up and ask for help.’

She promised to ‘continue to bring awareness to how dangerous drugs are.’

interesting times.
was in germany in late 80’s when warsaw pact was still in effect.
had to log/follow/etc many soviet plated vehicles.
sort of difficult to see whats happening today w/o letting bias from then creep in.

With the German decision to reduce military expenditures below the amount agreed upon while Trump was visiting, it is just time to give up on NATO. Like we have done with Trade, we need to move to Bi-Lateral agreements.

AHA! Our puppet president plays RIGHT! into the Russians’ hands!
Hello, is this thing on?

Poland recently built a series of high tech watchtowers along its border with Kaliningrad. They also signed non NATO military pacts with Lithuania and Ukraine. They also stood up a fast reaction brigade composed of Lithuanian and Ukrainian troops called something like LITHPOLUKR. It’s a real brigade unlike Germany’s supposed spear tip force with Dutch and Norwegian troops (all paper no teeth).

Germany is no ally.

Good that we are not sending more troops to Europe but rather transferring them from ungrateful Germany to grateful Poland.

Maybe Poland can send 1000 troops to defend the US Southern Border.