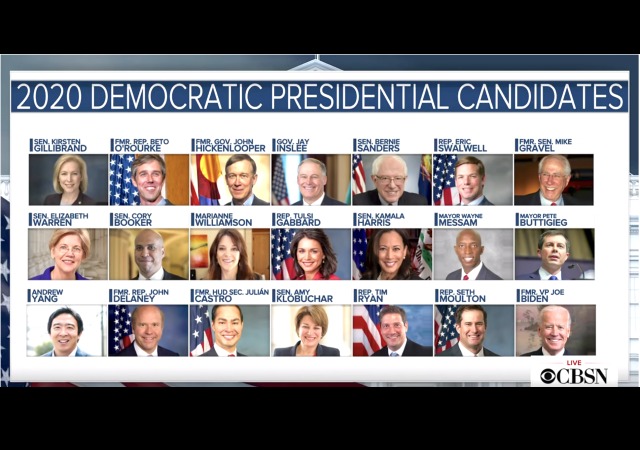 America has never seen such a large field of Democratic contenders for president. There are more choices than ever, yet a majority of voters are saying, “meh.”

It’s like that moment when you think you’re hungry, so you open the fridge, stare at all the food for a minute and then close the door and walk away.

Despite boasting a field of more than two dozen candidates for the 2020 Democratic presidential nominee, the most recent Harvard/Harris poll shows that the 6 out of 10 voters find the slate of choices to defeat President Donald Trump to be “underwhelming.”

The poll, conducted online within the United States from May 29-30, 2019 among 1,295 registered voters, found that just 40% of American voters find the Democratic options so far to be “impressive” when asked, “Do you find the current field of Democratic party candidates for president to be impressive or underwhelming?” 60% of participants answered “underwhelming” during this survey.

You can see the full results here.

Meads breaks down the most important findings:

Still, Clinton performed better than Sen. Kamala Harris (D-CA) and Sen. Elizabeth Warren (D-MA) who each earned 3% as the “best chance” to defeat President Trump in 2020. Sen. Bernie Sanders (I-VT) came in at second place on this question with 11% of voters believing that the Democratic Socialist was the top choice who could most likely prevent a re-election of the current Republican commander-in-chief.

This poll also offers good news for Trump. His approval rating is improving.

Jonathan Easley writes at The Hill:

President Trump’s job approval rating is the highest it’s been in two years, boosted by voter optimism about the economy, according to the latest Harvard CAPS/Harris Poll survey.

The survey found that 48 percent approve of the job Trump is doing, compared to 52 percent who said they disapprove. That’s up from 45 percent approval in March. The last time the president’s job approval rating reached 48 percent in the Harvard CAPS/Harris Poll survey was in June of 2017.

It’s still early to be looking at polls. The first Democratic primary debate is at the end of this month.

Everything could change after that.

To think that JFK probably couldn’t get on the ballot as a Democrat.

Now, those would be damning words.

Do you really think that if JFK was running today his stand on the issues would be any different than the rest of the clown car?

Nope, considering his brothers and their moves.

Twenty dems, all with the same message: We’re going to put back all the regulations that Trump removed, crank all of your taxes up, fling open the southern borders to anybody who wants to come in and make them all voters, and if you object to any of it, we’ll call you a hater and sic a few thousand Social Justice Warriors on you while we work on prosecuting. Oh, and we’ll take your guns.

I find them impressive. Just not I’m the way they expect.

I’d much rather spend my time speculating on Republican candidates for 2024 than thinking about anyone in this bushel of abominables.

I think Biden would play well enough in the Midwest to give Trump trouble, but the economy is doing great. So…I dunno.

He doesn’t have to do well in the Midwest. If he can claw back Michigan, Wisconsin and Pennsylvania, he probably wins. We are really hanging by a thread.

It’s like that moment when you think you’re hungry, so you open the fridge, stare at all the food for a minute and then close the door and walk away.

The perfect simile! Thanks Mike!

Probably couldn’t come up with an IQ equal to a large men’s shoe size if you added the dem “challenger” IQ’s all up.
I love what Trump has been doing overall (I do have gripes with him) but compared to the loser leftist field he’s so much better than anything the left has to offer.
Stacy Abrams getting the presidential nod from democrats would be a hoot though. Ever see the meme of her eating corn on the cob? Savage.

There are no losers here. Give them all a trophy and send them home. They won’t be president but at least they’ll feel good about themselves.

With Biden in the field, I’m reminded of a joke from decades past.

Ted Kennedy is hosting a party on his boat with Gary Hart, John Edwards, Joe Biden, and a bunch of co-eds, when one of the girls falls over the side.

Why not find them underwhelming,in a Constitutional Republic they have put forward a veritable smorgasbord of Socialists and Marxists,all of which are incompatible with said Republic.

While campaigning…who is doing their job? The job the taxpayers are funding?

A elected official should resign if they choose to run for another office.

Any of them who’ve been elected to anything are of much greater benefit to the public if they aren’t doing their job.

Never before in the history of this nation has there ever been assembled, in one group at one time, such a collection of losers, liars, thieves, crooks, traitors, and clowns. To think that anyone with a functioning brain would even consider voting for any of them is a frightening thought indeed.

Maybe they should hold their debates in Mos Eisley…

There isn’t anyone in this mob, even if they weren’t all Marxists and liars, with the brain-power of a good convenience store clerk. None of them are fit to be in charge of anything.