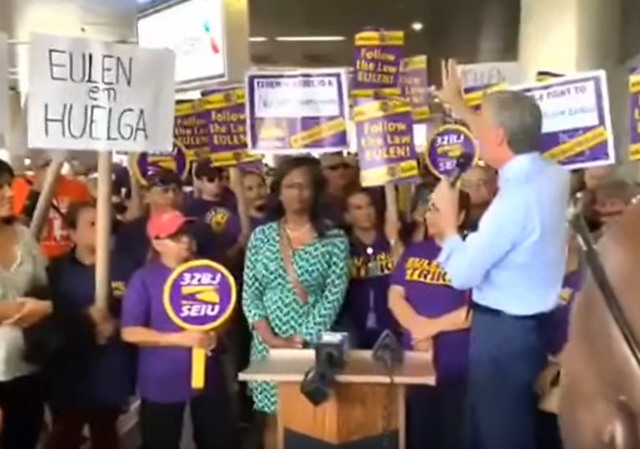 It’s astounding that he would say this in Miami, of all places. The city is home to many people whose family members were murdered by the radical revolutionary.

New York Mayor Bill de Blasio became the latest presidential candidate to flash a little español this week when, during a political rally Thursday, he pulled out a Spanish phrase he thought might motivate workers striking at Miami International Airport.

But instead of endearing himself to South Florida’s Hispanic diaspora, an apparently unwitting de Blasio uttered a revolutionary rallying cry deeply associated with Fidel Castro’s Communist revolution and a man viewed by hundreds of thousands of Cuban exiles as a sociopath and mass murderer.

In a gaffe that forced him to apologize hours later, de Blasio quoted notorious Argentine revolutionary Ernesto “Che” Guevara as he spoke Thursday in Terminal D to contract workers protesting poor pay and unsafe conditions. The big-city mayor apparently thought he was saying something akin to the United Farm Workers’ co-opted Si se puede! and instead dropped Che’s most famous quote — instantly enraging Florida Democrats and illustrating concerns that some of the Democratic Party’s biggest figures remain ignorant to the intricacies of Miami politics.

“This is the problem that we run into all the time,” Annette Taddeo, a Colombian-American state senator who spoke at the rally before de Blasio, said of the nuances of campaigning in South Florida. “The left has [some] people that are just clueless as hell.”

I did not know the phrase I used in Miami today was associated with Che Guevara & I did not mean to offend anyone who heard it that way. I certainly apologize for not understanding that history. (1/2)

I only meant it as a literal message to the striking airport workers that I believed they would be victorious in their strike- BdB. (2/2)

Not everyone is buying de Blasio’s excuse of ignorance on the topic. In 2014, during an interview with Jon Stewart on the Daily Show, he joked about owning a Che shirt.

From the CNN Political Ticker:

“How is it stepping into his tiny, tiny shoes?” Stewart asked. “How frightened are people when you walk in, because they must think now, you are coming in there and turning everything upside down, the uncertainty must be palpable.”

De Blasio responded with a dig at his own populist roots: “I don’t wear the Che Guevara T-shirt at work. I have thought about that.”

He also joked about hanging Che posters in his office:

After being elected Mayor of New York City, Bill de Blasio said “the Che Guevara posters,” he hung up in the Mayor’s office were “very popular.” pic.twitter.com/pLxvZ5VlB2

This was a gaffe for the ages, and tells us everything we need to know about de Blasio.

Halfwit?
You give him entirely too much credit!

“I did not know the phrase I used in Miami today was associated with Che Guevara & I did not mean to offend anyone who heard it that way. ”

Yeah, he just thought it was a translation of a Lenin quote.

He is an idiot. Either he knew what he was saying and didn’t know anything about Miami, or he didn’t know that and should have known if he’s going to be a leftist muckraker.

It sounded like “hasta la victoria siempre” — until the victory always, maybe that means until the permanent victory?

A leftist of national and social distinction.

With all the totally idiotic things the Dem candidates have been saving, video just may be their #1 enemy.

Is this the Che t-shirt he wears?

What a malignant oaf.