As usual, the mainstream media treats a Republican president differently than they would a Democrat president because narratives. 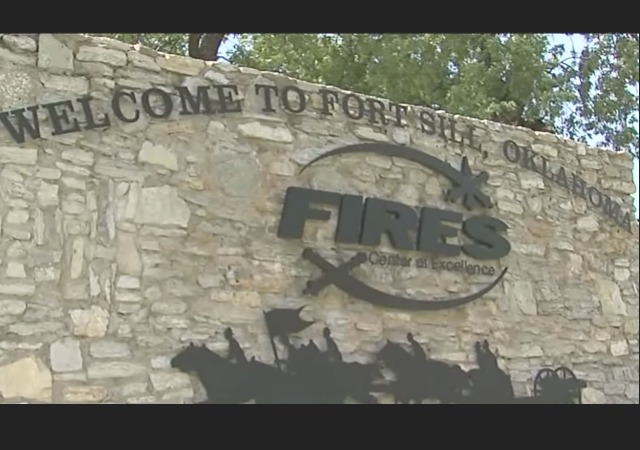 President Donald Trump’s administration has a short-term plan to house illegal immigrant children traveling with an adult family member or guardian. While historically this news has barely blipped on the MSM’s radar during Democratic administrations, the mainstream media wants to make you angry about it because a Republican president decided to use a military base that was once a Japanese internment camp.

USA Today was just one of many news outlets that breathlessly reported the news:

The Trump administration plans to house up to 1,400 unaccompanied migrant children in an Oklahoma military base that once served as a Japanese internment camp during World War II.

The base, Fort Sill, held 350 Japanese Americans following the 1941 attacks on Pearl Harbor. Over 120,000 American citizens of Japanese descent were sent to internment camps during WWII over perceived security concerns.

The move, which was first reported by the Associated Press, was confirmed to USA TODAY by Evelyn Stauffer, spokesperson for the Department of Health and Human Services’ Administration for Children and Families (ACF).

It’s not until the fifth paragraph, located below the large video ad on the page, that the newspaper tells you that this military base was also used by the Obama administration to house unaccompanied illegal immigrant minors in 2014:

This is not the first time the federal government has used military bases for migrant housing. The Obama administration used Fort Sill and other bases to house migrant children from Central America during a 2014 influx but closed the facilities following a public backlash.

Predictably, opportunistic Democrats pounced and seized on these stories:

The internment of Japanese Americans is a stain on our history. It abhorrent that 75 years later, this administration now wants to hold migrant children in one of those same camps.

We will look back on Trump’s racist child prisons as an abomination. https://t.co/DOBxbhdrcd

We will look back at this moment in time and ask ourselves what we did to put a stop to these horrific, inhumane policies. Speak up. Speak out. Be on the right side of history. https://t.co/cnm4ME5IVw

History is repeating itself on OUR WATCH. Remember that. We can’t say we did not know. https://t.co/aQVGUO7nuA

In addition to TIME/AP and USA Today, other mainstream media outlets rushed to join in on sensationalizing news reports about the base housing the children. Here are just two of many examples:

Migrant children will be kept at Army base used as a Japanese internment camp in World War II https://t.co/eWMmTEvOsx pic.twitter.com/f57mw234T6

The Hill was one of a few news outlets that covered the Obama story in 2014. Strangely enough, that report mentioned nothing about internment camps:

Thanks to @JerylBier for tracking down this @thehill report from 2014. No mention of “Japanese internment camp.” At least the headline doesn’t say Republicans “pounce.” https://t.co/ISyFSL0HQN

The Washington Free Beacon‘s Alex Griswold analyzed the media’s coverage of the “former internment camp” then versus now and came up with results that should surprise no one (bolded emphasis added):

It’s obvious why the focus is where it is. The Trump administration is detaining thousands of migrant children, that is bad, and just like Japanese internment. Got ‘im!

Obama’s 2014 move appears identical to Trump’s today. And yet, CBS’s coverage of the children being held in Fort Sill didn’t mention Japanese internment. Neither did The Hill‘s. Neither did TIME‘s. Needless to say, most of the other outlets running with the “Japanese internment” angle didn’t even bother to cover Obama sending kids to Army bases, and certainly didn’t muster outrage at the prospect. If the irony and bad optics of detaining migrants at Fort Sill is so obvious as to deserve top billing, one wonders why it escaped the media’s notice when a Democrat was doing it.

Not only that, but since the mainstream media are so interested in giving readers history lessons on the military base used as an internment camp during WWII, why don’t their lessons extend a little further to note that it happened under a Democrat president’s administration? Odd, that.

This latest example of faux outrage is like the “Trump administration is using cages to detain children!!!” narrative from 2018 where the mainstream media used images of kids in cages at detention centers from 2014 and 2016 to bash Trump.

It’s also reminiscent of the mainstream media’s false smear of President Trump over his comments on the 2017 Charlottesville riots. People have debunked their lies over and over, but they keep marching on with them as though they’ve done nothing wrong in painting such an inflammatory picture. Democrats, naturally, have run with the debunked story, too.

You’d think firefighter journalists who spend significant chunks of time on social media and TV talk shows demanding that Trump tone down his “inciteful” rhetoric would do the same thing, wouldn’t you? But they don’t, even though they have a responsibility and duty to report things fairly and accurately to inform readers rather than unnecessarily fanning the flames.

Trump knows the media by and large refuse to practice what they preach, which I suspect is one of the reasons why he threw the one-sided rules for presidential civility out the window long ago.

What’s the real story here? It’s not that these children will reside in a former internment camp, and it’s not that the Trump administration lacks a long-term plan to house unaccompanied minors. It’s that Democrats are deliberately using stall tactics to delay action on Trump’s request for $4.5 billion in funding for the crisis:

The punchline, by the way, is that the administration is having to reconfigure existing facilities partially because congressional Democrats refuse to give Trump money to build new detention spaces. They don’t want people detained in the first place so they’ve choked off funding. Fort Sill is the stopgap solution DHS has been forced to come up with. Just a few days ago, the NYT begged Dems not to be so recalcitrant and to appropriate money to ease the humanitarian problem at the border, at least. If the media’s truly concerned about a military base — sorry, I mean a former Japanese internment camp — being used to house illegals, they should lean on Pelosi.

They are INVADERS … pure and simple.

It really is … a war our politicians are only too willing to readily lose.

Wait until they find out that Ft. Sill is a training center for artillery as well as for basic training.

Being a large base, it also has lots of things that could help these kids. They will be better taken care of there than in some other makeshift resource center.

On the other hand, we are talking about illegal, unaccompanied children. They can’t just be let go and set free. Where should they be housed? It’s a secure facility and otherwise useful.

This is a comparison of apples and oranges.

There might be some dorms at Oberlin coming available soon. I heard they were cash-poor and might need some extra cash flow. (/s)

What’s the problem? Democrats would just take them out in the country and set them free. Like unwanted pets.

I’m a little disappointed that the lame-stream media didn’t also mention that courageous 19th-century hero/freedom fighter Geronimo was imprisoned there until his death.

How about we toss the back over the border, like we do with small fish? Rather adults or children, they are invaders hoping to get their families on the chain immigration gravy train.

wants to make you angry about it because a Republican president decided to use a military base that was once a Japanese internment camp.

Actually there’s nothing wrong, in custom, in law, or in principle, with internment camps for foreign nationals (or ships, or aircraft, etc.) But the great crime of the liberal demi-god FDR was that these internees were not foreign nationals. Over half were Americans. And none of this “Japanese-Americans” crap. Though of recent Japanese ancestry, they were Americans. Period. The Supremes later acquiesced in this crime. (Korematsu v. United States, one of SCOTUS’s “Dred Scott”-class decisions.)

At least on the facts presented to the Supreme Court in Korematsu, Americans of Japanese descent were not interned. I don’t know whether internment actually did happen; I’ve seen evidence both ways, but what I gather is that it did happen but wasn’t at issue in that case. Korematsu was not challenging his internment (if any), but his exclusion from three states; he was free to go anywhere he liked in the other 45. The Supreme Court said that when the national security is under threat this is a reasonable restriction on a citizen’s freedom. Maybe it was wrong, but it can’t be compared to a decision that the whole constitution doesn’t apply to black people.

The very idea of expecting the democrat media to EVER be anything remotely resembling “news” instead of propaganda is akin to the parable about the man who rescued a rattlesnake, that went on to bite him: as the man lay dying, he asked the rattlesnake, “I saved your life – why did you bit me?” The rattlesnake replied, “Because I’m a rattlesnake.”

The mindset of progs, leftists, liberals – whatever you want to call them – will never change. Ever. Historically in America, their numbers were small, and communism was almost universally recognized as the genocidal disaster it has been.

The problem we face now is that we stood by while progs, leftists, liberals – again, whatever you want to call them – we allowed to completely infiltrate our schools, our news, etc. Now, they have infiltrated our government to a great extent. Whether by George Soros’ money or GOPe treason, we have only ourselves to blame for having been so politicaly lazy. The fact is, we’ve lost the ‘citizenship factories’ that created ‘Americans,’ and those factories have ultimately created the millenial generation, and all the garbage along with it, including the likes of alexandra cortez, or unabashed Jew-haters like tlaib and omar. Hell, it’s even created a rat like mittesn romney passing for a Republican.

The bottom line is we’ve lost the media. They represent leftist interests, and tbey are wholly propagandists. One might even assume they even run the whole program. Treat them like the malignant propagandists they are.

I say the key takeaway from this is that Trump thinks any non-Caucasian deserves internment, especially if they’re children.