Memo to Joe Biden: Republicans Are Not Likely to Go Back to the Old Ways in a Post-Trump Era

Memo to Joe Biden: Republicans Are Not Likely to Go Back to the Old Ways in a Post-Trump Era

Biden may think he has it all figured out, but Republicans are not likely to go back to the way things used to be done once Trump is out of office. 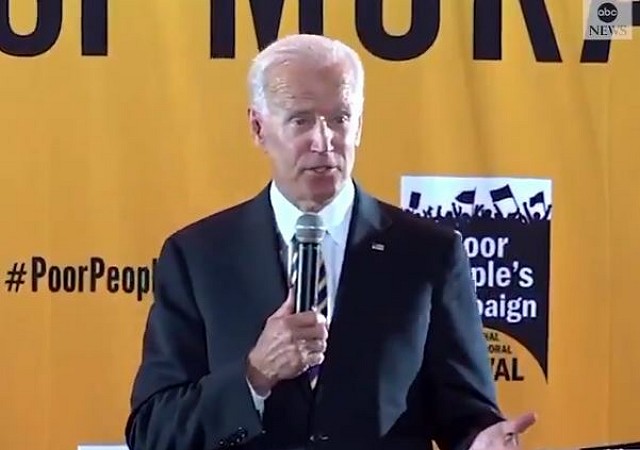 As he has done often since officially announcing his candidacy for president back in April, Joe Biden talked on Monday at a liberal forum about how in his view it is essential to have a Democrat in the White House who can work with Republicans.

Former Vice President Joe Biden on Monday forcefully pushed back against criticism that he is naïve to think Democrats can work with Republicans in Congress after President Donald Trump leaves office.

Biden has campaigned on his ability to cut deals with GOP leaders, arguing that some Republican lawmakers will change if Trump is ousted in 2020. His leading Democratic rivals have instead railed against a political system they say has long been broken and must be changed, and critics of Biden’s approach have said his approach ignores Republican efforts prior to Trump to obstruct Democrats, particularly during the Obama administration.

“If you start off with the notion there’s nothing you can do, well why don’t you all go home then, man? Or let’s start a real physical revolution if you’re talking about it. Because we have to be able to change what we’re doing within our system,” Biden said Monday at the Poor People’s Campaign Presidential Forum in Washington.

Watch this segment from the forum below:

Here’s the full transcript of Biden’s remarks at the forum on this issue:

Biden on compromise/GOP: "If you start off with the notion, there is nothing you can do, then why don’t you all go home, then, man? Or let’s start a real, physical revolution if you are talking about it. Because we have to be able to change what we are doing within our system." pic.twitter.com/6Iki2oQlRy

Biden told a crowd of supporters last month he believed that once Trump was out of the White House that Republicans would be more willing to work with Democrats again:

Presidential hopeful Joe Biden said Tuesday he believes Republicans will have an “epiphany” and be more willing to work with Democrats when President Trump leaves office.

“I just think there is a way, and the thing that will fundamentally change things is with Donald Trump out of the White House — not a joke — you will see an epiphany occur among many of my Republican friends,” the former vice president said during a campaign stop in New Hampshire, adding that the GOP feels “intimidated” by Trump.

Part of Biden’s rationale for thinking this way is because he was viewed as Obama’s “dealmaker” for the 8 years they were in office. He was successful a handful of times at persuading a few (mostly) moderate Republican Senators to see things the administration’s way on key pieces of legislation. He sometimes hammered out deals with McConnell himself.

But that was then and this is now and his critics are more right than wrong. Republicans are not likely to go back to the old ways once Trump is out of office.

Trump was elected, in part, because average Joe and Jane Republicans across America became frustrated with the system over time and believed Republicans in Washington, DC were not fighting hard enough for their interests and not getting enough done.

They were concerned about illegal immigration, and what would happen with the Supreme Court. They worried about their religious freedoms. They were also highly distrustful of a mainstream media that viewed and treated conservatives contemptuously, and that gave Democrat wrongdoers a pass.

Republicans wanted a scrapper who would push back against all of that, and they got one when they elected President Trump.

I was against Trump in 2016 because I didn’t view him as a true conservative and believed he had significant character flaws. I also didn’t see at the time what other people who supported him did.

However, since he was elected, over a period of time it became clear what his supporters saw. That despite his many character flaws he has been willing to go the mat for Republicans against hardline Democrats on a number of fronts, like putting conservative justices on the Supreme Court, making combating illegal immigration a top priority, standing firm on pro-life and religious freedom issues, and pushing back on the transgender agenda.

And, of course, he has not remained quiet and allowed the left-leaning mainstream media to set all the narratives.

Biden is right in that voters want a President who will get things done. But where he’s off the mark is in believing Republicans in DC are interested in bipartisanship. Republicans understand now more than ever that when Democrats call for working together in the interest of “getting things done”, it means Republicans coming more over to their side of the aisle than Democrats meeting them in the middle.

Republicans also understand in this day and age that when Democrats demand “civility” and a return to decorum, that what they’re really asking for is for Republicans to roll over and be quiet while liberals ram through their far left agenda items like the Green New Deal and the Equality Act.

Biden may think he’s got it all figured out, but if he happens to become the Democratic nominee and goes on to defeat Trump, there is a strong likelihood that he will find out the first time he tries to work with Congressional Republicans that his critics were indeed right all along.

Yes, if Trump leaves office, the Republicans will be more likely to work with Democrats again. On raising taxes, opening up the border, increasing regulations, etc…

That’s why we want to keep him.

I agree 100%. THe Rs will fold quicker than [insert analogy].

notamemberofanyorganizedpolicital in reply to LeftWingLock. | June 19, 2019 at 9:19 pm

Today’s life-long GOP Republicans are better Democrats,
than the new crop of Dems.

Time for a new party (lead by Trump)?

Let she who is without “character flaws” cast the first stone, Sister.

You are right that Biden is old school, and that he believes in bipartisanship. However, his party left him long ago, and showed it by throwing out Joe Lieberman.

The reality is, the party that Joe Biden grew up in would have been delighted to co-operate with DJT because DJT has espoused and advanced policies they have supported until only recently.

If he had run as a Democrat, they would be calling him the second coming of JFK. Instead, they are frothing at the mouth because he is doing the things they promised to do, and succeeding.

The Republican Congress is STILL cooperating with the Dems against Trump. And, it doesn’t look like a significant number of anti-Establishment Republican politicians have been elected lately. If John McCain had been a Democrat and voted and supported the Republican Party, as McCain supported the Dems, he would have been primaried out before the paint had a chance to dry on his office door.

Biden is right. If Trump is defeated, the Republican leaders and Congress Critters will continue the Pre-Trump status quo.

I guess Obama, Biden, and Jeb are still waiting for that “fever” to break.

If Trump said anything about “start a real, physical revolution”, CNN’s website would be so loud that you would hear it all the way from facebook.

It’s true that Biden hasn’t learned anything from the last four years or so, and as some above have noted, neither have certain Republican pols and pundits.

Sadly, it seems there is no segment of the political landscape about which this cannot be said. Which raises only one question:

All the people still bellyaching about those who demonstrably HAVE learned? When are you going to catch up and see what we see?

This is what he said to the poor people. And then to the rich people, it’s leaked that he said “nothing will really change”.

He’s probably the most gifted politician among the Dems. But this will sink him. He won’t be able to smuggle Kamala Harris into the WH as his VP, to take over when he croaks or otherwise leaves office.