The few bright spots are not enough to make it a glowing jobs report. 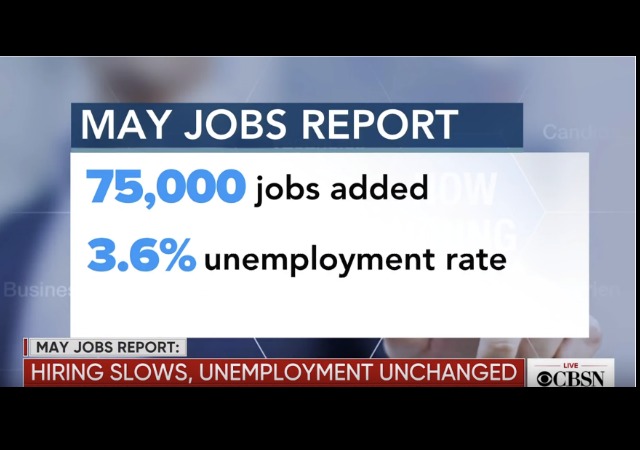 May’s jobs report is not great, but not necessarily bad. It does not help that the Labor Department revised down the otherwise great April and March jobs reports.

Experts predicted the economy would add between 175,000 – 180,000 jobs, so the 75,000 came as a shock. Hiring within the mining, construction, and manufacturing sectors had little change. Leisure/hospitality, professional/business services, and health care are the only bright spots within the report. 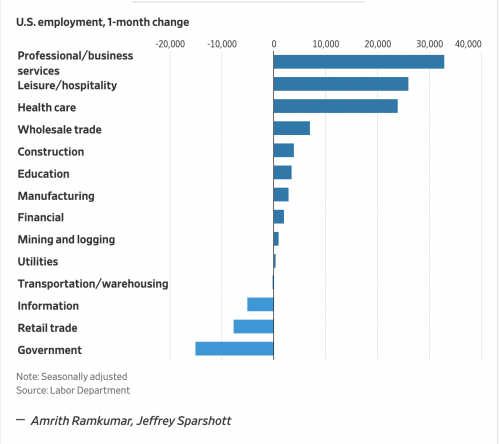 Those working or looking for work stayed at 62.8%. Eric Moath at The Wall Street Journal noted that if adults keep “dropping out of the labor force, rather than flooding into it, that could choke off a key source of fuel for the economic expansion.”

On the bright side, the unemployment rate stayed at a 49-year low at 3.6%, but those in the prime-age participation group (25-54 years old) who have a job or looking for a job went down to its lowest number since September 2018 at 82.1%. Unemployment for those without a high school diploma remained at 5.4%.

Unemployment for black men, black women, and Hispanic men went down, but it went up for Hispanic and white women.

So the low unemployment rate and growth in the first quarter of 2019 did little to inspire people to jump into the job market.

Is wage growth keeping adults away from the market? While wages have grown, it has not improved much. May showed an increase of 3.1% from over a year ago. So it remained over 3%, but it fell from April’s 3.2%. It helps that “inflation remains muted” so prices of goods have not increased too much.

I know some people will point to the trade war, but The Wall Street Journal considers it “a wild card.” After all, we will always have a trade deficit with China. It would take a while for us to come close to import numbers with China. The Labor Department also gathered the May information before President Donald Trump threatened tariffs on Mexican imports.

The unemployment rate and wage growth stuck out to me. One would think that in a competitive job market that companies would make themselves more attractive by offering higher wages.

On the other hand, the not-so-good jobs report could lead to the Federal Reserve to cut interest rates. RSM US Chief Economist Joseph Brusuelas said that a cut in interest rates could happen since “the data is even bleaker as the softness that has defined employment in manufacturing has spilled over into the service sector.”

The revised down April jobs report and blah May report is not good for the GDP.

You know if Hillary had been allowed to STEAL the election as they hooked and crooked for years right up until this day to do, then we would be lucky to not see numbers worse than the following headline.

I know the company I work for is having a devil of a time actually finding people (entry level full time factory work with benefits, paying over market wage, no skills or training preq) that will a: show up for work on time every day, and b: be capable of performing the mild manual labor involved.

Last report was a surprise on the positive side, this one on the negative.

Basically, the “experts” can’t keep up with Trump and how fast things move when you cut through the BS and just get it done.

There are always going to be fluctuations in hiring workers, and as the numbers improve as they have, you begin to tap in to those who claim they want a job, yet sit at home in their parents basement.
There are some of the millennial generation who seem to think they should be paid for just taking the job, and freak out when they hear they are expected to work.

Leisure/hospitality, professional/business services, and health care are the only bright spots within the report.

Another bright spot was the decline in gov’t employment. In that sector, less is more.

I see a drop of about 15,000 government jobs. To me, that is a bright side to the jobs report. Need less government!

I also understand that there are many companies which need a breather in order to absorb the newbies.

And, I don’t see the “weather” excuse that usually happens when there are snowstorms, a hurricane or whatever. But, in middle America, there are some of these weather issues for this month. I heard that there were some companies in the Tulsa area that are closed due to flooding, but they are still paying their staff. But, you can’t hire or expand when you are waiting for the water to recede.

So, I expect a rebound in the next few months.

All the numbers are excellent, eventually the hiring had to slow down

During the month of May, Trump ramped up tariffs on China and threatened tariffs on Mexico and yet the stock market is up bigly and we had a pretty good jobs report, all things considered. NPR’s usual cast of Leftist “experts” cannot explain why the economy and markets aren’t crashing. This is the same reaction as when Reagan won in a landslide.
.
What they can’t grasp is that Trump is handling the world brilliantly.
.
First, he does not negotiate from a political position. NPR thinks that he should be boosting the economy since he has an election coming up that will rely heavily on his economic performance. The thing is that Trump wants to make America great again. He puts his responsibility as president ahead of his upcoming election. No D.C. politician has ever done this before and it’s mind boggling to the pundits.
.
Second, maybe, just maybe, Trump is using our strong economy as a reason to make these global relationship moves now. Slapping tariffs on trading partners when we have only 75,000 jobs in an economy that is struggling with 6% unemployment and 1.0% GDP would be foolhardy. Doing the same when we have record low unemployment among all demographics and a sustained 3% plus GDP is just smart.
.
Trump was hired because he’s not a politician. It looks like the electorate was right. He’s exactly what we need now.

That’s about 75,000 more jobs than what the black baby jesus created in his entire 8 year reign of error.