Elizabeth Warren climbed to second place in the California poll. 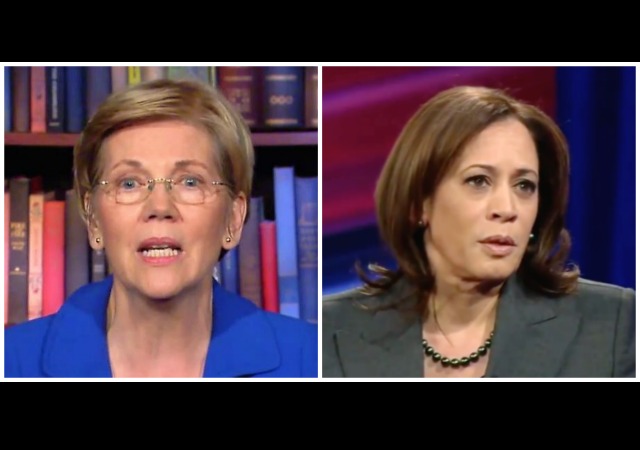 In the latest poll, she landed in fourth while Sen. Elizabeth Warren (D-MA) landed in second place.

California has become a significant factor in the Democratic primary since the government moved the primary to Super Tuesday on March 3.

Harris is only at 13%, which placed her in fourth. South Bend Mayor Pete Buttigieg landed in fifth at 10% while everyone else failed to top 3%. From The Los Angeles Times:

Harris draws consistent support from across demographic groups and ideological lines and is widely cited as a second choice by voters, but she has no constituency that she dominates, the poll found.

Although Biden leads the race, he’s far from a commanding front-runner in the state that will send the largest group of delegates to next year’s Democratic nominating convention. Biden has support from 22% of likely Democratic primary voters, the poll found. That’s similar to his level in a recent poll of voters in Iowa, which holds the first contest of the primary season, but well below his standing in some national surveys.

The poll provided Harris with some good news since 21% of the respondents chose her “as their second choice.” But Warren follows closely at 17%. Harris also “performed well across ethnic and demographic groups.”

But Warren leapfrogged everyone into second place as her image continues to grow nationwide. Over 6,000 people attended an appearance in Oakland the night before the California Democratic Party convention. She received the most attention out of other presidential candidates at a party in San Francisco with 5,000 delegates.

Harris has struggled in California polls since she announced her candidacy in January. An April Quinnipiac University Poll had Harris in third (17%) behind Biden (26%) and Sanders (18%).

On May 31, The Los Angeles Times pointed out Harris’s fall in the presidential race. The author noted that while she has won three races within California, not many know her:

Harris has won three statewide races, but remains a mystery to many at home. Surveys show nearly a quarter of California voters have no opinion of her job performance, suggesting they know little, if anything, about the state’s junior U.S. senator.

That is not unusual, said pollster Mark DiCamillo.

“You’re talking about 19 million registered voters in California, and for 19 million people to be universally aware of something you have to practically hit them over the head,” said DiCamillo, who has spent decades sampling voter attitudes in the state. “It’s not unusual for 15, 20, 30% of Californians to just be tuned out of politics.”

Defenders — who see sexism at play — say Harris’ perceived skittishness was a result of competing pressures: conservative law enforcement officials on one side, who were naturally suspicious of a mixed-race woman from San Francisco, and left-leaning criminal justice reform advocates on the other. They note she was an early and ardent advocate of impeaching Trump, leaping out in front of many rivals.

A day later, the paper published letters to the editor in response to the article. One man said Harris does not perform well because she comes across as a centrist on social issues, will not question military spending, or go after Wall Street.

Another man lashed out at the sexism comment about “conservative law enforcement official.” He said he “strongly” disagrees with that statement after he served 41 years as a California law enforcement officer. He also cannot think of any other officer who “would agree with that biased, unsubstantiated statement” because the skepticism over Harris stems from her “spotty performance as district attorney in San Francisco and as California’s attorney general.”

free stuff for everyone plays well in CA

Too bad for them there’s a whole rest of the country out there.

I’d be willing to bet that a high number of Californians who are turned out lean conservative. Following politics from that bent living in that state would be extremely frustrating, I might back off for sanity reasons, too.

oh, Warren would be a gift for Trump.

Big Chief must be a lot better at selling her freebie programs than Kamala. As a taxpayer, I know I can’t wait to pay for everyone else’s student loan debt after paying for my own kids college out my own paycheck. /s What ever happened to personal responsibility? Seems to be a principle the country is abandoning.

I’m with you. As a taxpayer, all of our taxes already provide a huge chunk to these schools. On top of that, those of us without kids would now pay even more for everyone else’s kids (we also pay more taxes without dependents to claim).

She “…can’t find her footing?” Maybe she should just stay on her knees; that seems to have worked for her so far.

Yeah, I think after it came out how she got her start in politics, millions of Californians who voted for her previously realized they hadn’t gotten theirs.

I’m sure she can win them back, but it’s going to be one hell of a job.

Does Harris look black to anyone? Her great(?)-grandfather was a slave owner in Jamaica… according to her father.

Both of these cranks are frightening dictators in waiting. We know Fauxcahontas is a corrupt POS, and we know Harris is at least a POS (though she could make it as a prostitute.)