PM Netanyahu: President Trump has “torn away the mask of hypocrisy.” 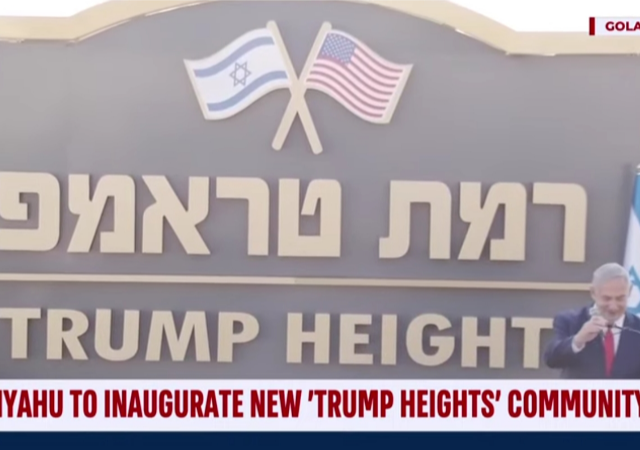 Israeli Prime Minister Benjamin Netanyahu has unveiled a new community in the Golan Heights named after U.S. President Donald Trump. The Israeli Prime Minister convened a cabinet meeting at the site on Sunday as part of the formal inauguration. U.S. Ambassador to Israel, David Friedman, along with officials from the Golan region attended the ceremony renaming the neighborhood of Bruchim to “Ramat Trump,” or “Trump Heights” in English.

The Israeli government’s decision to dedicate the community to the U.S. President is seen as a gesture of thanks for Washington’s recognition of Israel’s sovereignty over the Golan Heights. In March, President Trump signed an executive order to this effect. Israel first took control of the strategic mountainous plateau in the defensive war of 1967, destroying Syrian artillery positions used for shelling low-lying Israeli towns and villages.

“After 52 years it is time for the United States to fully recognize Israel’s sovereignty over the Golan Heights,” President Trump said in March, adding that the region was “of critical strategic and security importance to the State of Israel and regional stability.” The decision was met with fierce opposition from the European Union and Arab countries.

In a ceremony yesterday attended by US ambassador David Friedman, Prime Minister Benjamin Netanyahu announced the founding of a new settlement on the Golan Heights to be called Trump Heights (Ramat Trump), in honor of US President Donald Trump. The Israeli government also held its weekly cabinet meeting on the Golan. The founding of the settlement is meant as a gesture of particular gratitude for Trump’s recognition of Israeli sovereignty over the Golan Heights, which Israel captured from Syria in the 1967 Six Day War.

“Trump is the first international leader to have done this, and to have torn away the mask of hypocrisy,” Netanyahu said at the ceremony. “Begin (Israeli prime minister Menachem Begin) said that sometimes one has to state the obvious, and Trump has done so several times: in transferring the US embassy to Jerusalem; in cancelling the nuclear agreement with Iran and standing up to Iranian aggression in the Persian Gulf. We are proud to honor a great friend. We shall continue to develop the Golan for both Jewish and non-Jewish residents.”

“President Trump is a very great friend of the country,” Prime Minister said during the event, “a friend who did things for the country there were not done in the past and should have been done in the name of justice and truth.” On Twitter, he called the move ‘a historic day.’

Establishing a new community in the Golan Heights named after a friend of Israel, US President @realDonaldTrump. A historic day! ???????????????? pic.twitter.com/lvG8MJxtxq

The issues of the Golan is not the first time President Trump has stood up for Israel, defying the mainstream media, European leaders and Arab countries. In keeping with his election promise, he formally recognized Jerusalem as Israel’s capital in December 2017 and relocated the U.S. embassy to the Holy City.

Maybe they could name one of their roundabouts “Obama Way”.

Apparently it’s not an *actual* town or settlement. More of a placeholder.
I honestly don’t know what that means or if it matters tho.

Building homes in Israel is a very slow process. I doubt the first is in the ground before Trump leaves office in Jan 2025.

Sorry, “first shovel is in the ground”