Has North Korea executed another top official because of #HanoiSummit failure?

Has North Korea executed another top official because of #HanoiSummit failure?

Sec. of State Mike Pompeo said Washington was checking into reports of the envoy’s execution 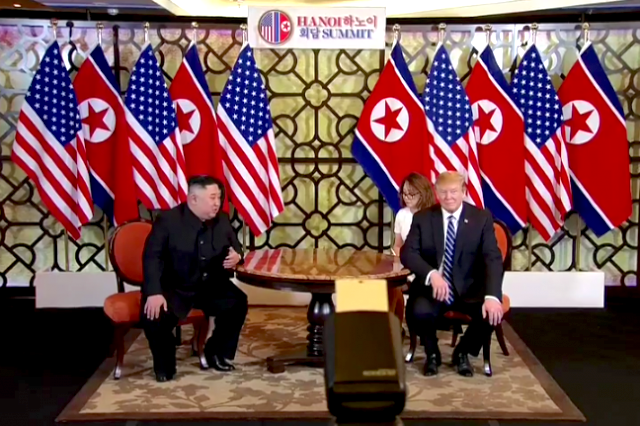 It is currently being reported across international media that North Korea’s nuclear envoy has been executed as part of a purge of officials associated with the Hanoi Summit between the U.S. and North Korea that ended abruptly with no agreement, joint statement, or indication of a path forward.

However, the BBC is urging everyone to treat this news item with caution.

The claims are incredibly difficult to verify and they are very often wrong.

Both the South Korean media and the government in Seoul have reported on purges in the past – only for the “executed” officials to turn up a few weeks later looking alive and well next to the North Korean leader Kim Jong-un.

On this occasion, a single anonymous source has told a newspaper in Seoul that Kim Hyok-chol, the former North Korean envoy to the US and a key figure in talks ahead of the summit between Kim Jong-un and Donald Trump in Hanoi, was executed at an airport in Pyongyang.

The source claims that he was punished alongside four other foreign ministry executives. They were all charged with spying for the US and poorly reporting on the negotiations without properly grasping US intentions.

Secretary of State Mike Pompeo indicated that the U.S. is looking into these reports in an attempt to confirm their veracity.

South Korean newspaper Chosun Ilbo reported that Kim Hyok Chol, North Korea’s special envoy to the US, was executed after Kim Jong Un and Trump were unable to reach an agreement at their second summit in February.

“We’ve seen the reporting … we’re doing our best to check it out,” Pompeo said during a joint press conference with the German Foreign Minister Heiko Maas in Berlin.

…The paper — quoting unnamed North Korean sources — said Kim Hyok Chol was executed in March at the Mirim airport in Pyongyang on charges of “being recruited by US imperialists and betraying the supreme leader.”

The South Korean publication also reports that other key officials have been punished for the negotiation failure as well.

Kim Yong Chol, Kim Jong Un’s right-hand man and the counterpart to Pompeo before the Hanoi summit, had been sent to a labour and reeducation camp in Jagang Province near the Chinese border, the Chosun Ilbo reported.

Officials who worked with Kim Yong Chol have been out of the public eye since the summit, while seasoned diplomats who appeared to have been sidelined, including vice foreign minister Choe Son Hui, were seen returning to the spotlight.

Andrew Kim, former head of the CIA’s Korea Mission Center, said North Korea would test-fire “one or two more missiles” at times selected by its leader Kim Jong-un and then return to the negotiation table with the United States to discuss denuclearization.

Kim made the remark during a panel discussion on the sidelines of an annual intelligence meeting at Westin Chosun Hotel in Seoul, Wednesday, hosted by the Institute for National Security Strategy (INSS), a think tank under the National Intelligence Service of Korea.

…Kim said the North’s future test-firings, if any, would be to satisfy “internal needs,” not for the widely speculative reason of “shaking up the negotiation framework” with the U.S.

“If the last test was successful, no more test-fires would happen,” he said. “But if it failed, it would fire more during a certain period of time. In my view, one or two more test-firings are possible, and then (it) would return to the negotiation table.”

I’m confused. So, unnamed sources might not always be accurate? Has anyone told the NY Times?

“On this occasion, a single anonymous source…”

Yeah, I think I’ll wait before any hair-on-fire reactions. Amazing how fast the MSM pounced, though. Well, not so amazing considering that it makes Trump look bad.

Since Kim is so inventive as to modes of execution, I wonder what he cooked up for this… if it happened?

Maybe he mounted the departed diplomats on the missiles they test fired.

When the NORKs execute someone, first they break in all their teeth. So the person can’t shout out anything defiant about the dear leader.

It’s kind of funny. Hate is expensive. I can’t afford it. And BTW you can’t either. I don’t care who you are.

Never have I witnessed a NORK execution. In person. But I’ve seen the videos.

Maybe I could be misunderstood. It’s not important for you to watch the NORK execution vids. It was important that I watched. It was my business. And it didn’t scare me. Instead it just made me angry.

I don’t particularly like gay people. But I don’t hate them either. When I see the Mullahs in Iran hanging them from cranes it makes me angry.

He was forced to listen to barack obama speeches, while staring at close-up photos of michelle obama, while slowly being poisoned by uranium from the hillary clinton russian collection.

The coup de grace was being forced to eat something cooked by alexandra cortez.

If dealing with these commie cult of personality morons will get people killed on a whim, why not just leave them to their own devices and not engage?

People don’t appreciate being born in the USA.

Maybe the “anonymous“ source is Kim Jong-un, just checking to see how the rumor mill in NK works.

Maybe the talks were not meant to fail? Maybe the Nork team fucked things up and now they are paying the price for that fuck up?

But before talks begin Lil Rocketman needs to demonstrate his virility or something like that to his people and then get back to the business of opening his country up to trillions of dollars in lovely uncle Sam sugar.