German Foreign Minister Will Visit Iran to Save Nuclear Deal

German Foreign Minister Will Visit Iran to Save Nuclear Deal

German Foreign Ministry: “We standing clearly on one side…to preserve the nuclear accord.” 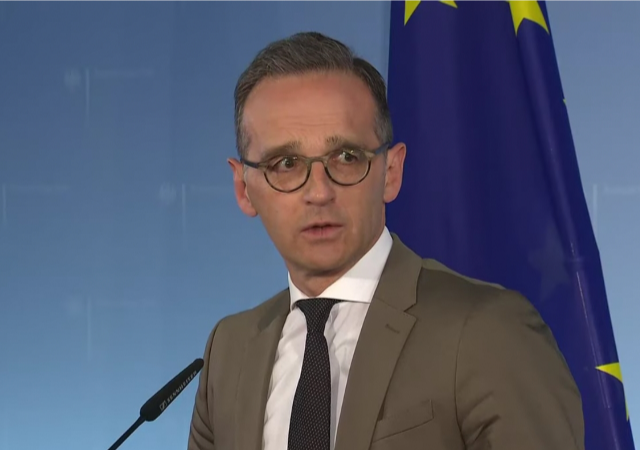 German Foreign Minister Heiko Maas will travel to Iran next week in a desperate bid to save the nuclear deal. Berlin is coordinating this latest diplomatic move in consultation with the UK and France, the German state media confirmed.

The move comes just weeks after Iranian President Hassan Rouhani threatened to flood Europe with drugs and illegal immigrants if the European powers fail to get Iran’s faltering economy back on track. “You are obliged,” he warned Europeans last month, “for your own security, for protecting your youths against drugs as well as controlling influx of immigrants.”

Tehran expects Germany, France, and the UK to protect its lucrative oil trade in the face of mounting U.S. sanctions. Otherwise, the regime has threatened to boost uranium enrichment and openly pursue its nuclear objectives.

Heiko Maas has announced he will travel to Tehran next week in an effort to salvage the Iran nuclear deal. Maas, the first German diplomat to visit Iran in over two years, will meet counterpart Mohammad Zarif on Monday.

He will explore options to preserve the “Joint Comprehensive Plan of Action” (JCPOA), more commonly known as the Iran nuclear deal.

Germany has reiterated its commitment to the Obama-era deal. “We standing clearly on one side…to preserve the nuclear accord,” a German Foreign Ministry spokeswoman said Thursday.

“Europeans are on the same page: If Iran does not uphold the deal in its entirety anymore, then the deal is dead.” Germany’s Süddeutsche Zeitung wrote. “If Iran starts enriching Uranium, the U.S. military strike against the nuclear facilities and the installations of [Islamic] Revolutionary Guard become a concrete option,” the newspaper opined.

While President Donald Trump has refused to budge in the face of Iranian threats, Germany has been keen to appease the angry Mullah regime. “If Iran wants to fight, that will be the official end of Iran. Never threaten the United States again,” the president tweeted last month. Following renewed threats from Iran, German politicians have been urging the foreign minister to head to Tehran. “Maas needs to visit Tehran immediately to keep Iran within the accord,” Omid Nouripour, The German Green Party’s foreign policy spokesman, had demanded.

So far, the U.S. pressure has prevented the European Union from floating the planned ‘special purpose vehicle’ to protect Iranian oil trade from sanctions. The payment system, named Instex, seeks to hide the EU-Iranian money trail and shield European companies from prosecution under the U.S. law.

The Trump administration is committed to countering the EU-backed payment system, which it sees as a mechanism for money laundering and financing jihad terrorism, especially in light of the central role played by the country’s Islamic Revolutionary Guard Corps (IRGC), a designated terrorist group, in Iran’s oil and other vital sectors.

Despite repeated assurances to keep the perks the Obama-era deal flowing, the European powers have failed to offset the impact of the U.S. sanctions. Reeling under ever stiffening sanctions, Tehran has set a July 7 deadline for the Europeans to renegotiate the 2015 deal.

It seems that Iran has been steadily building additional reservoirs and hydroelectric facilities, hundreds of them. They are attractive targets, start a campaign of knocking them out. Two a day for the first month, 4 a day for the second month, 8 a day for the third month, and then start to take out the rest of their power grid. Follow that by knocking out all their oil production and refiniaries.

We should have kicked the shit out of them when they held our people hostage. Pound them into the stone age.

Give NK something to think about.

It appears that Iran is desperate. To threaten to flood Europe with drugs and illegal aliens sounds like blackmail at best, or a direct threat of war at worst. And the Europeans are caving to them. At least the Iranians themselves have now admitted that they are a narco-terrorist state.

There’s a sizeable faction within the Merkel administration that is virulently anti-American and very pro-Russian. The same faction includes German academics and EU bureaucrats. Little of that part of the story is seen in English publications.

The P5 +1 Iran deal was largely crafted by this weird EU group, the Russians, Chinese and Obama’s group via Catherine Ashton at the Davos “one on one” no-paper meetings with Iran’s foreign minister Zariff. Obama essentially granted the EU’s foreign minister Ashton power to negotiate the terms for America. Note – good luck with trying to find the media articles mentioning the “no-paper” deal.

Ashton has been leading the group of six world powers — the United States, Great Britain, France, Russia, China and Germany — that are currently conducting talks with Tehran since 2010. Her term as the EU’s high representative for foreign affairs and security policy

Catherine Ashton, the EU foreign policy chief, has faced down the snootiness of French diplomats, and what she once called the “latent sexism” of Brussels, to become the unlikely peacemaker between America and Iran

The agreement, which halts Iran’s most sensitive nuclear activity, its higher-grade enrichment of uranium, was tailored as a package of confidence-building steps towards reducing decades of tension and ultimately creating a more stable, secure Middle East

What a bunch of cucks the EU minions are.

Iran has set a deadline of July 7th for Europe to fix this for them.

I’d tell them to pound sand and grow up, they have enough of both to do.

Germans always side with the worst. Not a nickels worth of difference in the Nazi’s and Iranians.

German commerce with Iran is enormous and is the only reason the German Foreign Minister is going to Iran. Trump ought to kick Germany out of NATO if they continue down this road. Heck, their military isn’t functional anyway.

That would have an even bigger impact on local and regional economies because those bases are major employers and suck in a shit load of services from local businesses.

If das Reich wants to fuck about with the eye-ranians then let them suffer the consequences of their actions.

Also I dont think das Reich completely understand that without America there is no deal.

We just need to get the hell out of Germany. Move our bases to Poland.

Someone needs to draw a cartoon if this German minister in a Chamberlain hat and umbrella in the crook of his arm. What mind numbing insanity to believe you can negotiate with evil like this.