They came up with an “original promotion while brainstorming ways to celebrate the Fourth of July in a way that reflected the community’s values.” 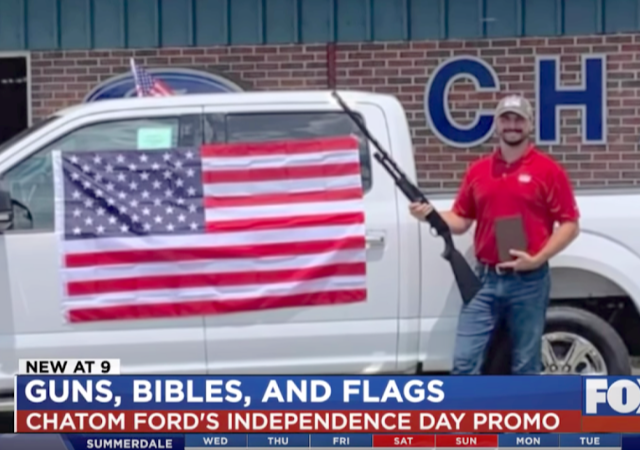 It excited me to see an Alabama dealership offering people a free shotgun, American flag, and a Bible with a purchase. I started packing to head to the state for a new car even though I’m devoted to Toyota.

The original promotion that Chatom Ford in Chatom, about an hour north of Mobile, offered customers was a free King James Bible, an American flag and a 12-gauge shotgun with the purchase of a vehicle.

The dealership originally partnered with a local Chatom dealer, Andrews Ace Hardware and Seed Store, and the Athletic Locker in Waynesboro, Mississippi, for the giveaway. When participants in the deal bought a vehicle, they were handed a gift certificate to redeem at either of the stores to get their firearm, after going through required background checks, depending on which state they live in (the Bible and flag were handled by the dealership).

“Obviously, we’re not just running around willy-nilly and giving everybody a shotgun,” said Koby Palmer, the dealership’s sales manager.

The video promoting the giveaway, which was posted June 19 and had been expected to run through July 31, has been deleted. It showed Palmer explaining the deal, then pumping a shotgun.

“Ford Motor Company wasn’t aware or involved in this promotion,” said Ford spokesman Mark Truby, who said the dealership had promised to “stop talking about it as God, guns and glory.”

I THOUGHT THIS WAS AMERICA!

Did anyone really think the dealership would hand out guns to people without following state and federal gun laws?

A new post on Facebook explained that since Ford “manufacture(s) the products we are franchised to sell” the dealership decided to comply with Ford’s request.

Now Chatom Ford has a deal called God and Glory.

But Palmer said the dealership had the right idea. Companies have promotions that appeal to its audience. Guess what Alabama is like. They love their guns, religion, and America:

Palmer said dealership managers came up with the original promotion while brainstorming ways to celebrate the Fourth of July in a way that reflected the community’s values.

The dealership received mostly positive feedback for the promotion:

One of those customers is Josh Lankford of Gulf Shores. He’d already contacted Palmer about what he was looking for when the promotion came up. Lankford said he saw the gifts with purchase as a nice bonus to his new pickup.

“It circles back to the great service and sales team that they have,” Lankford said.
“It’s great that they try to reflect the community’s values.”

I mean, come on, this Oklahoma girl got ready to abandon her Toyota love and buy a Ford from Chatom Ford.

How didn’t see this coming? The FORD foundation was taken over by left-wing radicals decades ago.

Yes, it was. The Ford FOUNDATION. Not the same thing as the Ford Motorcar Company.

IIRC the Ford Foundation holds the largest single block of stock in Ford Motor Company.
That probably means they do have a lot of say in how Ford Motor Company is run. The Foundation did look into how much could they liquidate and still keep control so that might have changed

Is giving away a gun rack ok?

And the customer can always refuse to accept the gifts… just saying.

Democrat party scion Joseph Kennedy was a Jew hating nazi symp. His son Teddy went on to manslaughter a girl and then collude with the KGB to thwart Reagan.

Hope that helps jog your memoryhole.

Joseph Kennedy also lobotomized one of his daughters because she liked to get frisky with the boys. Whoring around was OK for the Kennedy boys (JFK once pimped out his teenage intern in the White House swimming pool to a mega-donor while JFK watched) but the girls got a frontal-lobe-scrape for it. Nice bunch, those Kennedy’s. Really a family to admire and look up to.

Yes. And, he has been dead for 72 years, and, even the rabbi who lived up the street from us in 1965 bought a Ford. I asked him about it and he said it was time to move on.

betcha he was a reformed rabbi who preached Marx to his congregation every shabbos.

You bet me? What do I win? You are utterly and completely wrong. He was neither a “reformed rabbi”, more was he of the Reform sect.

Some historians think that Ford’s large cash infusion played a big role in Hitler achieving power. If not for Hitler importing Arabs, Michigan would not be facing being overrun by Muslims today.

Just remember, the bulk of Toyota Tundra and Toyota Tacoma models are made in the United States.

I used to build (machine castings and assemble)ball joints and tie rod ends for camrys and corrolas in brewer maine.

It tel’s me what not to buy.

” I started packing to head to the state for a new car even though I’m devoted to Toyota.”

You would’ve been sorry. Unfortunately, quality always seems to be “Job Never” at Ford.

Perhaps Ford’s senior management recognizes that the company would benefit from a better reputation for quality, but, the payoff for better quality might not come for a decade or more. And by then they’ll be gone anyway (and what’s the guidance for the next quarter?).

It always seems to be, “Umm, should we fix this problem or just let it fester?” but fixing it doesn’t seem to get much priority. Why do something about bad lug nuts on the F-150, it’s only Ford’s best selling product (and profitable, too) and, hey, maybe you can’t remove them but they look nice in the showroom:

I had this problem on all my vehicles. I wasn’t thinking about it at the time but when I take a lugnut off I usually put either grease or never-seize on the post to prevent rust. When I screw it back on the air in the lugnut is trapped and causes it to expand. I put too much grease on once and actually split the lugnut. Its the fake caps that are the problem; no pressure relief. I have same issue on my jeep compass and the Tahoe.

Unfortunately I managed to replicate the same problem because when I fix something it stays fixed.

I think Ford is right here. Their product is being tied to other products, for which they could be held legally liable.

Let´s say the gift coupon for a gun given by the dealer is used for a crime, then the Ford corporation could be sued by the victims, even though they had nothing to do with the promo.

Anyone can be sued for anything. The suit would lose.

The suit might lose, but the loser would not have to pay. The process is the punishment in this case.

It looks like a triggered a few snowflakes here. Of course anybody can sue for anything, and I´ll bet Ford doesn´t want to be sued for being involved in the use of non-Ford items, which is the reason why they don´t want their product being sold with other merchandise.

I´m a strong supporter of the 2A, but Ford´s reaction has nothing to do with the 2A.

By contract, the dealer is supposed to be selling Ford vehicles, nothing else. Tying the purchase of a vehicle to other products has an impact on the Ford brand.

Now please point to the doll and tell me where you got hurt.

I have a pretty active imagination. What would it look like if someone used a coupon to commit a crime.

Ford’s number 1 vehicle is the F-150. It is ranked number 3 in vehicles purchased by lesbians, with 2 Subarus ahead (Outback and Forester). With this virtue signaling, I still think a net loss of sales will occur.

Just numbers for lesbians. Definitely outnumbered by everyone else in the truck market. Still, what you wear and what you drive can be signals to others.

I’ve been wanting to buy a new Ford Edge, because it’s American. Their intolerant attitude is making me doubt myself.

notamemberofanyorganizedpolicital in reply to caseoftheblues. | June 27, 2019 at 8:47 pm

It begins to resemble what Richard Epstein called the right grounds for the civil rights act, namely discrimination in a monopoly market, whether by state rule or private violence.

Nice business you have here, it would be a shame if you served blacks. That’s private violence, and it’s ended by requiring serving blacks under penalty of law. (Rather than removing freedom of association in general, just do it in monopoly markets.)

It would be a neat turnabout if it could wind up protecting conservative thought against the left’s mobilization of corporations against them.

I would have trouble counting the number of Ford vehicles I have bought over the decades (Albigensian’s post notwithstanding I’ve not had problems with them). Next time I’m in the market for a new vehicle, this action by FoMoCo will cause some thinking about what brand I will buy.

I doubt Ford’s attorneys would fail to protect Ford from any sort of liability claim from ambulance chasers.

Give each customer a free car when thye buy a $35K shotgun.

The Left is always comparing driving cars on public roads with required license and insurance to Constitutionally mentioned firearms. Now here is the true equivalence…showing buying a car has no background check versus now having a FBI/BATFE check to buy a truck.

I bought my house from a Ford dealer. I have also bought cars from his son, and now I will be buying from his grandson. If the start selling Yugos I might consider buying from them because they always made good on legit gripes.

Let’s compromise. Give me the flag and gun, now. Give me the bible, later. And throw in a copy of The Constitution.

Just give them a certificate to the store for the price of one of their shotguns and the customer can decide whether to use it for the gun or something else.

Call it God, Glory, and Get’r done or something that codes for guns.

The Ford dealer couldn’t give them the firearm anyway. Could give them a coupon for one, or cash for one, but the buyer would still have to go to the local Federally Licensed Dealer and fill out the Form 4473, undergo the background check (or present a valid firearm carry license/permit if legal in AL) and then get the firearm.

I am fully aware of that.

However, I think they should continue the promotion but with a more generic certificate that gives the buyers a chance to buy the gun or something else with that money. I bet a bunch of them would still buy the guns.

Our family has had a Chevy or Ford pickup trunk in the family for as long as I can remember. Can’t buy a Grubernment Motors vehicle and now I have to add a Ford to the list. I guess a rice burning Toyota made in Texas is next up!

I’d try to switch brands. The dealership should tell Ford to p1ss up a rope.

Ford has no say so with what Dealership gives away with vehicle sold! Of course I wouldn’t drive a Ford or GM product to begin with…