“With 20 candidates making the stage, the DNC will hold debates on consecutive nights, with 10 contenders each night.” 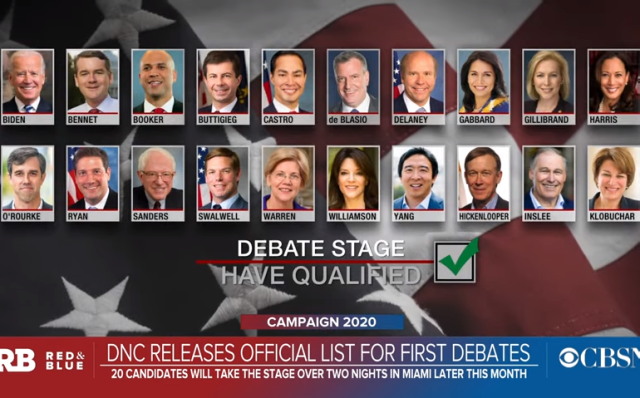 The Democratic National Committee has finally announced the twenty candidates will participate in the first primary debates at the end of this month.

It’s amazing that Bill de Blasio and Eric Swalwell made the cut. Real Clear Politics isn’t even tracking Swalwell’s campaign in its average of polls.

The Democratic National Committee on Thursday announced the 20 candidates who made the cut and will take the stage in two weeks for the first round of primary debates.

The debates will take place throughout two nights, with ten candidates per event.

With 20 candidates making the stage, the DNC will hold debates on consecutive nights, with 10 contenders each night.

Still left to be decided – the lineups for the two nights of debates.

Sources tell Fox News that NBC, the DNC’s media partner for the first round of debates, will make that announcement Friday afternoon, after holding a lottery-type event at Rockefeller Center in New York City. Each of the qualifying campaigns is allowed a representative.

Here’s a CBS News report. Ed O’Keefe raises a good point about how with so many candidates, lots of them won’t be able to do much more than introduce themselves and possibly answer a single question.

Paul Waldman of the Washington Post speculates that the debates will be “awful” and he makes a good case for his position:

The 2020 Democrats will debate soon. Here’s why it will be awful.

Sen. Kirsten Gillibrand (D-N.Y.), whose presidential campaign hasn’t been garnering as much support as many expected, has announced that she has satisfied one of the criteria for admission to the first round of primary debates to be held on June 26-27: receiving donations from at least 65,000 voters.

Which is certainly good for the senator, but it’s a reminder that these debates are going to be awful…

So why do I say these debates will be awful? Two reasons: Time and desperation.

Let’s start with time. The debates are scheduled to be two hours long. Out of that, let’s assume 30 minutes are taken up by introductions, commercial breaks and the time required for questions to be asked. Which would leave 90 minutes to be spread among 10 candidates, or nine minutes per candidate…

Which is just impossible. The candidates might have a chance to say a few worthwhile things, but it certainly won’t be enough to actually make a persuasive argument for why he or she should be the most powerful person on earth.

And that creates the second problem: Desperation. Former vice president Joe Biden or Sen. Bernie Sanders (I-Vt.) might not feel like the fate of their candidacies rests on that six or seven minutes, but someone such as Gillibrand or Rep. Tim Ryan (Ohio) could, because they are far behind in the polls and need to do something to change that. They will be under pressure to come up with some kind of zinger that makes such a clip of them stand out.

Personally, I can’t wait to watch this train wreck unfold in real time.

The last word goes to Jon Gabriel of Ricochet:

It’s going to be like a game-show with the contestants fighting it out to see who can promise to give away the most free shit.

I think the above image is a better visual representation of the debate stage.

Do they make Klown Kars that big?????

This debate means nothing without a third round of the winners from each first round matchup.

Ah, who am I kidding, real questions won’t be asked anyways…the contest will be to see who can promise to give away the most free crap and who can come up with the newest way to bash Trump.

“The 2019 ‘Woke’ Olympics.” May the most totalitarian and most skillful panderer-demagogue-apparatchik win!

Can we vote them off the Island via Toll-Free Number?

Ed O’Keefe raises a good point about how with so many candidates, lots of them won’t be able to do much more than introduce themselves and possibly answer a single question.

I suggest that the whole lot of them couldn’t answer a single tough question, one on one.

Still, others suggest that there should be more candidates participating in the Democrat Party Debates.

I saw one of your podcasts linked on Carpe Donktum’s youtube channel Mike.

Can they make it a cage match?

They should stack the candidates up like Hollywood squares.