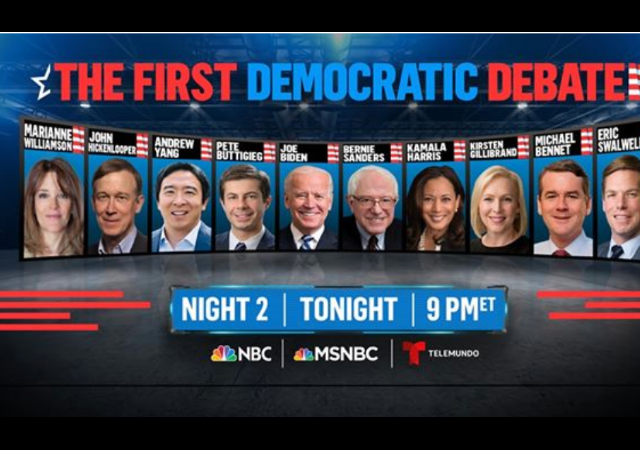 OK, so I hope tonight’s debate is not as chaotic and a mess so I can provide better coverage than last night. I wonder if they’ll try to out Spanish each other tonight.

Watch Marianne Williamson's closing statement and you can't tell me that this wasn't the most stupendously hilarious one of all time. #DemDebate #DemDebate2 pic.twitter.com/uWqyo7BlgW

Kamala Harris says she will give Congress 100 days, or take executive order to band import of rifles.

The vast majority of rifles are made in America. #DemDebate2

Kamala Harris would BAN importation of "assault weapons" without approval from Congress. #DemDebate2

Buttigieg: Some weapons have "no place" in America, ever. Which ones? And what distinguishes them from others?
Meanwhile, what does Biden do with non "smart guns"? the millions that already exist? Confiscate? #DemDebate2

I support your right to murder your unborn child more than that other person!

Americans do not support taxpayer-funded abortions.#DemDebate

WATCH: Harris says she doesn't think Biden is a racist, but she talks directly to Biden about his having worked with segregationists on the issue of school busing. #DemDebate2 pic.twitter.com/Ytb2xvOhux

All of the Democrat presidential candidates say that they will give illegal aliens free health care paid for by American taxpayers pic.twitter.com/19SlhhEr6x

All Democrats just raised their hands for giving millions of illegal aliens unlimited healthcare. How about taking care of American Citizens first!? That’s the end of that race!

Marianne Williamson cannot explain anything. Watch for yourself.

Democrat presidential candidate Marianne Williamson is all over the place in this clip, absolute lunacy pic.twitter.com/QNlT3WZJST

This is literally all Sanders is shouting about.

It's not how old you are, it's are you willing to take on corruption. #DemDebate2

Democrat Bernie Sanders comes out promoting his socialist agenda, dodges answering whether Americans will have to pay more in taxes under his administration

After being pressed again, Sanders admits Americans will have to pay more in taxes under his administration pic.twitter.com/t4AXjAD3og

94% of Americans would be better off with the #FreedomDividend. #DemDebate2 pic.twitter.com/v6xChd7m83

Yang: We're going to tax you and then give it right back in basic income.

Andrew Yang is basically explaining the Always Sunny in Philadelphia episode where they give out Paddy's Dollars when explaining how giving out $1,000 to every person each month would work to stimulate the economy. #DemDebate pic.twitter.com/lCnEI45XbG

Buttigieg doesn’t believe in free college for all, but some

A sliver of sanity. It’s like seeing a good commercial #DemDebate2

“I am proposing that we change the tax code so for every family that is making less than $100,000 a year, they will receive a tax credit they can collect up to $500 a month.” —@KamalaHarris #DemDebate2 pic.twitter.com/luwKM8bcWr

Biden says inequality has grown under Trump, but no.

Joe Biden says, “Trump has put us in a terrible position on income inequality”
Yeah, he’s only been president for 2 years. Inequality has grown for 8 years under Barack Obama. Has Joe Biden heard of Barack Obama?#DemDebate2

Details of the Debate

This debate has more stars, which could be why they had Sen. Elizabeth Warren (D-MA) last night. Don’t want to overshadow the media darling.

Oh who am I kidding? The candidates only have 60 seconds to answer a question and 30 seconds for rebuttal. We all know they only provide long-winded answers without actually providing an answer.

If I was one of the moderators I’d call on Bernie Panders. er…Sanders.

Keep showing Americans who really matters to you, Dims. Trump will win in a landslide of epic proportions.

Can a single entry clown car be a demolition derby?

They want no more Sanders nonsense. Or any other unapproved candidate

Did you notice how Racist the Democrat Party debate set up is?

They were afraid to have two “Black” people together on the same night on the same stage!

RE: “OK, so I hope tonight’s debate is not as chaotic and a mess so I can provide better coverage than last night.”

Theses “debates” remind me of those electric cars at the carnival where you TRY to bump into others and stop them from getting anywhere. Sort of like a Demolition Derby as noted above but with much more aimlessness and less damage.

They should just’ve held a free for all dodgeball fight or better yet a slap fight.

It’s entertaining. Some of what they say is valid. It’s just that they will screw it up.

Will they ever ask them about actual foreign policy, or Israel?

They think Israel is a problem for their beloved “Palestinians”.

notamemberofanyorganizedpolicital in reply to oldschooltwentysix. | June 28, 2019 at 9:00 am

Sanders has gone off the edge on the left even for Democrats. This time around it’s obvious that he has no plans, just the same soundbites from 4 years ago and in 4 years he still can’t answer followup questions.

Well now I think Harris has blown it. She couldn’t stay away from being strident for a whole debate.

And she took a big swing at Biden on racial / desegregation policy — and totally whiffed. That will hurt her in a long term way, because that was her signature issue.

Biden looked good standing up to her, showing his much greater class as a politician, but he’s still too old.

notamemberofanyorganizedpolicital in reply to artichoke. | June 28, 2019 at 9:02 am

Suddenly I think we need more health insurance. Why? Because I’m sick of all these rich candidates telling me how bad off they and their relatives are.

Kirsten’s latest insanity: Make a donation and get an entry in a drawing to have a whiskey with her:

I’d have to have more than a few stiff drinks before I could stand to have a whiskey with Gillibrainless.

notamemberofanyorganizedpolicital in reply to Dagwood. | June 28, 2019 at 9:03 am

Anyone taking bets on when she pulls a Madonna 2016?

The loser has to have two whiskeys with her…

They make wine in upstate NY, not to my knowledge whiskey.

What kind of statewide politician (senator!) will bypass the chance to use the product of her own state? What was she thinking, this is weird.

Need to update your knowledge. Glenrose Distillery, right up the road from me. One of many in NY that produce fine wines, spirits- and ciders. There’s lots of cideries up here.

Maybe she could raffle off the chance to perform her next abortion.

I appreciate the clarity. These Democrats are going to run on open borders, higher taxes, gun confiscation, undoing everything Trump has negotiated in FP, and universal health care. Oh, and more free stuff.

They’ve wanted most of that stuff for years, but they’ve NEVER run on it. Even Obama didn’t run on reforming health care in 2008 and he barely, and with trickery, rammed it through. Trump 2020.. 1984 style blowout.

I want to thank the press for a fair performance. They didn’t go easy on these people, and as a result they destroyed some front runners. Some think Warren was dethroned last night, I think Biden, Sanders and Harris were all damaged tonight.

Credit where credit is due. The press did not appear to protect the Dem candidates tonight.

If you go over to the Washington Post (or the NYT), you’ll see that they are absolutely convinced that Warren was stellar yesterday and that Harris “hit a homerun” tonight. It will be interesting to see how the polling looks next week in Iowa and NH.

Why don’t they just admit they ALL want America destroyed…they are happy to have it be an impoverished 3rd world nation with them of course ruling insulated from the crime poverty and disease and tossing breadcrumbs out the window of their limos as they quickly drive by on the way into their gated enclaves.

notamemberofanyorganizedpolicital in reply to caseoftheblues. | June 28, 2019 at 9:06 am

And just like all Democrats, they want to do it on our dime!