What topic gets more attention? Trump or social justice? 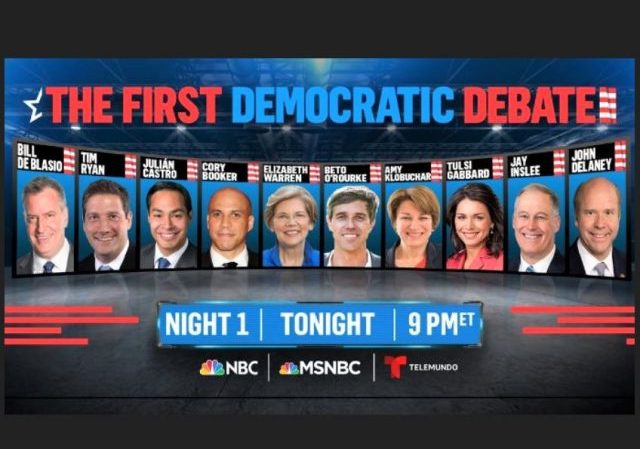 Ten of the 2020 Democratic presidential candidates will take the stage tonight for a debate while ten more will appear tomorrow.

It was everything we knew it would be: chaotic, loud, and an overall mess.

It looks like Mike was right. The media appointed Warren the winner of the debate and guess what. She was because it seemed like she always got a question. We hardly heard from Ryan, Gabbard, Inslee, and Delaney. We only heard a lot from de Blasio because he constantly interrupted.

But this is an easy debate to sum up: Everything for free and no plan to pay for it. Big corporations are evil. The 1% are awful, even though a lot of them belong to the 1%. Abortion shouldn’t have restrictions.

The best part? Everyone tried to out Spanish each other.

Booker look while Beto speaks Spanish is like uhhhhhhh pic.twitter.com/ON5z9mFt4l

WATCH: Booker responds in Spanish when asked what he would do with immigration on Day 1 as president. pic.twitter.com/OeShed2sz1

I don’t even know why the DNC has this debate. As Mike blogged, the media has already declared Warren the winner.

Just a reminder that New Yorkers don’t like de Blasio

None of them can answer gun questions for one reason

Elizabeth Warren given two chances to answer a question of whether the gov’t should be involved in removing guns already owned and avoids answering that both time. That’s a big problem for Democrats because there’s no easy answer to that part of their plans on guns. #DemDebate

Elizabeth Warren answered the gun question fairly well. Scant on specifics, just talk about “research,” an answer that paints her as a thoughtful candidate. She offered a political answer that won’t alienate everyone. #DemocraticDebate

See? Warren is Already the Winner

It’s clear who MSNBC wants to be president: Elizabeth Warren. They’re giving her more time than all the other candidates combined. They aren’t giving any time to Tulsi at all. -V (Tulsi’s sister)

Donald Trump’s Feelings on the Debate

Where was Democrats’ outrage then? #DemDebate

The Democrats love abortion! Here is a summary of their interactions:

I am wondering what reproductive justice is besides the death penalty for innocent babies.#DemDebate

“When you’ve got an economy that does great for those with money and isn’t doing great for everyone else, that is corruption pure and simple.” Sen. Elizabeth Warren, addresses concerns that her policies may negatively impact the U.S. economy. #DemDebate pic.twitter.com/SIAwniXmej

Elizabeth Warren is the winner?

We’re 19 minutes in and Warren has already had three questions.

Booker look while Beto speaks Spanish is like uhhhhhhh pic.twitter.com/ON5z9mFt4l

I see it’s the “little children’s table” tonight for the “debates.”

I wouldn’t hire any of them to even dog sit me for me. Just a bunch of pathetic clowns

Dang! I was hoping they would have Skateboard Francis and Kirsten the Barmaid on the same stage so the 1,000 watching could discover who is the most clueless.

I have to say, I am now entertained. A bunch of us on Twitter are using Google Translate to translate the following phrase in various languages…NO! I’m the coolest presidential candidate.

I needed to lose 10 pounds. Looking at that photo made me nauseous.

I blame the Russians for the technical difficulties.

If corporations are so evil, why are the broadcast rights to these debates limited to NBC, MSNBC and Telemundo?

Tulsi is the only interesting candidate. She is a true original.

NBC had her on something called “Big Idea” earlier in the week, probably showcasing the various Dem candidates. Hers? “Peace and Prosperity”. That will give Hope & Change a run for its money.

Tulsi is ahead at Drudge. Anyone who wants go over and vote for the only normal Democrat.

I tried to watch and only lasted a few minutes. So predictable, so infuriating, and yet so boring!

Clearly tilted towards Warren, even in the few minutes I watched.
For some reason Tulsi did stand out, but her response on Iran was a disappointing nothing-burger.

What I find fascinating is that no Democrat politicians are talking about homelessness! This is a huge issue on the west coast – it has replaced Trump as the main political topic among my liberal friends. Why are no candidates talking about it?

Two reasons – 1) nobody has an answer that doesn’t violate liberal conceptions of civil liberties. The only real solutions involve building lots of hostels and small psych hospitals, forcing those sleeping rough into hostels, and sectioning those who are mentally ill.
2) Homelessness is occurring in cities run by Democrats!! So any attention paid to the problem makes Democrats look like fools.

New Mexico’s budget this year was about 7 billion dollars. Their take last year from oil and gas revenues was close to 3 billion. Idiots like our Governor and Warren can’t seem to understand that if you kill oil and gas, there’s no replacing that revenue in a state with high poverty rates and a population just a little over 2 million.

Have you ever seen such a group of assclowns?
Oh right another group will be on tonight.