Charged with making criminal threats, possession of an illegal assault rifle, and manufacturing an assault rifle. 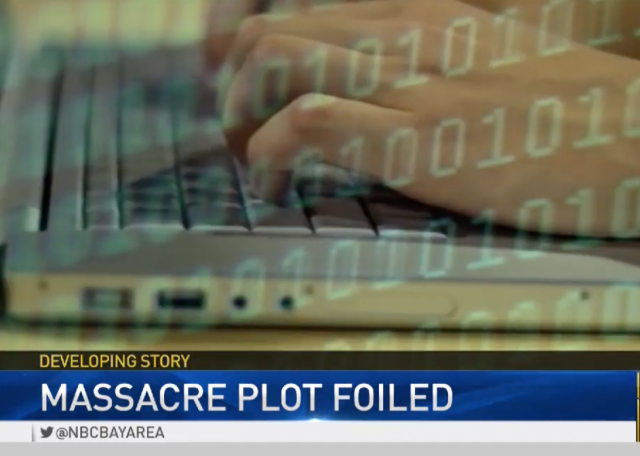 The FBI sent a cyber tip to Concord police concerning threatening comments made in online chatrooms. According to the San Francisco Gate, those threats, “consisted of threats against Jewish people, threats to commit a mass shooting at a synagogue and threats to shoot at law enforcement.”

In online chats, Farca allegedly claimed he would livestream his murder spree and referred to Jews as “subhuman.” JWeekly has more:

Ross Anthony Farca, 23, said in the chatroom on the video game platform Steam that he wanted to emulate the Poway synagogue shooter “except with a Nazi uniform on,” The Mercury News reported.

…He remains in custody at the Contra Costa County Jail in lieu of $125,000 bail, and pleaded not guilty at his arraignment hearing.

His screen name on Steam is “Adolf Hitler (((6 Million))).” He statements came to light via a cyber-tip to the FBI.

He said in his chats that he would livestream his massacre of Jews to the internet, and then murder as many police officers as he could before they killed or captured him.

“I would probably get a body count of like 30 kikes and then like five police officers because I would also decide to fight to the death,” Farca said in a post, The Mercury News reported citing court records. In other posts, he allegedly discussed picking a “better target than some random synagogue,” and referred to Jews as “subhumans.”

Doesn’t sound terribly dangerous. Tedious and unpleasant, certainly, but then, that’ll happen when you have a First Amendment.

As always, I’m skeptical of claims involving an “assault rifle”. So what else are they lying about?

sounds like someone who’s both mentally ill and desperate for attention for any reason. Well now he’s got the full attention of the justice system, congratulations, he got what he wanted.

A pathetic incompetent mentally ill creep desperate for attention. When has anyone like that ever killed a bunch of people? Except for Poway, Pgh, Charleston, Kansas City, Tuscon, Chicago, Indiana – – – –

A lot of these losers sound the same way.
Until they actually go and murder innocent people because they have nothing to lose, no life, no friends (just other losers they talk with on line) and no other way to gain the notoriety they are looking for.

I don’t care if he was manufacturing a zip gun or a Tavor, this creep needs to be taken off the street.

Forget about it, Jake. It’s California: “CONCORD, Calif. (BCN/KTVU) – A man arrested in Concord for allegedly plotting a mass shooting at a synagogue and killing police, and then posting the threats in an online gaming forum, has been released on bail.

Ross Farca, 23, of Concord, posted $125,000 bail over the weekend and was released from jail, the Bay Area News Group reported. He pleaded not guilty and faces a preliminary hearing on June 25.”

So, exactly what was accomplished here?

A man who reportedly was threatening to commit mass murder was charged with making threats and possessing a high capacity semi-automatic rifle and then released on bond. How does this eliminate the supposed danger, or even mitigate it? If the man was serious about dying while committing the mass murder, will the threat of incarceration be any kind of deterrent? Is he under 24 hour surveillence by LE, to prevent him from carrying out his threats?

I just do not see this incident as being very significant.

Farca appears well-qualified to run for Congress as a certified Dhimmi-crat Jew-hater, where he can join vile, goose-stepping Muslim bigots and Dhimmi-crat mascots, Tlaib and Omar.