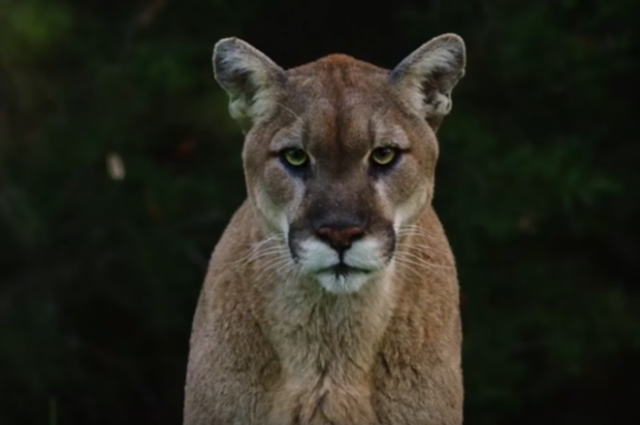 In a report discussing hunting that was written in 2015, I noted that  California had banned mountain lion hunting through a voter initiative in 1990, and as described in a book that tackles this topic (“The Beast in the Garden”), these big cats were gradually becoming habituated to humans.

The mountain lions have steadily been encroaching on the San Diego urban-area parks.  This Memorial Day, a young boy was attacked by a mountain lion while hiking with his family in a local preserve.

A mountain lion suspected of attacking a 4-year-old boy in San Diego was euthanized after the child was hospitalized with non-life-threatening injuries, authorities said Tuesday.

San Diego Fire-Rescue was called with a report of a mountain lion attack from Los Peñasquitos Canyon Preserve at about 2:30 p.m. on Monday.

The boy was with a group of 11 people during the attack. Everyone scattered, except for the boy’s father who “fended off the animal,” said California Department of Fish and Wildlife Lt. Scott Bringman on Tuesday.

“An 80 pound lion could really do some damage, and luckily the dad was there and fended off the animal,” he said.

Los Penasquitos Canyon Preserve isn’t a distant forested area: It is a 37,000-acre retreat in the heart of one of the most populated areas of San Diego.  Though the mountain lion killed has been identified as the one who attacked the child, many who have regularly enjoy the preserve have had a chilling reminder about how dangerous nature can be.

Witnesses said the boy’s father kicked the large cat — which was believed to be a mountain lion — and threw a rock to scare it away.

The boy was with a group of 11 people at the time, in an area known as Carson’s Crossing in the center of the preserve.

“Jumped out of the bushes — the grass was really high and attacked the kid,” said CDFW Lt. Scott Bringman . “Most of the group scattered and the dad stayed threw rocks and the animal left — which he did the right thing.”

“The lion appeared to have little fear of humans, which is abnormal behavior for a mountain lion,” the lieutenant said. “The wildlife officers immediately dispatched the animal to ensure public safety.”

There has been troubling developments related to the 1990 regulation, which may be a factor in today’s incident.

There are anywhere between 4000 and 6000 mountain lions in California. With the passage of Proposition 117 in 1990, mountain lions became a “specially protected species” in this state. This means that mountain lion hunting illegal and the California Department of Fish and Wildlife is prohibited from recommending a hunting season for the species.

Under the initial rules, mountain lions may be killed only:

1) If a depredation permit is issued to take a specific lion killing livestock or pets;
2) to preserve public safety; or
3) to protect listed bighorn sheep.

However, in 2018, green justice activists in Sacramento made it even harder to get a permit for the killing of livestock or pets.

Mountain lions that kill pets and livestock in Southern California will no longer be automatically targeted for death.

The state Department of Fish and Wildlife is changing the policy that granted ranchers and others automatic depredation permits for marauding cats. Now, the applicant must first try non-lethal methods to scare away or keep out the cougar, the Sacramento Bee reported Wednesday.

A permit would be issued only after two non-lethal attempts.

In fact, this past February, a California family’s decision to shoot and kill a mountain lion that routinely hunted its sheep over three consecutive nights stirred up a fiery local debate, with some arguing that killing the big cat wasn’t necessary.

…Quinton Martins, a big cat expert who runs the Living with Lions program, stressed the importance of educating landowners about the value of mountain lions and encouraging them to keep their properties secure during the cats’ prime hunting hours.

“There isn’t anybody who can give me a single good reason about how the killing of that cat does anything good,” Martins told The Press Democrat.

What is likely to happen next? There will be likely more many more sightings (such as the mountain lion that took a stroll through one of our local malls).   And Californians who fully understand the dangers posed by the big cats who also seemingly enjoy more legislative protections than they have will engage in independent deregulation.

“I think they’re bowing to political pressure, and it’s too bad,” said Vaughn-Perling’s husband, Wendell Phillips. “But the reality is nobody will bother to apply for permits any more. Shoot, shovel and shut up, that’s what coming.”

Well it’s a good thing that this father didn’t have a handgun with which to harm the Cougar.

Well first I tried talking to him, but he wouldn’t listen. Then I tried shooting near him but that didn’t work.

So can I just shoot him now?”

Yea, right. More like shoot the damned thing anyway and just bury it in the field.