“It looked like he had just taken a little nap for a moment, and then I put my hand on his shoulder and I said, ‘Jerry are you O.K.?’” – de Blasio 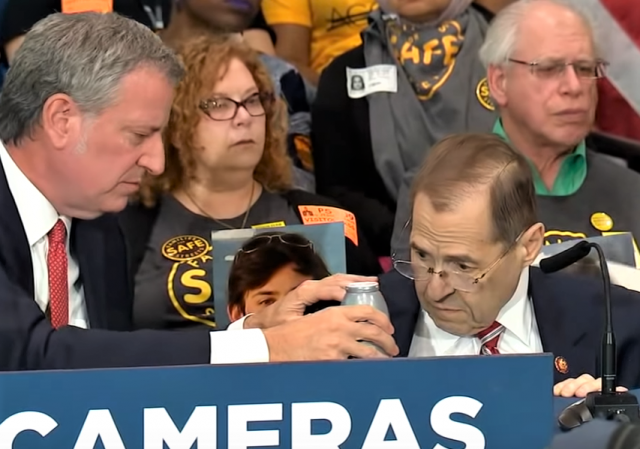 Rep. Jerry Nadler, Chairman of the House Judiciary Committee, man who has made Trump is #1 political enemy, fainted at a press conference Friday.

More from the NYT:

Representative Jerrold Nadler, the chairman of the House Judiciary Committee, was taken to a hospital after apparently fainting during a news conference on Friday in Manhattan.

Mr. Nadler, 71, was seated at a table in a gymnasium at Public School 199 on the Upper West Side, where Mayor Bill de Blasio was heralding the expansion of New York City’s speed camera program.

Thirty minutes after Mr. Nadler, a Democrat, made brief remarks, his head appeared to slump. A woman seated behind Mr. Nadler pointed at him, and then Mr. de Blasio attempted to revive Mr. Nadler as spectators became alarmed.

“It looked like he had just taken a little nap for a moment, and then I put my hand on his shoulder and I said, ‘Jerry are you O.K.?’” Mr. de Blasio said afterward.

Three doctors from NYC Health & Hospitals attended to Mr. Nadler, and Mr. de Blasio helped Mr. Nadler to drink some Gatorade from the mayor’s metal water bottle. A fan was turned on, and the gymnasium was cleared.

Appreciate everyone's concern. Was very warm in the room this morning, was obviously dehydrated and felt a bit ill. Glad to receive fluids and am feeling much better. Thank you for your thoughts.

He does not look good. The man should retire and look after his health.

He’s not just grossly overweight; he shows NO signs of taking care of himself. None.; Although I am not exactly Mr. America, I take at least the basis steps. I don’t think he does.

Totally disagree! This fat little dwarf needs to keep eating like a Tasmanian devil, swelling like a hot air balloon and passing out at every free buffet he can find. His nastiness will be non-existent as he’s gasping for air. Everyone recalls how Harry Reid got himself knocked down his basement steps, causing him to cool his jets. The same solution is available for Nasty Nadler.

Maybe he was fainting because he knew he got caught in one of those speed cameras.

While I don’t care about the cameras for my own actions, it is just another tax for the citizens who drive the streets. It’s a money grab. And how do you get to face your accuser when it’s a camera, which can fail, which can be off calibration, when it normally only tickets your vehicle, as it cannot identify the driver?

Isn’t it amazing that so many of these old leftists have fainting spells, episodes which you rarely see where they are incapacitated, like Hillary where she was dragged into the SUV, and all they need is some water? Seriously? I understand becoming dehydrated, but he was sitting on his fat rear end. Was he out drinking up a storm the night before? Of course there is never any health issues from the leftists, even though video evidence is plentiful that there are serious health concerns of these power mad leftists. Nancy who has appeared to have neurological issues while speaking, Hillary who can’t walk up and down stairs, who has unnatural head bobs with loud noises, and this sack of excrement who faints while sitting… yeah. These are the elites. These are the ones who rule over us.

Speed cameras sound like a bad idea purely in principle. Can you imagine all the times when speeding up may actually save your life?

Here where I live, they have a lot of these cameras. “My” drugstore is at one of the busiest intersections in town, and the cameras are more or less constantly taking pictures, judging from the number of times the strobe unit flashes.

I sat and watched for about 20 minutes one time, while waiting for a prescription to be filled. I saw those things going off SO many times, and yet I saw only one obvious violation, and one that was a “maybe”. The rest just seemed to be random.

Like everything else in New York, our great and purely benevolent lord, um, Governor Cuomo has a hand in this, as he’s claimed so many powers for himself the citizen-voters and the legislature have lost count.

Not content with the cash grab, he is installing facial recognition software in as many of the cameras and tolling devices as he can. Even when everyone knows the damn cameras are wrong a lot, he presses on with the taxpayers money.

Right now, the ticket and fine go to the owner of the car. Imagine once this big-brother system is up and running, every politician and his cousin will demand to see the tape so they can claim “it wasn’t me”; and the Gov will start compiling more photos for his private lists. “Well, Chicklet, who was that in the car with you when you went over the bridge the other day?” Could it have been Vladimir Putin?” Gonna have to see if anyone makes fashionable ski masks…. Bah!

Some Brits have the right idea on what to do about those cameras. Winnie Mandela would be proud; theu often use a tire with gasoline in them to “necklace” the cameras.

In Ohio, we got rid of those things. I don’t know how they ever got installed but our Supreme Court ruled them unconstitutional. Liberty FTW!

With the declassifying coming up he probably fainted when he realized what’s coming down the pike for him and his ilk.
I sure hope it’s all bad and there isn’t a club fed they get to go to instead of a normal federal prison.

Fat Boy: If you can’t take the heat, get out of the kitchen.

It’s gonna get a lot hotter.

He and Pelosi have either been hitting the bottle or are having some kind of health issues.

Time for these Dems to be replaced with Republicans – including Mayor De Blasio, who is ruining NYC. It’s starting to look like it did in the late 60’s and early 70’s, before New Yorkers FINALLY woke up and realized the Democrats can’t run a self-winding clock let alone a city larger than many countries! Once Rudy was elected Mayor, the streets got cleaned up, the city went through a renaissance, economically and physically.

Kick the Democrats OUT OF OFFICE, and replace them with solid Conservatives who will get the work done for the people!

Easier said than done Marie; in the land of free stuff provided by your local democrats the opposition needs to be more active. Wanna help?

Every elected Dem has countless ‘community service’ organizations with storefronts that help the illegals, tell people how to vote, send a turkey up to your apartment the day before thanksgiving, etc. etc. Folks who truly want these crooked folks out need to get out into the neighborhoods, help people, show ’em the way. Just with this post as an example- help fight their stupid tickets, tell them about the constitution, and maybe they’ll change their vote next time.

NY Repubs are busy fighting over the spoils of having 25% of the power, a sad spectacle. So much needs to be done, but very few people are even trying. Every week, more grassroots organizations spring up, join a few of ’em, help them out and let the people know there is hope.

There seems to be no Hillary-like mystery. These symptoms really do sound like dehydration. I hope he’s not suffering from some separate ailment that helped bring it on, but that is not necessarily the case.

Well, after his bariatric surgery, his little remnant of a stomach doesn’t hold that much any more. The water was probably all he needed.
As a lifelong government employee, we paid for his operation too! Obviously getting his suits made over was his responsibility and he didn’t get any money for that, can’t you tell LOL!

He’s reprising the role of the fainting (or was she feinting?) girl during Obama’s “Healthcare” propagandapalooza.

The belt he wears around his chest cut off circulation to his tiny little heart.

A bizarre political party. Leadership pushing 80. Yet it thinks its propaganda outlets will lock up the millennial vote.

They have a Speaker who is embracing Soviet era tactics (The Soviets used to put dissidents in mental institutions). Now this heavy lightweight shows how sclerotic the party his.

Given his reputation, he probably just fainted from hunger. Feed him a baby or two and he’ll be fine.

The traitor is preparing his “long-term disease, unfit for trial” tactics. NoName style.

I think he had a stroke, and as much as I loathe him, I’m humane enough to have sympathy. I hope he recovers.

Can’t agree with you. What Nadler is trying to to is seditionist.

While Fat Boy may drop dead on stage (pelosi and clinton, please take note), his malignant replacement is in the wings (with no BBQ sauce.)

Can’t have much compassion for his repacement, either.

Sedition is sedition. If they don’t like our founding and our way of life, let them emmigrate to their Cuba and Venezeula paradises.

Meantime, if the Trump curse takes out Mr. Corpulent, might as well enjoy the show.

Unfortunately he appears to have recovered.

Especially when having to deal with virtue signalers, KK.

Viz: Please inform your Royal Weship that this peasant isn’t.

On the other hand, maybe he just needed a nap…