“The official border patrol position is: ‘It’s private property, the owner can do what he wants.'” 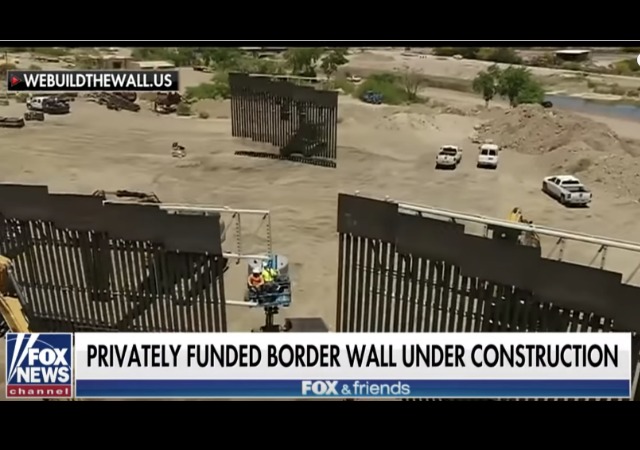 The private organization We Build the Wall began construction on a border wall in El Paso over the weekend. The group has raised over $20 million on GoFundMe.

Former Kansas Secretary of State Kris Kobach told Fox & Friends the group aimed to build the wall near Mount Cristo Rey to fill a “ridiculously large gap” in that section. He claimed that “drug and human smugglers have been taking advantage of it.”

Air Force veteran Brian Kolfage started the GoFundMe account with the intention of sending the money to the federal government, but decided not to do that after “the group soon learned it would not be able to dictate exactly how the government allocated the money.”

That is when they decided to build the wall themselves.

“This is the first time any private organization has built border wall on private land,” Kobach told Pete Hegseth, adding that the Army Corps of Engineers had said previously that the strip of land was too rugged for fencing.

Koback [sic] said the project was funded through private donations to the organization.

“We’ll keep on building as long as people keep chipping in. The average contribution has been only $67 but so many people have chipped in,” he said.

Kobach said plans are in the works to start a second project.

The construction began after an order from US District Judge Haywood Gilliam “prevents work from beginning on two of the highest-priority, Pentagon-funded wall projects — one spanning 46 miles in New Mexico and another covering 5 miles in Yuma, Ariz.”

The group will place the wall on private land owned by American Eagle Brick Company. From ABC-7:

Kobach told ABC-7 the group plans to build the barrier up the mountain, along private property. The plan is to build a platform on the mountain where Border Patrol agents can park and monitor the border along the newly-installed barrier. “(The barrier) climbs over 300 vertical feet, over this half mile. And in so doing, we not only stopped the human smuggling down at the bottom in the flat area, we also stopped drug smuggling.”

In an interview with Fox & Friends on Monday, Kobach said “This is the first time any private organization has built a portion of the wall on private land. It’s happening right here in the El Paso area, and it’s not just any piece of land. This piece of land is right where the El Paso wall — that separates El Paso and Ciudad Juarez — where that wall ends there’s been a half-mile gap between the existing wall and Mt. Cristo Rey.”

Yahoo News reports former White House strategist Steve Bannon is now the director of We Build The Wall. “We had to catch them by surprise,” Bannon told Yahoo News, predicting residents are “gonna freak out” when they see what was erected over the past two days.

Kobach explained that the border control has no problem with the construction, especially since it is on private property. He also said the wall makes a great gift for the agents:

Koback [sic] said the border barrier is a perfect Memorial Day gift. “I think this is a fitting present to the United Sates and to the people of El Paso because this is protecting our security,” he said, “It’s the same thing indirectly that those soldiers died for: American security or another country’s security.”

Kobach said the barrier will have a paved road running side-by-side so Border Patrol agents can drive next to it. He said Border Patrol agents are in favor of a privately-funded barrier. “The official border patrol position is: ‘It’s private property, the owner can do what he wants.'”

Gee, I wonder when some of our trolls will apologize for calling it a fraud? Ragsy? Ragsy?

What ever happened to Rags? I haven’t been here every day but I notice he is not posting.

Presuming that he has any feelings, perhaps they got hurt by countering his tripe with good replies?

Nice of you to report the story. Too bad you didn’t see fit to give credit to the folks that actually broke this story – Jim Hoft over at Gateway Pundit. http://thegatewaypundit.com

Which is where Fox got the story. They at least gave him credit.

To use a baseball analogy; Jim Hoft is also known for his towering foul-tips landing in the parking lot – after bouncing off car hoods and breaking a few windshields.

But credit should be paid.

Seems to me that there has been some careful thinking and strategery is project selection in order to get the most bang for the buck.

“The official border patrol position is: ‘It’s private property, the owner can do what he wants.’”

I don’t see any plans to actually patrol it. A road Border Patrol agents can use does not in practice establish an obligation to conduct such patrols.

Without some sort of official law-enforcement patrol, a wall is too easily defeated. Some ne’er-do-well can walk up with a power tool, cut a hole, and allow a flood through, and nobody except officialdom can do anything about it, private property notwithstanding. In Texas, maybe, but these are in Arizona and New Mexico, both of which leave ordinary Americans as helpless as, say, Massachusetts.

My understanding is that the bollards are filled with rebar and concrete.

Also, that the B.P. is picking up illegal aliens in that area, so they are already patrolling there.

And of course I donated a small amount a couple of times, and will continue to do so.

Apparently, the mayor ordered them to stop