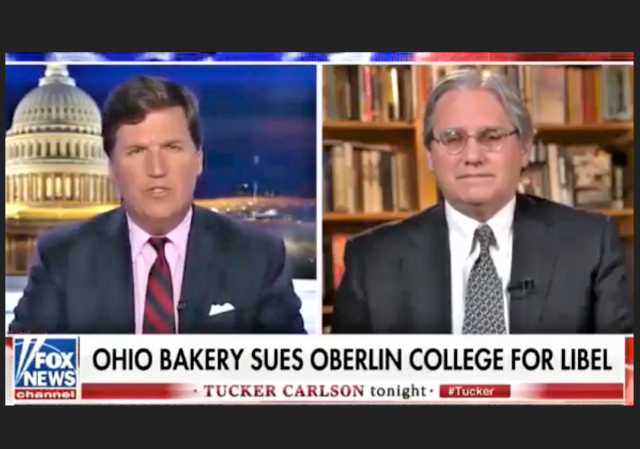 There has been near complete silence by national media regarding Gibson’s Bakery v. Oberlin College, which we have covered since the initial protests through the current ongoing trial.

The case is proceeding under the national media radar no more, as Tucker Carlson covered the case tonight. I was a guest on the program to discuss the implications of the case.

Here is the segment, starting with an excellent intro reporting by Trace Gallagher:

“This case is significant because businesses and people on the receiving end of social justice warfare mobs rarely are able to fight back,” said Cornell Law School professor William A. Jacobson, whose Legal Insurrection blog has covered the case closely….

“One big issue in the trial is whether the college encouraged or participated in promoting the attacks on the bakery such that the college is legally responsible for the actions of its students, faculty and staff,” Mr. Jacobson said. “If the college is held responsible, that would set a precedent that a college cannot encourage social justice warfare, yet disclaim the damage done to innocent bystanders.”

Oberlin has argued its students, faculty and staff are protected by the First Amendment. Claims to the contrary “conflict with the obligations of higher education to protect freedom of speech on college campuses,” said Oberlin in a Monday statement.

“Colleges cannot be held liable for the independent actions of students,” said the statement. “Employers are not legally responsible for employees who express personal views on personal time. The law is clear on these issues.” …

Victor Ortiz, an Oberlin city police officer who testified at the trial Thursday, said the protest crowd of about 200 had a “mob mentality.”

“It was a mob mentality out there,” said Officer Ortiz, as reported by Legal Insurrection’s Daniel McGraw. “People were getting flyers shoved in their faces saying Gibson’s were racist, curse words were chanted, and they chanted how this business was racist, too.” …

Oberlin denied the defamation allegations. “Neither Oberlin nor Dean Raimondo defamed a local business or its owners,” said the Monday statement….

The defamation trial, expected to continue for about a month, could also resonate with other companies — including media outlets and tech firms — that have been accused of smearing conservatives and others in the name of pushing a political agenda….

“We have seen this spillover effect in many other areas, such as social media and big tech, where the former campus social justice warriors are in control of the means of communication, or are able to bully those in control,” said Mr. Jacobson. “The social justice warfare that takes place on campuses now impacts society at large.”

We will continue with our daily trial coverage, and of course, the verdict.

NOTE: Our trial coverage is a project of the Legal Insurrection Foundation. Your support helps make this type of coverage possible.

I am hoping to see damages so high that Oberlin can no longer afford any social injustice crap.

I’d like to see damages so high that Oberlin College is shut down because of this, pour encourager les autres.

I am shocked that parents would pay $70,000 a year for a child to attend Oberlin.

But then I am shocked that private liberal arts colleges and the majority of so-called Catholic colleges and universities are still in business.

Prof. Jacobson, your doggedness in keeping the spotlight on Oberlin College and its beyond-the-pale behavior towards this bakery for over 2 years now is doing the Lord’s work. (Goes along with your relentless pursuit of the truth about Sen. Liz “Pocahontas” Warren and her fake American Indian identify. You were on her story long before most others were. She jumped the shark with her DNA test, which was fun to read about.)

notamemberofanyorganizedpolicital in reply to Mark Michael. | May 14, 2019 at 7:38 pm

God put some in the Belly of the Beast for a reason……..

Where will Prof. Jacobson strike again??

Bravo for staying on this story better than anyone else and that it’s getting more attention.

Good Job on the interview!

I got lucky and turned on the TV just a couple minutes before you came on. A pleasant surprise.

Keep up the good work, Prof.
I hope Tucker has you on again!

Excellent segment. A national tv shout out to Legal Insurrection too. These Social Justice cases need to be exposed for what they are, I hope to see you back with Tucker again.

Oh, maaaaaaan! The one time I miss watching Tucker. ????‍♀️
Well done, Professor. I’m grateful you are on our side, and continue to do this work.
I know this segment will bring in more readers; and, hopefully, more to the legal coverage fund.

The case Finally made it to prime-time. Congrats professor.

I hope the Gibson Bakery lawyers have Oberlin staff e-mails showing the administration were actively supporting the rioters.

PS. I forgot to include Oberlin text messages.

Thanks for covering. I wouldn’t know about this trial otherwise.

I really hope to see monumental punitive damages in both this case and in the smirking boy’s cases against MSM. It would be a huge message to the industry that there will be consequences for this horrible behavior.

One correction: nothing is a worse example of identity politics than today’s Democratic Party.

its been famous for their music, but otherwise they are nothing more than a bunch of off key snowflake-ologists who think they’re the best thing since sliced (not stolen) bread

Draw your own conclusions.

Me: Honey, those make up people are magicians.

Well, Professor, I see you are using Trey Gowdy’s barber.