Putting more pressure on the UK to extradite Assange 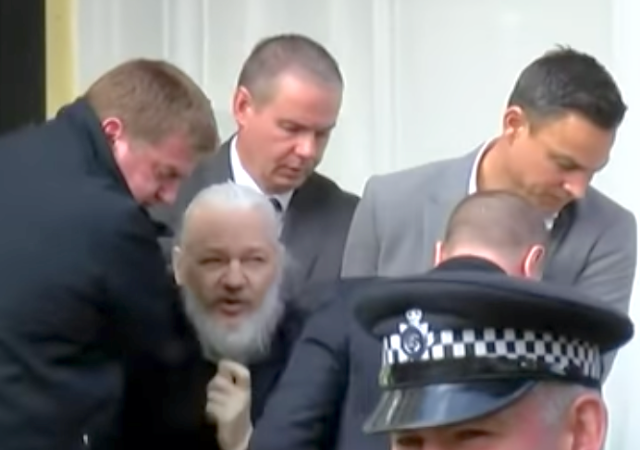 Thursday, Wikileaks founder Julian Assange was indicted on 17 counts of violating the Espionage Act by publishing classified information obtained from Chelsea Manning (whose 35-year sentence was commuted by President Obama).

Julian Assange, the WikiLeaks leader, has been indicted on 17 new counts of violating the Espionage Act for his role in obtaining and publishing classified military and diplomatic documents in 2010, the Justice Department announced on Thursday — a novel case that raises profound First Amendment issues.

The new charges were part of an expanded indictment obtained by the Trump administration that significantly raised the stakes of the legal case against Mr. Assange, who is already fighting extradition proceedings in London based on an earlier hacking-related count brought by federal prosecutors in Northern Virginia.

The secret documents that Mr. Assange published were provided by the former Army intelligence analyst Chelsea Manning, who was convicted at a court-martial trial in 2013 of leaking the records. The indictment accuses Mr. Assange of complicity in Ms. Manning’s leaks, saying he solicited unauthorized disclosures of classified information and encouraged her over several months.

Justice Department officials sought to minimize the constitutional implications of the new indictment. They noted in a briefing with reporters that most of the new charges against Mr. Assange were related to his obtaining of the archives of documents, as opposed to their publication.

The three charges that squarely addressed Mr. Assange’s publication of government secrets were focused on a handful of files that contained the names of people who had provided information to the United States in dangerous places like the Afghanistan and Iraq war zones, and authoritarian states like China, Iran, and Syria.

But the officials would not engage with questions about how the actions they said were felonies by Mr. Assange differed from ordinary investigative journalism. Notably, The New York Times, among many other news organizations, obtained precisely the same archives of documents from WikiLeaks, without authorization from the government.

Information was from Bradley Manning, not Chelsea Manning,
Much like Bruce Jenner, not Caitlyn Jenner, won the decathlon.
Just saying,

Not a trivial distinction. Thank you.

Imagine trying to fit those initials on a ring?

My question is, by naming the source as Chelsea Manning as opposed to Bradley, does that make this a faulty instrument? I would think that as Chelsea did not exist at that time, the transfer of data as stated couldn’t have happened.

Does bradley still even have an instrument, or did he get that cut off?

Today’s Los Angeles Times was hyperventilating over the possibility that Trump might pardon a “war criminal”–an American officer who’d shot some civilians in Afghanistan; and might recommend leniency for a Navy SEAL who hadn’t even been convicted yet. The horror of it all!

I didn’t hear those bozos letting out even a peep when Obama commuted Bradley Manning’s sentence.

Why read the Los Angeles Times? Don’t you wish you had those moments of your life back?

There’s a lot of tap-dancing, but ultimately the former congressmen in current cabinet positions (Coats, Pompeo) that have been after Assange for a decade, through the Dept. of Justice, will have to present a case beyond a reasonable doubt. The passive writing is annoying (“assisted in his leaks”), but if they prove Assange was an active participant in the theft of US secrets, then I can accept the US having jurisdiction. Simple reception and publication shouldn’t matter. He’s not a citizen or resident and has no responsibility to sovereign America… unless he actively spied on it. We’ll see how the case unfolds.

Btw, what’s your authority on that?

He knew what he was receiving and publishing. Just as newspapers knew when receiving Presidential Communications with foreign leader it is sectet.

And if he was publishing the secrets of Australia’s Prime Minister there would not be the slightest doubt Australian law applies to him.

Perhaps. WRT the US material much depends on whether he can make a case that he’s a publisher of the material. If yes, and he did not participate in Bradley Manning’s theft of the material, the SCOTUS Pentagon Papers decision applies. OTOH, Australia likely doesn’t have any such high court decision which would let him out.

Of course if he will only plead that he’s a Socialist-Democrat and didn’t intend to violate the law – well, then he’s home free, just like The Hildabeast – No?

According to the DOJ, Assange is not a ‘traditional’ journalist so he’s not covered by the 1st Amendment. And all this time I naively believed that the 1st Amendment protected an activity rather than a special class of people.

As gun-control laws assert that no right is unlimited in and can be regulated, does this mean the government will set standards for journalists and will require licensing standards be met before anyone can publish? After all, most people don’t really need to own a newspaper or radio station.

This is a red herring every bit as much as journalists calling every self-defense case “stand your ground” and every semi-automatic long-barreled weapon an “assault rifle”. He doesn’t need the 1st Amendment if America has no jurisdiction over him. The entire case will hinge on proving Assange stuck his nose into the American tent, making American law apply to him where it normally would not, no matter how badly the publication of documents hurts America.

in a related matter, the White House has ordered the documents used to get the FISA warrants against the Trump campaign and the President elect and President Trump, to be declassified .Liberal heads are starting to swell now. I would not be surprised by tomorrow rhea runs, there will be a hue from a very anger mob. This is breaking now on Fox News.

I heard a legal expert talking about this on the radio. He said that Assange will get off. If he stands his ground and discovery of secret information is blocked, he will not be able to get a fair trial.

Agreed. As an aside, there is far too much “secret information” and “classified information”, much of of it restricted merely for CYA purposes. It should be declared a felony offense against the American people to knowingly classify or withhold public documents for an improper purpose.

While NYTimes Co v. US will probably get Assange off the hook, I still think that Eunch-in-drag-with-fake-tits Manning should’ve been shot.

Bradley Manning was a solider in inform, betraying US secrets. Sure he should have been shot. While standing in front of obama.

Very, very conflicted on this.

Assange is doing the work of what the Fourth Estates is supposed to do. If not for him and Edward Snowden, much of the corruption of our now-diseased government would remain secret.

Maybe they’ll cut him a deal for his testmimony.

Or maybe this is a way of getting him to dump all he knows onto the Internet, and expose everyone but Trump.

Hope the latter is true.