Jewish Teens Help Save Man With Swastika Tattoo, Have No Regrets

Jewish Teens Help Save Man With Swastika Tattoo, Have No Regrets

“A good deed is a good deed and that’s part of life. We should be helping everybody out” 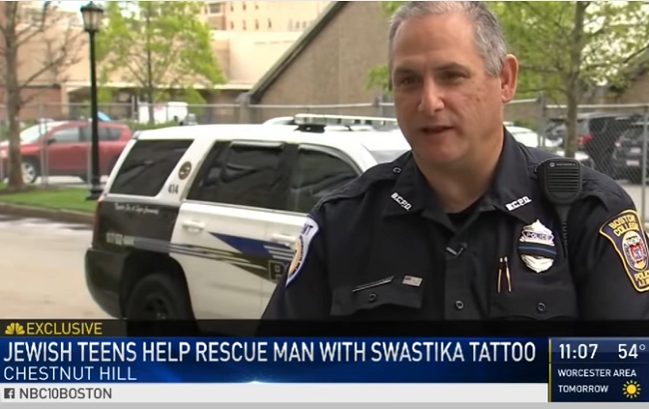 Four Massachusetts teens alerted police to a body they saw in the Chestnut Hill Reservoir, and their quick action helped save the man’s life. In an interesting twist, the four young men are Jewish, and the police officer who dragged the man out of the water noticed a swastika tattoo on his hand.

The Jewish teens have no regrets and are happy to have helped save the man’s life.

It was late at night and a group of Jewish teenagers were on a walk around the Chestnut Hill Reservoir in Massachusetts.

“As I approached them, two of them ran up to my car,” said the patrolman. “There was a body in the water.”

Mascioli ran down the embankment and found a man partially submerged and not moving.”

While I was pulling him out of the water, I also observed that he had a swastika on his hand,” said Mascioli.

It turned out the man the Jewish boys helped save had a tattoo of the Nazi symbol, and Mascioli told them about it.

. . . . The students, who study at a Yeshiva high school in Brighton, were not permitted to speak with NBC10 Boston about the incident, but they had a message for the officer to share with the man they helped rescue.

“They wanted just to let him know that it was four young Jewish boys that helped save his life,” recalled Mascioli, who said the students had no regrets about helping a man with an anti-Semitic tattoo. “A good deed is a good deed and that’s part of life. We should be helping everybody out.”

It’s unknown how the man ended up in the water. But police say he didn’t have much time left, and if it hadn’t been for the teenagers, the patrolman likely wouldn’t have seen him.

An added note for those who might be interested pertains to Love and Brotherhood. Link: http://www.jewfaq.org/brother.htm (It’s my understanding that the site, Judaism 101 represents an Orthodox viewpoint and is reliable in what it contains.)