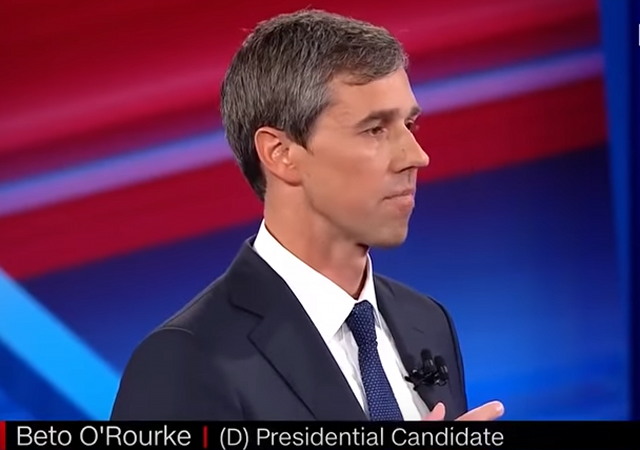 Just a few months ago, people were saying Beto O’Rourke might be the “white Obama.” Now he is watching his support and momentum collapse. If the ratings for his CNN town hall event this week are any indication of his future, it might be time for him to call it a day.

Presidential candidate Beto O’Rourke is not only starting to appear toward the bottom in the polls, but his Tuesday televised town hall with CNN now holds the distinction of being one of the lowest in ratings for the network.

Beto’s town hall attracted fewer viewers than the same CNN event for John Hickenlooper, if you can believe it.

Beto O’Rourke’s CNN town hall Tuesday night did not attract the ratings his campaign hoped for. According to Deadline, O’Rourke attracted an average of 714,000 viewers and a news demographic (25-54 year-olds) of 194,000 viewers.

One stat that stood out, and will make Beto’s team sweat is that his total viewership of 714,000 fell short of Colorado Governor John Hickenlooper’s, whose town hall was back in March and attracted 754,000 viewers.

Beto did his best to say all the things the left wants to hear. Via Twitchy:

Beto: Scientists are saying “we have ten years within which to act, to free this country from a dependence on fossil fuels and fully embrace renewable energy, to make sure…this planet is habitable for the generations that follow us.”#CNNTownHall pic.twitter.com/NGmbAA6CJN

In the end, it didn’t matter:

Warren, Booker, Klobuchar, even Hickenlooper had higher ratings than O’Rourke on CNN… https://t.co/LT5BVt7Dkw

Remember when some pundits said Beto actually won by losing the Texas Senate seat as it put him on the national stage?

Incredible. Just a couple months ago, Beto was the shiniest object in the room, polling as high as 12% nationally. There’s a strong likelihood he won’t even make it to the Iowa caucus. https://t.co/E72pzbKOaw

When Beto was running against Ted Cruz, he was useful to Democrats and the media. Now he’s just one of over 20 Democrats running for 2020 and the novelty is all but gone.

Guess we can rename him BETOast.

He is truly the emptiest of all the empty suits currently running for president. He is a preening impostor, playing the role of a serious policy formulator.
I have never heard him say anything remotely resembling a coherent policy position.
His “platform” consists entirely of vacuous pronouncements, delivered with mock earnestness, apparently intended for an audience of gullible drones lacking critical thinking skills.
It was almost enough to get elected in Texas, a state I admire greatly.
Let that sink in for a while.

Believe me, it sunk in with me last year as I walked through my Austin neighborhood and saw all the Beto signs. The media treated him as a rock-star, and progs from coast & coast feted him like royalty. But they didn’t really know shit about him, nor did they care. They just wanted to “turn Texas blue.” And Ted lacks so much in likability that it damn near worked. What kind of mindset does it take to pour so much into such a weak candidate that you don’t even care about or know about?

Isn’t it sad that likability is more important to some people than principles and competence. Ted might not score off the charts on the charm meter, but super smart and principled matters way more to me (and from the cheap seats up here in Indiana, but I still sent him some cash).

Amazing that he came close to winning in Texas. The only thing this guy has is the name Beto and that he speaks Spanish. He’s a straight dumber Mayor Pete.

So long as they keep producing phony candidates promoting phony narratives supported by phony polling while insulting voters who increasingly see through it, this communist takeover will fail. They tried their rigged election and their soft coup. The worst is yet to come.

Whether by election or by coup, socialism inevitably leads to state-sponsored violence. They sell their cancer promising wealth distribution. Once people wake up and see that is about poverty and misery distribution, it is too late. They have already surrendered their freedoms to the government. Good job.

I think you’re all wrong. Beto clearly has the best chance of beating Trump. This is known.
He simply will need more money to buy ads. Lots and lots of money. If only Hollywood types had the courage to support him.

Heh, I see what you’re doing! Are you really an engineer?

You seem devious enough to be a lawyer, and I mean that as a compliment! And yes, Hollywood needs to get behind Beto! Moar money, moar and moar!

Maybe if he names deBlasio as his running mate?

He could try wearing a chicken costume, it’ll look great with the flapping arms.

Or, wear a chicken costume and twirl one of those arrow sign things pointing to the entry of his next town hall or community meeting. Right up there with the Going Out of Business sign twirlers.

Obama was an empty suit. And I’m not certain that Obama was really all that smart.

Beto is also an empty suit–but he’s got a feature. He’s also got an empty head.

Obama was a cunning traitor who did a lot more damage than realized.

Is Obama really cunning, or a talking head for others who are?

Obama was exactly as smart as the people who wrote the content for his telepromter.

Would a straight jacket be able to restrain Beto’s thrashing arms?

Beto spent over $20 per vote in his Home state of Texas. To match Hillary’s losing total would cost close to $1.5 Billion.

The fork was in when he announced, there were just some that didn’t know it.

Stick a fork in Beano and all the other Demonicratic candidates. They are done.

Won’t this quickly boil down to Biden, Sanders and Harris with Spartacus and Warren possibly hanging around longer than most?

The hopeless are easy to identify – Gillebrand, Moulton, DiBlasio, Swalwell, Klobuchar, Gabbard and many more I can’t even name.

The quick flashes are fading – first Beta then Buttigieg

So that will leave 3-5 to battle it out.

I believe that when Beta released his tax returns that was the beginning of the end. The fact that he and his extraordinarily wealthy wife gave practically 0 to charity year after year was an eye opener. He then compounded it by defending their lack of generosity by implying that his mere presence in “public service” was a gift to us all worth far more than cash.

I don’t think O’Rourke will drop out before Iowa. If nothing else, he is auditioning for a job in a future Democrat administration. Quit too early, and he could get lost in the shuffle. Besides: he has a rich family that will bankroll his campaign for as long as he needs it.

The VP slot is probably out of reach, but head of ICE is a possibility. These days Texas Democrats have only one issue they care about – importing enough Latin American illegals to flip Texas blue – and having an open borders anti-law enforcement head at ICE could open the floodgates. Border states such as New Mexico and the People’s Democratic Republic of California are already well on their way to becoming mini North Koreas, and Arizona won’t hold out much longer. That leaves Texas as the last big border state prize.

He’ll be seriously considered for the VP slot. “Can he deliver Texas?” they’ll wonder.

VP candidates who are chosen in order to deliver a particular state rarely manage to do so, particularly in Texas. If Sanders or Biden is at the top of the ticket, then having another white man as VP would cause the Democrats’ genocidal base to become even more unhinged (if that is even possible).

In 1960, when Texas was much friendlier for Democrats, JFK and his VP Landslide Lyndon Johnson won by an unimpressive margin of about 40,000 votes (out of about 2.5 million cast) against the hapless Nixon campaign. In 1988 Dukakis had a popular sitting Texas Democrat Senator Lloyd Bentsen as his VP and still got his clock cleaned.

The only hope Democrat’s have in Texas is to flood the state with illegals, and for that they don’t need O’Rourke on the ticket.

Cruz barely beat beato in Texas. I think this has more to do with Cruz than the commie, but pretending the D doesn’t have a chance in Texas when beato lost by 200K votes in an 8 million vote race is to find yourself shocked one day.

If you want to know why I think O’Rourke has peaked in Texas politics, look up the name “Bob Krueger”. Like O’Rourke, Krueger was an empty-headed Democrat non-entity who in 1978 came much closer to unseating Republican incumbent Senator John Tower than O’Rourke did.

After Tower retired in 1984 the MSM/DNC axis all but anointed Krueger the next Senator from Texas. But Krueger lost the Democrat primary, finishing third to a candidate who later got blasted by Phil Gramm in the general election by 18%.

Krueger finally made it to the US Senate when he was appointed to fill Lloyd Bentsen’s seat in 1993. However, he was crushed by the Republican Kay Bailey Hutchinson by a 2-1 margin in the 1993 special election.

Like Krueger, O’Rourke benefitted by vastly outspending Cruz. To make matters worse, Cruz apparently never took his opponent seriously. I did not see one single Cruz TV ad (compared to wall-to-wall O’Rourke ads), not a single bumper sticker, and of the few Cruz yard signs I did see most were not printed by the campaign but by a political action committee worried that Cruz was trying to mail it in rather than campaign. On several occasions I contacted the Cruz campaign asking for a yard sign and never heard back from them. That spoke volumes about how unserious they were – in all my years of political involvement I never had any campaign fail to give me a yard sign when asked.

The sad truth is that America just isn’t ready for a Furry president.

Beto is an incompetent moron. God made him the dumbest man ever created then hit him on the head with a hammer a few times to make sure.

The time to stick a fork in it was before he announced,what a maroon.