Hindu Nationalists expected to get around 350 out of 542 seats 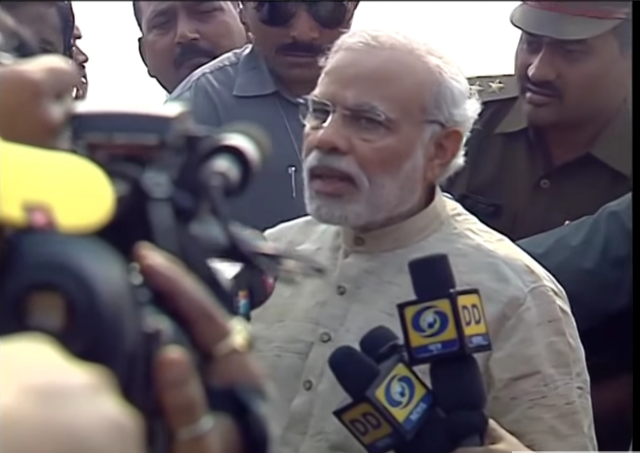 It looks like the Modi-led Bharatiya Janata Party (BJP) and allies will receive around 350 out of 542 seats, well over the 272 majority mark.

India’s grand-old socialist Congress party, which ruled the country for 54 of its 67 years since independence, may pick up around 80 seats, slightly better than its worst ever showing in the 2014 elections. The electoral landscape has mostly wiped out India’s other left-wing and Communist parties, traditionally strong in the eastern and southern states.

Prime Minister Narendra Modi looks set for a second term with another sweep, with the National Democratic Alliance that his party the BJP leads ahead in 346 seats as votes are counted for the Lok Sabha elections. The opposition bloc led by the Congress may not touch three figures if current trends continue. Leads are now in for all 542 Parliament seats in which elections were held.

The national election was primarily a battle between the NDA led by the BJP’s Narendra Modi, and the United Progressive Alliance UPA led by Congress president, Rahul Gandhi, who was, however, not the alliance’s declared prime ministerial face. (…) The elections, held over seven phases, in 542 constituencies, witnessed the highest ever turnout in Indian history at 67.1% beating the previous record of 66.4% in the 2014 polls.

Modi’s reelection came as a shock to the mainstream media, which have long shown criticism of his supposed “anti-Muslim” agenda.

“India’s minorities fear return of Modi,” CNN claimed. The BBC parroted the sentiment, reporting: “India’s Muslims fear for their future under Narendra Modi.” The UK broadcaster added that with “an increase in hate crimes against Muslims in India in recent years, some fear the world’s largest democracy is becoming dangerously intolerant under the Hindu nationalist Bharatiya Janata Party (BJP).”

The New York Times lamented India’s “Rightward Turn,” adding that “Modi, has governed as a right-wing populist whose nationalist message has often pitted Hindus against Muslims.”

“A Modi Victory Puts India’s 200 Million Muslims in Danger,” the headline in the U.S. weekly The Nation said. “The Hindu nationalist party ran a hate-filled campaign and now seems poised to return to power with a terrifying mandate.”

Prime Minister Netanyahu was one of the first world leaders to congratulate Modi on his reelection. In July 2017, Modi became the first Indian head of government to visit Israel.

Congratulations, my friend @Narendramodi, on your impressive election victory! The election results further reaffirm your leadership of the world’s largest democracy. Together we will continue to strengthen the great friendship between India & Israel.
Well done, my friend! ???????????????????? https://t.co/2U5yJmHddS

Modi’s election victory is part of a worldwide trend towards nationalism. India’s election result also shows a resounding rejection of the Socialist policies pursued by the Congress and other left-wing coalitions. These Soviet-inspired economic planning turned the country into one of the poorest in the world. Only after the free-market reforms of the 1990s, introduced following the collapse of the Communist bloc, did the economy score high growth rates for the first time since independence.

India’s reelected leader has his work cut out. The country still suffers from rampant poverty and underemployment. The socialist-era bureaucracy still stifles entrepreneurship and innovation. Modi’s resounding victory, however, shows widespread support for his policies and trust in his abilities to deliver on promises of economic prosperity and stability.

He has a good head for economics, but lets not pretend it’s all sunshine. His “anti-Muslim” stance stems as much from them being not-Hindu as any specific threat, and he often turns a blind eye to mobs persecuting Christians as well.

Muslims have a long and murderous history in India, even after they got their own state carved out of India. They have worked hard to earn the enmity of Hindus.

That persecution of Christians is the one thing that concerns me. Christians are the most persecuted group around the world, but the MSM mostly don’t seem to care – indeed references to them are conspicuously absent from the linked articles.

Come on! As the mouthpieces and propagandists for the swamp/left/islamic axis, this is their goal!

Modi’s reelection came as a shock to the mainstream media, which have long shown criticism……..

Halcyon Daze in reply to notamemberofanyorganizedpolicital. | May 23, 2019 at 2:45 pm

Countries that don’t want to be conquered by Islam have no choice but to turn right. The left has sold out to Islam. The fascism of both ideologies made for an irresistible match made in hell.

Hindu’s and Muslims have hated each other forever in India, hence Pakistan

As reported on BBC this morning, a province that is home to 43 million Muslims went 100% to Modi and his party. Muslim led, leaning or supporting candidates took zero seats. This election appears to be about the economy and not religion. Modi’s party never took sides along religious lines no matter how hard the Leftist media in India and abroad tried to label them all radical Hindu extremists.
.
Again, this could be a bad sign for the Democrats and Leftists here in the U.S. come November 2020. The electorate is not as stupid as the Dems and media would have us believe.

The meaning of the word “populist” as used by the media has changed, or perhaps it is the populace that has changed.

The word “populist” dates back to the time when literacy was the mark of wealth and social status. Now, whole populations are literate, and most have access to computers. We have the potential of having a well-informed electorate.

That may be why we became “ungovernable.”

note: the MSM NEVER worry about how non Muslims are treated in Muslim majority lands…

followers of Muhammad riot any time you make fun of them –
but we are supposed to grin and bear it.

screw them and the camel they rode in on!

Modi is a business man and a Conservative. He came in very much like Trump, questioning everything the government does. The media has hated him and during the election as the BBC was reporting extensively, was labeling him a Right Wing extremist to try to cover his amazing accomplishments within the Indian economy – massive job creation both formal and informal, 7% average growth, international powerhouse for trade, etc.
.
BBC interviews with reporters on the scene this morning could not find any explanation for the massive unprecedented victory. He got almost 60% of the vote that included several candidates including a Gandhi. His party won more than 60% of the House seats as well. None of the polls predicted any of this.
.
Sound familiar???
.
Conservatives had huge victories in Australia (the polls blew it there too). Conservatives in EU countries are making headways too, as Liberal governments are running their economies into recession while economies in Conservative led countries are excelling.
.
The question is, when will the media begin to realize that they are on the wrong team? Or at least admit that they should not be choosing sides and start committing journalism.

The New York Times lamented India’s “Rightward Turn,” adding that “Modi, has governed as a right-wing populist whose nationalist message has often pitted Hindus against Muslims.”

Putin’s propaganda arm hasn’t changed in 80 or more years. Maybe the HoR’s should look into collusion between Putin and the ny slimeballs.