“Most objections aren’t with Ousamequin, but the arm and sword overhead.” 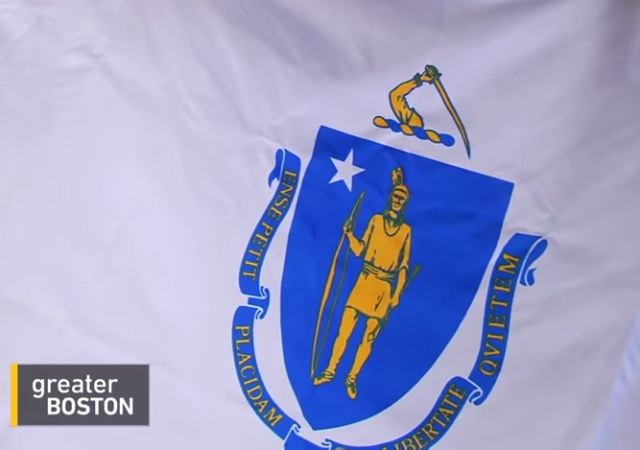 Officials in Cambridge, MA, which is known for its progressive politics, have removed the Massachusetts state flag from city hall. The flag features an image of the Native American leader Massasoit (aka Ousamequin) with the arm of Myles Standish holding a sword at the top.

As the 400th anniversary of the Mayflower’s landing approaches next year, there is a growing push to change the Massachusetts state flag because of its depiction of a Native American.

At least 30 municipalities have endorsed a state bill to remove and replace the state’s flag and motto. Cambridge, the fifth largest city in the state, went even further — earlier this month city council members labeled it “offensive” and approved a proposal to remove the state flag from council chambers.

“I found out that there is a lot of imagery on the state flag that I didn’t actually know existed,” said Massachusetts State Rep. Nika Elugardo, who is co-sponsoring the state resolution to replace the flag.

The flag features a Native American holding a bow and arrow. Just overhead is a disembodied arm with a sword. Surrounding the seal is the phrase “Ense petit placidam sub libertate quietem,” which roughly translates from Latin to, “By the sword we seek peace, but peace only under liberty.”…

Most objections aren’t with Ousamequin, but the arm and sword overhead. They are said to belong to Myles Standish, an English military officer who helped establish and secure the Plymouth colony.

The local news program “Greater Boston” did a recent report on this which you can watch below. You’ll be astounded to learn that they somehow managed to tie this effort to the Trump presidency.

Once again, the people who claimed three years ago that they only wanted to remove Confederate symbols, are using the same argument to go after entirely unrelated symbols.

The Mass. Flag Honors The Oppression Of Native Americans. It’s Time To Change It

When confronted with a public question, we traditionalists instinctively consult history for solutions that have stood the test of time. But savvy people don’t blindly defend every historical hand-me-down, no matter the reverence it commands. The father of modern conservatism, English statesman-philosopher Edmund Burke, understood that any tradition deserving of conserving must adapt to changing mores…

It would be hypocritical to argue, as I have, that southern states should mothball Confederate flags and monuments, while ignoring our own history. We would be aghast at honorific flags and monuments to the Third Reich. Nazism’s neighbor in hell, racism — whether honoring slaveholders and Confederate traitors or a Plymouth Colony forerunner of our genocidal treatment of Native Americans — is similarly indefensible in a memorial.

Do you ever get the sense that some people on the left feel powerless in some areas and are compensating by exerting control in other areas?

I do not understand the basis for the objection. The sword? The Single star? The motto? The Algonquin Indian?
The original design dates from the Revolutionary War. Massachusetts regiments used during the Civil War.
So why the fuss?

You notice that they never ask for a vote on this stuff. They just tear it down.

Isn’t it obvious? Myles Standish is a WHITE MALE! It’s the arm of a WHITE MALE with a SWORD (oppression).

Here’s the thing… I do not object to a group of people being nutty. Just don’t force your crap on the rest of us…

The 13 colonies FREAKING HATED EACH OTHER…. why the hell do we think we need to so united?

The founders recognized this and were pretty smart about it. Elected officials should get back to recognizing the want and need for locales to govern themselves.

geeze I wish there were an edit button for correcting grammar.

Up next: A ceremony to dedicate the raising of a new flag representing The People’s Republic of Cambridge.

i have a good idea for the SJWs – leave the USA.
after all we were born from taking over Native Lands.

go back to the Old World and Africa – LOL.

The problems with going back to the “old” country include looking like everyone else and not having all the goodies of being a protected class because of it.

There is only the Party and the Now. Again… Orwell was an optimist.

Cambridge removes ‘offensive’ Massachusetts. There fixed for you.

More leftist BS projection. Here is the description of the Mass state flag from Wikipedia:

“The flag of the Commonwealth of Massachusetts displays, on both sides, the state coat of arms centered on a white field. The shield depicts an Algonquian Native American with bow and arrow; the arrow is pointed downward, signifying peace. The arm itself is of Myles Standish[1] and signifies the philosophy that one would rather lose their right arm than live under tyranny. A white star with five points appears next to the figure’s head, signifying Massachusetts’ admission as the sixth U.S. state. A blue ribbon surrounds the shield, bearing the state motto Ense Petit Placidam, Sub Libertate Quietem (“By the Sword We Seek Peace, But Peace Only Under Liberty”).[2] Above the shield is the state military crest: the bent arm holding a broadsword aloft. The sword has its blade up, to remind that it was through the American Revolution that liberty was won.[3]

The state flag was officially adopted in 1908, but had been used unofficially since the American Revolutionary War as the ensign of the Massachusetts State Navy. In 1971, the earlier pine tree was replaced by the current design.[4]”

The state flag was adopted in 1908, but the coat of arms was adopted in 1780, at the height of the Revolutionary War. The arm and sword have traditionally been claimed to be representative of the struggle for liberty from England. The Algonquin Indian is supposed to represent the contribution made to the region by native Americans [the name of the state is derived from the Massachusetts tribe] and the desire for peace between the colonists and native tribes. There is nothing inflammatory about the flag.

They do the same kind of thing on 4Chan. A group of people gets together and decides to troll, oh, just pick a target.

One of the latest pranks was to see if they could stampede people into calling the “ok” gesture racist. It worked.

The people on 4Chan are fairly young and highly skilled. They have probably encountered this kind of indoctrination, and turned it into a game — for the lulz, as they say.

Is the Cambridge City Council in a state of rebellion. The Commonwealth of Massachusetts Constitution allows the governor to put down a rebellion by force… Aahh… we can dream.

But scrolling through it, I read this: Massachusetts Constitution Pt. 1 ART. XVII. The people have a right to keep and to bear arms for the common defence.  And as, in time of peace, armies are dangerous to liberty, they ought not to be maintained without the consent of the legislature;  and the military power shall always be held in an exact subordination to the civil authority, and be governed by it. It’s very very clear in their Constitution that the people have the right to bear arms. Not as members of the militia, but the people. Yet, Massachusetts judges have continually upheld some of the strictest gun control laws in the nation- which by their Constitutional, are clearly unconstitutional. This has never been amended nor altered.

If WW2 took place now, the world would be run by Hitler.

The pussifictication of our culture by the left (with the GOP’s help has hollowed-out our abiltiy to draw warriors for battle.

If China has the patience, they can wait us out, then take over the world. What are we going to do when we need a second wave of soldiers? Draft the likes of jussie mollett and bradley manning?

First off, those wanting the flag torn down and replaced should be required to pay reparations – with interest – for their forebears shoddy and illegal treatment of the peaceful Indians who inhabited the area long before them.
Also those who want that symbol torn down should also return to whichever old country their forebears are from as it’s obvious the “native” Indians were so badly abused and deserve to be free of such remembrance.
And finally, if that old country won’t take them, it should be required of them to prove their lineage in that country back to the onset of mankind. Failing that, I could see a tax on all ads on liberal msm news programs to start a liberal colony in Siberia if we pay Putin enough to give them a couple acres land for their new settlement.