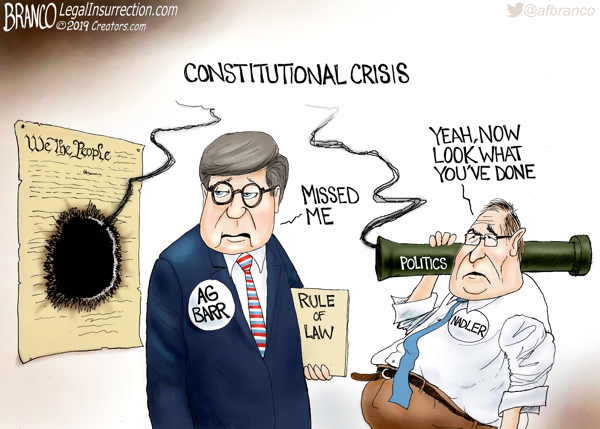 What gets me is that I hear on talk radio that the Democrats changed the law so that Grand Jury testimony couldn’t be seen by Congress after the Starr report.

Doesn’t it seem logical that Nadler would have voted for that change and is now holding Barr in contempt for honoring the law?

I believe he did a great deal more than merely vote for it.

Not true. You can see the entire history of Rule 6 here, and you can easily see that what you heard on some radio show is garbage.

I think in this one Nadler should have said, “I wasn’t aiming at you.”

I don’t know, I think blaming the victim is a pretty standard MO for Socialist-Democrats.

This is a great cartoon, because it is right on target..

The terrible thing is that I don’t believe that big black hole can ever be fixed… so even though this is funny, it is also really, really sad…

I suppose that is the point..TY Mr. Branco.

I don’t believe the damage is permanent as long as we use this 6-year window of opportunity given to us by Trump to fix it. If not, then the Dems will proceed to eviserate the Constitution permanently.

The sad thing is that this is really how the other side sees it. When Trump was elected, one of my neighbors thought the most appropriate response was to put up a poster of the constitution on the building’s front door. Of course I had no objection; I thought it was about time people started paying attention to the d*mn thing, especially after eight years of 0bama treating it as obsolete. But they really think it was preserved until 2016 and is now under attack, with Trumpitler blowing holes in it.

Of course they thought the same during the W administration. Who remembers when the fake news outlet Capitol Hill Blue ran a story alleging that W had called the constitution “just a g*dd*mned piece of paper”. CHB later exploded into little tiny pieces when it became clear that for years all its exclusive stories had been invented, which is why nobody else had them first.