Anyone else sick of people blaming this mysterious “white male privilege” for their troubles? 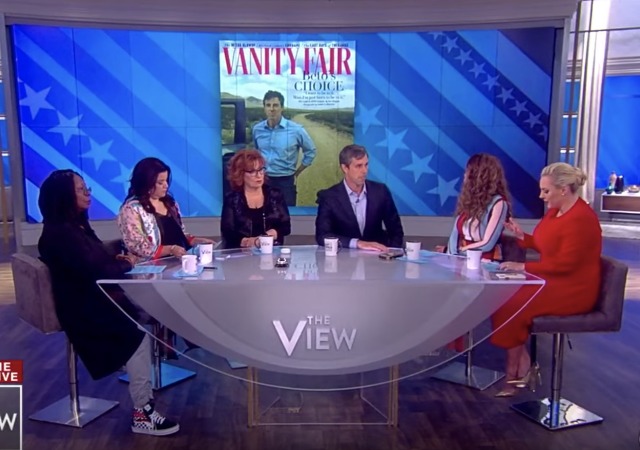 Oh for the love of everything in this world. Democratic 2020 presidential candidate Robert O’Rourke put his tail between his legs and became a beta male on the set of The View as a way to relaunch his campaign.

How? Just that horrible white male guilt that every white male has to feel because feelings. Instead of giving credit to hard work for where he is now, he “acknowledged that his background and position of white male privilege has helped him advance in his career.”

White. Male. Privilege. Is anyone else sick of white males having to apologize for their race and sex?

Give me a break. He expects this to relaunch his campaign? Because we all want a sad little man as the leader of this country.

Hate President Donald Trump all you want, but he does not take crap from anyone nor does he apologize, especially for his race and sex.

Leftist co-host Joy Behar asked O’Rourke if his Vanity Fair cover came off as “elitist,” even though I’m pretty sure President Barack Obama had his face plastered all over magazines in 2008 and 2012.

For some reason, O’Rourke agreed as he cowered before the women. From The New York Times:

In the Vanity Fair profile, which appeared on the eve of his campaign announcement in March, Mr. O’Rourke made his ambition clear. “I want to be in it,” he told the magazine. “Man, I’m just born to be in it, and want to do everything I humanly can for this country at this moment.”

On Tuesday, Mr. O’Rourke sought to qualify that comment. “I have my work cut out for me to be a better person and ensure that I’m more mindful to the experiences that others have had,” he said. “I was attempting to say that I felt that my calling was in public service. No one is born to be president of the United States of America, least of all me.”

Co-host Meghan McCain mentioned one of O’Rourke’s gaffes, which infuriated me. He said that after he lost his Senate bid he traveled across the country alone and only “sometimes” helped raise his children with his wife.

Okay, yes, it was a joke, but McCain noted “that a female candidate wouldn’t be able to get away with.” She asked him if he can get away with a lot more because he is male.

Here’s the thing. O’Rourke did not get away with that stupid comment. People on the left and right threw criticism at him for saying that. Did O’Rourke point that out? No, he whined about that mysterious privilege he and other white males enjoy.

Behar brought up the criticisms, which led O’Rourke to admit that he “deserved it” and explained he meant to show “that his wife had the ‘lion’s share of the responsibility during this campaign.'”

Something tells me this will not help O’Rourke “relaunch” his campaign. I do not know about you, but I do not want a spineless male or female to lead this country.

They won’t be happy till all men are castrated

Regardless of race, one needs an IQ above 110, Beto doesn’t make the grade.

Does Beta expect to apologize his way to the presidency? Seems like that’s all he’s been doing lately. Perhaps he should also add self-flagellation to his repertoire and live stream it of course.

Oh by the way, that cover was fake and pretentious, not elitist.

Keep it up, Beta!

His best feature….road trips for self-discovery. As a friend of mine once opined: he should discover himself out of here.

Hate President Donald Trump all you want, but he does not take crap from anyone nor does he apologize, especially for his race and sex.

That’s always been his most obvious virtue. He has others, but that’s the one nobody could possibly miss.

I consider it an essential character trait for anyone chasing after the job of President of the US.

White male privilege in the 21st century is easy to define. You have absolutely nobody but yourself to blame for mistakes, failures, and shortcomings.

That doesn’t bother me. But being blamed for the mistakes, failures, and shortcomings of everybody else is really starting to chap my hide.

How come no one asks this perpetual penitent to drop out of the race and refund all campaign money?

According to the Dallas Morning News, Robert Francis O’Rourke gave .3% of his income to persons less privileged than himself in 2017.

Maybe he should apologize for hypocrisy rather than being born white?

I refer to myself as being plagued by eptitude. If something breaks, I have to fix it, because I can.

I even fixed the cat.

I once safety wired my cat’s tail to his body.

And safety pins. Especially after I had to walk around ankle deep in a Sailor’s blood and the hatch he was cleaning came crashing down and crushed his grape.

Always make sure the safety pins are installed correctly.

I really liked that cat. He made me laugh. Like the time I’m entertaining guests and out of the corner of my I see the cat sitting there looking at them. And his tail goes up and starts swishing back and forth. So I’m thinking, “Something is about to happen, and whatever it is it’s going go be funny.”

My guests are sitting on an L-shaped sofa on one end. My cat is on the other end. And he starts tearing along the back of a sofa like a NASCAR spring car on the high bank at Daytona.

And my guests see this, scream, and dive onto the floor.

My cat gets to the other end of the sofa and starts licking himself, pleased as punch with himself.

Animals seem to have a knack for naming themselves. That cat was called killer. I used to have miniature pinscher named Lolla. My current dog is Romeo.

If anyone tries to rent you or loan you a horse named Widow Maker or Satan run away.

Tell bob the fake Mexican to wake me up when he gives away his wife’s family fortune to the poor.
Until then I’m going to try and get some glamor shots of me on a skateboard so all the lunatic left will think I’m cool.

Beto is a fop.

To be fair, Beto has the privilege of wealth he didn’t earn and a daddy who got him out of at least one problem (the one we know about) that an average American would not have weaseled out of.

None of these privileges have to do with his race or his biological sex.

We don’t know that his daddy got him out of anything, or even that he could have done so. It’s possible, but there’s no evidence for it.

It’s much like the claim that GWHB used his influence to get GWB into the TX Air National Guard. There’s no evidence that he had any influence in the first place, let alone that he used it, and no reason to believe either of these things, but they remain possible.

When your enemy is in process of destroying himself, don’t stand in his way. Heh.

Of course, Napoleon didn’t actually say that. I keep getting corrected on that point. And I’m like, “Do you think I’m stupid? Of course he didn’t use those words. Because the little Corsican was speaking French and I’m speaking English.”

Can you imagine this complete wimp as President of the United States? Any foreign leader would eat him alive.

If you thought Obama did nothing but apologize for America, could you even imagine the self-flagellation coming from a President Beta? He’d make sure we were on the s**t end of the stick in every trade deal and agreement/accord. Because America.

I went to a feminist forum and this is the first thing I found.

“1. I Have the Privilege of (Generally) Having a Positive Relationship with the Police.”

Have these gender grievance studies people ever been out of the country?

Do you see these Japanese police riot officers?

OK, the pic ancient. From my time in the Navy. So I’m wondering, these guys, Japanese riot police, would beat me with their batons six ways from Sunday with a smile on their faces. And they have the kendo skilzz to do it.

Somebody is going to have to explain my racism to me because I’m not getting it.