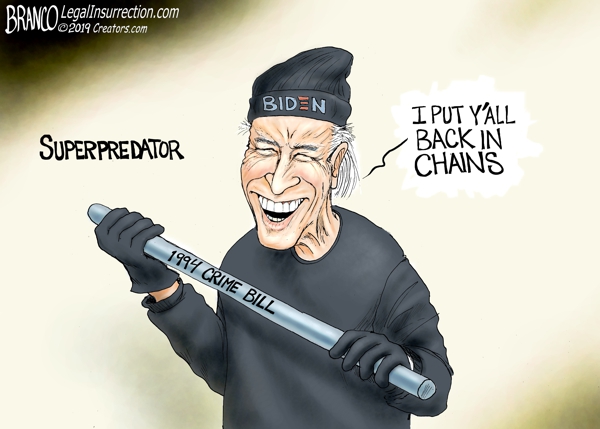 Oh come on now. One Presidential tweet and suddenly you are trolling for more? This is a good one and would be worthy though, so someone retwteet it to the PResident. 🙂

I knew this was going to go to your head. (But I guess you deserve it, so good job…)

The Truth hurts, don’t it?!

Brilliant! Hope the POTUS Tweets this cartoon up the MSM’s you know what.

I’m not a Biden or Clinton supporter but the truth is that long term incarceration for serious offenders is a reason why the crime rates dropped.
The economy, usually blamed for rising crime, has gone through several cycles since but the rates continued to go down. Yes, there are other factors driving this too.
Some of the provisions like punishing crack possession and sales much worse than regular cocaine dealing should be addressed.
As someone like Willie Sutton could have said, why lock up the repeat criminals, because that’s where the crime is.

Yes, but the Dem base hates it, so keep reminding them of it. Make him live by his own (new) rules.

The crazy thought trains people are on these days are enough to cause a migraine headache.

People now act as if those drug dealers like Alice Johnson had not been sent away a long time and kept off the streets they would have stopped pursuing easy money and committing their crimes on their own initiative and would be astronauts or brain surgeons by now. To the contrary, they would likely have been more accomplished and more lethal criminals by now just like the drug dealers and other participants in organized crime that have not been caught and sent to prison.

The feds did research and determined that typically a few major criminals and gangs are responsible for most of the crime in a small segment of a city or in the entirety of a town. They therefore decided to focus more on identifying the major criminals in troubled communities and pursuing them patiently with a taskforce. Taking them off the streets yielded results.

The reason that the rates for serious crimes have been in a downward trend is that the a lot of states and the feds enhanced sentences, reduced eligibility for parole, and kept major criminals off the street. It is hard to say just how often the govts. take killers, rapists, major thieves, and perpetrators of other crimes off the street because they catch them and incarcerate them for something else. The success with taking DNA samples from those incarcerated and then used in criminal investigations provides some insight into this effect. No one should be surprised to see the crime rates go back up when criminals are subject to catch and release. Minority neighborhoods will he affected the worst and the injury and death rates for the people in them will increase. Nonetheless, the proponents of releasing the jailbirds will grandstand and pretend that they are doing minorities a favor and it appears a lot of them are willing to believe a favor is being done by having uneducated, unskilled criminals with no work ethic, experience or desire to work an honest job being sent back to their communities. It should be apparent that those people did not go to jail because they were intent on making a living based on their skills in an earnest and straighforward occupation.

The really bad thing for freedom loving people is that the marxist party will use the increasing crime as a justification for infringing freedoms of honest people through gun control and other nonsense that does not work as well as aggressive prosecution and incarceration.

It is safer to release prisoners for white collar offenses and develop a registration system complete with photos and fingerprints and reporting to inform the public and try to prevent them from running scams again.

This is of course utterly unfair to Biden, which is exactly why it’s so fair on a meta level. I love the reference to his outrageous claim that Republicans want to put black people back in chains. He never paid the price he should have for that; now make him eat it. And make him fall over himself to apologize for what may be the one good thing he ever did.