Venezuela in Chaos, US Supporting Opposition

Venezuela in Chaos, US Supporting Opposition

According to Secretary Pompeo, Maduro was preparing to flee to Cuba until the Russians persuaded him to stay put. 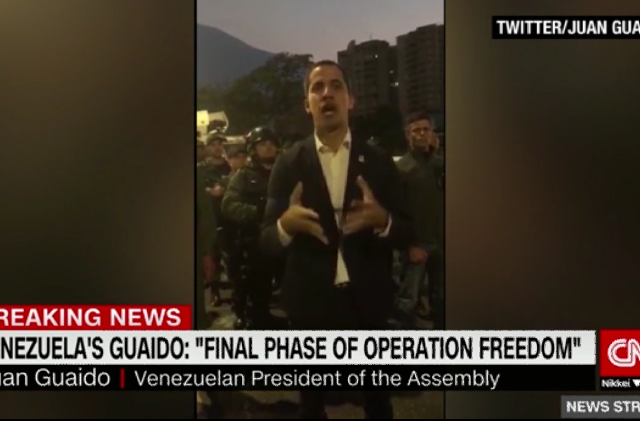 
The opposition seems to have Maduro on the ropes. According to Secretary Pompeo, Maduro was preparing to flee to Cuba until the Russians persuaded him to stay put.

.@SecPompeo says #Maduro was preparing to fly to #Cuba this morning, he was ready to depart "that's a fact"

To @jguaido, the National Assembly and all the freedom-loving people of Venezuela who are taking to the streets today in #operacionlibertad—Estamos con ustedes! We are with you! America will stand with you until freedom & democracy are restored. Vayan con dios! #FreeVenezuela

And President Trump promised sanctions if Cuba ceased intervention in the “destruction to the Constitution of Venezuela”:

If Cuban Troops and Militia do not immediately CEASE military and other operations for the purpose of causing death and destruction to the Constitution of Venezuela, a full and complete….

….embargo, together with highest-level sanctions, will be placed on the island of Cuba. Hopefully, all Cuban soldiers will promptly and peacefully return to their island!

Venezuela’s government is confronting a small group of “military traitors” that are seeking to promote a coup, Information Minister Jorge Rodriguez said on Tuesday on Twitter.

A Reuters journalist saw opposition leader Juan Guaido standing near an air force base in Caracas surrounded by a group of men in uniform.

U.S. national security adviser John Bolton on Tuesday singled out three senior aides to Venezuelan President Nicolas Maduro who he said must make good on commitments they purportedly made to the opposition for a peaceful transition away from Maduro’s rule.

We’ll me monitoring this story and updating accordingly.

Why is the Left so strangely silent about their socialist hero Maduro and the Venezuela? The same promises Chavez campainged on and instituted and Maduro has continued are exactly what the Dems promise now. These are always the promises of the Left. Oh, and get rid of those nasty firearms… they aren’t needed. Depending on the good graces of the military to save you leaves you as the low bidder for goodies only a socialist dictatorship has left to give. If Maduro prevails, only US forces will be able to win the day, but what will be left to save? And nation building needed. Until then send them Bernie and the boyz to solve the problem and show US what he can do.

why does LI use CNN as screen caps etc ?

DO NOT FEED THESE ANTI CONSERVATIVES FAKE NEWS PURVEYORS!

May the legitimate people of Venezuela recover their homeland and bring the socialist bastards to task.

His to the expeditious disposition of Maduro, his family and the entirety of his cabinet.

Seize all of the assets absconded, going back to the beginning of Chavez and hence forth.

Love to see the properties that have been seized reinstated to the rightful owners, from the farms on up to the oil industry.

Restore Venezuela’s essence and vitality, stamp out socialism at every opportunity.

Any likely scenario I can foresee will end up in disaster for Venezuela. It can’t be avoided.

Exactly which socialist is in charge will make little difference. And some improbable non-socialist wouldn’t work, either; the population is thoroughly accustomed to subsidized freebies and would be shocked to find that free-market prices are essentially the same as all those extravagant black market prices, since that’s all a black market is—a free market operating where the government-controlled market has failed. And somebody will be blamed for that whiff of reality.

I see no advantage to the US in having anything at all to do with any of this; not even cheerleading from the sidelines. The country is a self-made wreck and will stay that way for decades.

It’s more a question of having an openly hostile government that’s a puppet of Russia and Castro Inc., or one that at lest keeps it’s crazy inside and owes us a favor. As FDR apocryphally said of Somoza: “He’s an S.O.B., but he’s OUR S.O.B.”

The Marxists destroyed the free market in Venezuela by stealing factories and refusing to pay their debts. The first task of the new government will be the restore the free markets and that will have a huge positive effect on the country.

Unfortunately, there’s no solid reason to believe that anyone involved is even considering any such thing; nor that the electorate would be interested, after the era of socialist freebies (until, as usual, the piggy bank ran dry—but that detail will be ignored, as it usually is everywhere).

free-market prices are essentially the same as all those extravagant black market prices, since that’s all a black market is—a free market operating where the government-controlled market has failed.

Not quite. A black market is not a free market, because (a) it has high security expenses, since it has to keep out of the government’s way; (b) it has limited participation, since corporations and high-profile individuals can’t afford to get involved; and most importantly (c) it operates in the context of a government-created shortage. All of these make for higher prices than would obtain in an actual free market.

What do we hear from Sean Penn?

Will he show up with cigarettes tucked in his shirt sleeve, ready to preserve the leadership of Comrade Maduro?

What about Hungary, Czecholovokia, Bay of Pigs, etc? I wouldn’t count on our support.

Worse, if we do so, China and Russia (with nukes!) have taken Maduro’s side. We ought not assassinate the Archduke Ferdinand lightly.

We removed Quadaffi, and Europe was flooded with muslim refugee migrants. Do we want millions of Venezuelan refugees to come here so they can elect their Ilian Omar or Rashida Talib to work with AOC?

The real question is ..”can any nation recover from full on socialist missteps? Is the rabbit hole so deep its a political black hole?

On the plus side, logistics favor US militarily. China could evoke a Taiwan incident but Russia would be hard pressed. Neither would nuke over Maduro.

Where is ‘Joe For Oil’ Kennedy when the Venezuelans need him?

He was there for the ‘from each’, but seems to be having trouble with the ‘to each’.

Sez the Alaskan: “The real question is ..”can any nation recover from full on socialist missteps? Is the rabbit hole so deep its a political black hole?”

This is where the rubber meets the road. And it should be asked here as well. We have a significant portion of the US population paying no tax (45% approx) and multiple generations of families on public support, and it has proven near impossible to get them off the freebies and into even the shallow end of the mainstream economy.

I doubt Venezuela will fare better at it, if that is their goal, than the US has.

Time to deliver millions of liberty pistols, rifles and explosives to those fighting or overthrow the dictator.

There are millions of refugees from despotic socialism. If they are unwilling to fight for freedom let them suffer in chains.