The Numbers are in, Trump Campaign Building “Unprecedented War Chest”

The Numbers are in, Trump Campaign Building “Unprecedented War Chest”

The RNC had an even better first quarter, raising $45.8 million. 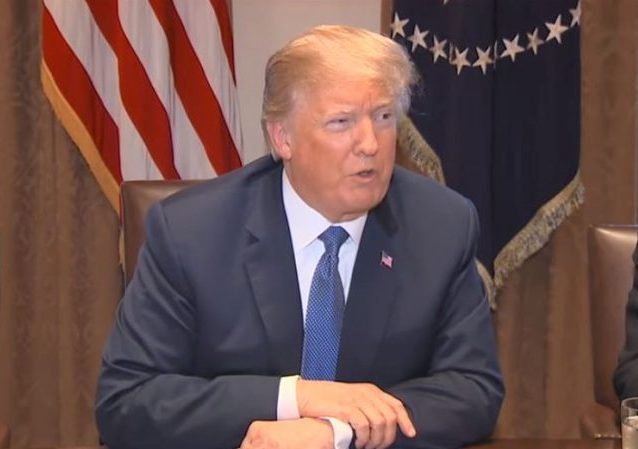 The RNC had an even better first quarter, raising $45.8 million.

The haul brings the campaign’s cash on hand to $40.8 million, an unprecedented war chest for an incumbent president this early in a campaign.

Trump’s fundraising ability was matched by the Republican National Committee, which brought in $45.8 million in the first quarter — its best non-election year total. Combined, the pro-Trump effort is reporting $82 million in the bank, with $40.8 million belonging to the campaign alone.

For comparison, Obama only had $2 million on hand at this time in 2012, though he made up ground quickly.

Trump formally launched his reelection effort just hours after taking office in 2017, earlier than any incumbent has in prior years. By contrast, former President Barack Obama launched his 2012 effort in April 2011 and had under $2 million on hand at this point in the campaign.

Obama went on to raise more than $720 million for his reelection. Trump’s reelection effort has set a $1 billion target for 2020.

Trump campaign manager Brad Parscale said in a statement that Trump “is in a vastly stronger position at this point than any previous incumbent president running for re-election, and only continues to build momentum.”

Trump’s fundraising with the RNC is divided between two entities: Trump Victory, the joint account used for high-dollar gifts, and the Trump Make America Great Again Committee, the low-dollar digital fundraising operation known internally as “T-Magic.” The campaign is set to launch a traditional “bundling” program — which it lacked in 2016 — in the coming weeks. Bundlers are mid-tier donors who bring in contributions from their associates.

Together, the Trump entities have raised a combined $165.5 million since 2017.

Ed Morrissey at Hot Air with the breakdown on the Democrat numbers:

That blows Trump far past Democrats — individually, anyway. ABC had noted that several Democrats reported “substantial totals” in Q1 despite the large field in which they compete. Bernie Sanders led the pack with $18.2 million, Kamala Harris $12 million, Robert “Beto” O’Rourke just under $10 million, and “Mayor Pete” Buttigieg $7 million, with other Democratic candidates falling below the Buttigieg Line.

Combined, however, the Democrats did pretty well against an incumbent president. The top four Democrats alone raised almost $47 million, almost 50% higher than Trump pulled in during the same period. Another $16 million from Elizabeth Warren, Amy Klobuchar, and Cory Booker puts the haul for Democrats at more than double what Trump raised. Bear in mind too that Trump has been campaigning for the funds too, holding rallies at regular intervals as he has done throughout his term in office.

On that score, Trump’s campaign has more good news. Besides the RNC’s work on joint fundraising, which would generally focus on deep-pocket donors, the Trump campaign announced that it has expanded its small-donor base significantly too.

Whether Trump can sustain the momentum moving forward is another story, but so far, he’s doing alright. Could be the makings of another 2016, where alllllll the polling data neglected to tell the real story.

Breaking Live…. Trump has received almost $50 million dollars from Russia. What is Russia trying to buy?

The Democrats raised more all together. Which they’re going to have to use against each other before they get to running against Trump.

How much can they raise after someone clinches the nomination is the question. I’m hoping they split the delegate vote so no one clinches before the convention. That would be fun!

BTW- Has Bernie registered in the Democrat Party yet? I vaguely remember some state parties instituted rules that will only allow a registered Democrat in their party primary.

It doesn’t matter. Bernie doesn’t have any better chance at the nomination this time than he did last time. Those super-delegates will go where the Obamas and Clintons want them to go, and that ain’t Bernie.

As a gentle reminder, just as jeb! and Hillary found out in 2016, money doesn’t assure victory in an election. Han Solo’s response to Luke’s good shooting was, “Don’t get cocky!”

that’s ‘President Trump’ to you. Thank you.