Officials indicate that Mark Steven Domingo was a “radicalized Muslim”. When warned about getting caught, he responded, “Martyrdom, bro.” 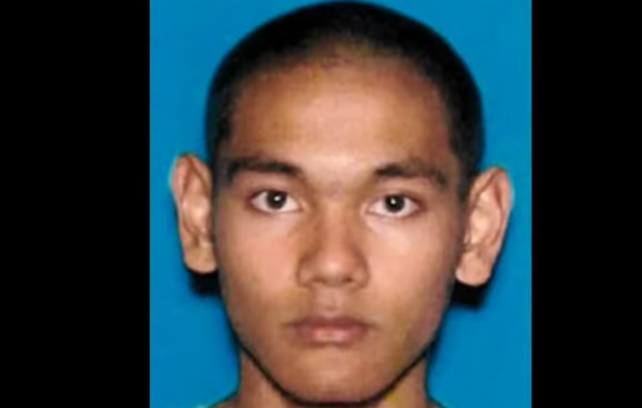 Mark Steven Domingo, 26, an Army veteran, was arrested Friday night after he took delivery of what he thought was a live bomb from an undercover law enforcement officer posing as a bomb-maker, officials said. He was charged with attempting to provide material support to terrorists.

According to a federal affidavit, “after considering various attacks — including targeting Jews, churches, and police officers — Domingo decided to detonate an IED at a rally scheduled to take place in Long Beach this past weekend. As part of the plot, Domingo asked his confederate — who actually was cooperating with the FBI as part of the investigation — to find a bomb-maker, and Domingo last week purchased several hundred nails to be used as shrapnel inside the IED.

“Domingo said he specifically bought three-inch nails because they would be long enough to penetrate the human body and puncture internal organs,” the affidavit states.

According to a criminal complaint filed by federal prosecutors, Domingo posted a video online in which he professed his Muslim faith on March 2, and the next day, he made another posting in which he said, “America needs another vegas event” – referring to the 2017 mass shooting in Las Vegas – that would give “them a taste of the terror they gladly spread all over the world.” Following an attack on two mosques that killed 50 worshipers in New Zealand on March 13, Domingo posted, “there must be retribution.”

Domingo allegedly plotted to set off the IED at a rally at Long Beach’s Bluff Park in opposition of a suspected White nationalist group that was expected to have an event in the area on Sunday.

Federal prosecutors have charged Domingo with providing and trying to provide material support to terrorists. A goal appeared to be martyrdom.

In one conversation described in court documents, the undercover FBI agent warned Domingo that he would probably be caught by authorities if he went ahead with his plan.

His plans related to the Santa Monica Pier, a popular tourist spot my family often enjoys, is particularly chilling.

The complaint states that Domingo expressed concerns that the radius from the explosion would extend beyond 100 feet. He then allegedly stated that if they conducted the attack at the Santa Monica Pier, he would remain on the pier and detonate the IED himself because he “was not afraid to die a martyr,” the complaint reads.

According to federal authorities, Domingo showed the confidential FBI source a map of the Santa Monica Pier and even pointed out locations where they could stand near the entrance of the pier.

Violent and ignorant…..yah that’s quite a belief system you’ve latched onto there

I’d be pleased to martyr him, in a field of fire ants.

“Radicalized Muslim” = a regular Muslim who follows the express teachings of their Qur’an.

The difference between a Radical Muslim and a Moderate Muslim:
The Radical wants to personally cut off your head with a dull knife.
The Moderate is happy to let the Radical do the cutting.

Surprised he was labeled as a radicalized Muslim. Clearly, the “correct” eyes did not get a hold of this and bury it before it hit the public airspace.

OR there is the possibility that we are about to see a bunch of Potemkin events where the FBI catches the bad guys. Because they need to try to regain a public reputation as being on the side of our country. Which they have deliberately thrown away since the Clinton Administration. The FBI had an undercover agent involved, and one wonders how much he was working to catch Domingo, or inspire him in his terrorist acts.

I do not trust them. If they are not disbanded and replaced, they need to be watched very carefully with caution as to their loyalties. Funny how they have missed or ignored so many Democrat crimes over the years. Almost like they don’t want to upset their bosses.

After 8 years of obama/jarrett, the bureaucracy of the US is loaded with traitors.

It’ll take a generation to ferret them out. Part of the process is the takedown of obama and clinton, and all the obvious conspirators around them.

Or was he an Islamized radical?

Tomorrow the LSM will ID him as a right wing extremist Nazi Trump supporter from Charlottesville.

The mainstream media headlines all highlight that he is a veteran….make of that what you will.

There a millions of veterans, we are legion. The media fakers have no comprehension of what it means to be a veteran.

Having served in the armed forces, we all share a common bond.

Part of the oath is all enemies, foreign and domestic. MSM may not understand what domestic means.

He’s mainstream Muslim, following the clear teachings of his faith.

Ridiculous to call him “radicalized”.

It’s only a matter of time until the left’s sedition results in an all-out shooting war and martial law.

The trick is who will be president when it happens. If it’s a democrat or swamp republican, kiss your ass goodbye.

Meantime, the Jew-hating ny times’ building will probably get blown up in the process. So it’s not all for naught.

Blowing up the Times Building would be a tremendous waste. It is one of the most advanced of its kind, with REAL energy-saving techniques and systems in use, as opposed to the pie in the sky stuff politicians mandate for their campaign contributors.

Let’s throw the Times out, and move in someone worthy.

This article must be wrong, wrong, wrong. Everyone knows that the FBI is overrun by criminals in its highest offices who have no purpose but to accuse and prosecute our innocent president who has never broken the law or lied in his entire life.

Hey gad? First, a lot of those people are now ex fbi. Even so, no one is claiming all of the day to day street level agents are corrupt. Just leadership such as Comey. So your post is especially lame

I will make that claim! If the everyday FBI agents were not corrupt they would put an end to the corruption of those at the top

Fibbies are no different from any other cop. When the decision is to to the right thing, or to keep a paycheck and pension, doing right goes out the windows, Oath Keepers notwithstanding.

Gave you a sarcastic upvote to go with all of your shadow downvoting.

I wonder if this is another FBI instigated terror plot to distract us from Barr’s inactivity on prosecuting the corruptniks in the FBI/DOJ?

Another loud mouth who started drinking at the wrong bar.

I’ve read that Islams do not drink alcohol.

I am increasingly convinced it’s not good police work that’s saved us since 911. It’s having idiots for terrorists.

Shoot the SOB (while he is trying to escape of course).