Her husband began CPR on a critically injured victim, unaware that it was his wife. 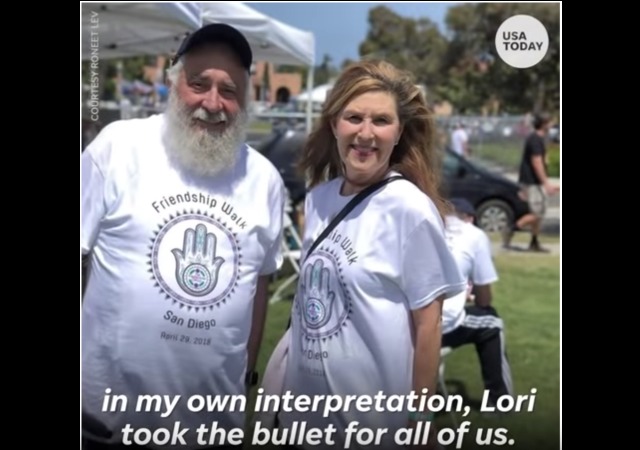 San Diego is mourning the loss of Lori Gilbert-Kaye, the woman killed in a shooting at Chabad of Poway near San Diego, as she was laid to rest amid praise for her kindness, faith and sacrifice.

Kaye, 60, died taking bullets for Rabbi Yisroel Goldstein, who was evacuating children from the synagogue after gunfire broke out, Goldstein said.

Three people, including Goldstein, were injured when a suspected gunman opened fire during a peaceful Passover service Saturday – exactly six months since the shooting at the Tree of Life synagogue in Pittsburgh. Authorities say the suspect in Poway, California, had posted an online “manifesto” in which he criticized Jews and celebrated the slayings of Muslims at mosques in Christchurch, New Zealand, last month.

Kaye had been longtime friends with Goldstein and a devoted member of his congregation.

“Lori took the bullet for all of us,” Goldstein said a press conference Sunday.

The rabbi called Kaye a pioneer member of the congregation and “a person of unconditional love.” She had come to the temple that morning to honor her mother at a memorial service, he said.

Kaye’s husband, a physician, was also at the synagogue and rushed to aid the victims. He began to do CPR on a critically injured victim, unaware that it was his wife. When he realized her identity, he fainted.

Noya’s uncle Almog Peretz was hit in the leg. Shrapnel from that is believed to have hit Noya, passing through her right leg. Shrapnel also hit her face.

…”He came to kill us. He came to grind us. The amount of bullets he had on him. He came to destroy this place,” Dahan said of the attacker. “He was covered in magazines. They were all over his body.”

Reports are now coming out that the FBI got tips on a threatening social media post just minutes before Saturday’s shooting, but not in time to take any action to prevent the attack.

“Approximately five minutes before the shooting at Chabad Synagogue in Poway, California, the FBI received submissions through its online tip website and tip phone number regarding an anonymous threatening post on a social media site,” an FBI official told BuzzFeed News.

…One tipster told the site he logged on to far-right message board 8Chan around 11:05 a.m. — around 25 minutes before John Earnest allegedly opened fire at the synagogue, killing one congregant and injuring three others.

There he found a post under Earnest’s name, linking to a violently anti-Semitic manifesto and a Facebook page where he said he would livestream a mass shooting.

Prayers of comfort go out to all the victims and their families.

Why do Democrats hate Jew and unborn babies so much?

notamemberofanyorganizedpolicital in reply to mailman. | April 30, 2019 at 9:35 am

Why? The absence of God is not a vacuum.

When a person removes a cancerous testicle, it’s not because he hates the testicle, but because of the threat the testicle presents to him. It’s the same with the fetus–a similar unwanted growth that threatens life and health.

You should consider that with your frontal lobe, as it is clearly malignant.

A lot of Jews fall for leftist garbage, and perhaps non-Jewish immoral fascists despise them for their stupidity and morality.

This is so sad! My God, what will it take…

It’ll take a war. It always does.

Oh, so 8-Chan is now far-right, and so by extension is this Trump-hating malignant shooter.

The narrative grinds on, facts be damned.

the FBI got tips on a threatening social media post just minutes before Saturday’s shooting, but not in time to take any action to prevent the attack.

This reminds me of the warning George W Bush got on Aug-6-2001, that the CIA had just discovered that, several years earlier, Osama bin Laden had taken a decision to carry out attacks in the USA, and that the FBI reported possible preparations for either an airline hijacking or a truck bomb on a federal building. The warning was taken seriously, but there was nothing that could be done with it except to boost security at airports and at federal buildings, which was done.

The press needs to be moral, and not print the name or photos of these narcissistic maniacs. It just enourages the other ones out there.

It takes a gun to stop an armed killer. Let people take care of business.

Yes, and the rabbi said that when the Border Patrol officer started attending the synagogue he asked him to come armed, just in case.