Anti-EU parties could be the ‘biggest single group’ in EU parliament, polls suggest. 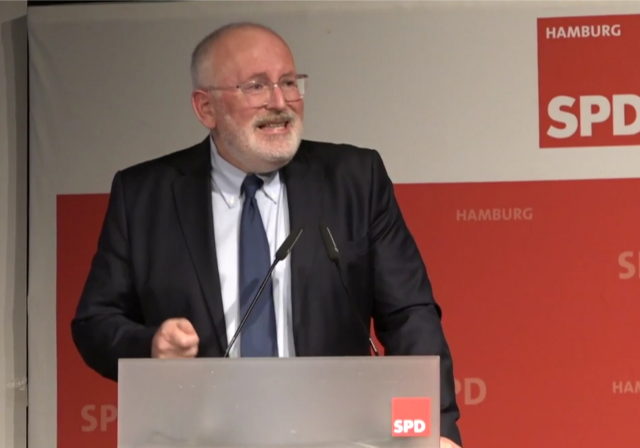 Right-wing parties are using the issue of immigration to mobilize voters ahead of the next month’s EU election, the European socialists complain. “Political predators preying on migration crisis,” the socialist candidate for the EU’s top job, Frans Timmermans, told French TV network EuroNews.

Timmermans’ remarks come as most projections show big gains for the anti-EU nationalist parties at the cost of pro-establishment conservative and socialist blocs. The anti-EU right-wing parties are set to form the “largest group in the EU parliament,” recent official polls show. Dutch Socialist Timmermans, currently serving as the European Commission’s first vice-president, is hoping replace EU Commission president Jean-Claude Juncker in the next legislative cycle.

The comments by the EU’s top socialist candidate highlight the vulnerability of the pro-establishment parties on the issue of immigration. Despite concerted effort by mainstream political parties and European media to suppress the debate on immigration, the nationalist parties across Europe have made the EU’s open borders policy the central issue in the upcoming election.

The EuroNews reported the statement made by Timmermans:

“The only thing is that now political predators are preying on the fact that people feel that we can’t get in control of this and playing identity politics, saying these people don’t belong here, they are a threat to us and we need to stand firm against that,” Timmermans continued.

“We need to remain a safe haven for real refugees but we also need to say to people who don’t have the right to asylum that they need to return to their places of origin,” he said.

Timmermans is among those hoping to succeed Jean-Claude Juncker as president of the European Commission after May’s elections.

The coalition wants to put an end to illegal immigration, ‘protect national culture,’ and stop the centralization of power in Brussels, media reports say. “To save Europe, you have to turn away from the European Union,” Le Pen said recently, while pledging to pull her country out of unfavorable trade agreements and defend national borders.

The issues of immigration and national sovereignty are resonating with voters. In France, Le Pen’s Rassemblement National (RN) is polling ahead of President Emmanuel Macron’s ruling en Marche.

Nigel Farage-led Brexit party is leading in the UK with 28 percent of the projected votes, 6 points ahead of the Labour party. Prime Minister Theresa May’s Conservatives are now down to 13 percent—a staggering 15 percent behind the newly-formed Brexit party, latest YouGov polls show.

Most polls show the Alternative for Germany party trailing behind Chancellor Angela Merkel’s Christian Democrats and left-wing Social Democrats. The AfD, however, is projected to emerge as the biggest party in former East German states.

The ruling elite in Brussels are terrified at the prospect of a unified anti-EU alliance. If the right-wing parties manage to get one-third of the seats in the European parliament, as some polls suggest, they would “paralyze decision-making at the center of the EU” and end up “curbing [Brussels’] liberal orientation and returning power to member states,” the pro-EU think tank European Council on Foreign Relations (ECFR) fears.

Refusing to deal with the burning issue of illegal immigration, the pro-EU parties are hoping to woo European voters with a symbolic “Green” agenda. Socialist Timmermans has promised a Europe-wide ‘CO2 tax’ and a ‘plastic legislation’ to ‘tackle climate change.’

Marine Le Pen: ‘To save Europe, you have to turn away from the EU.’

Gaslighting. The leftists and their NGO (Soros-funded) buddies created the problem, but it is the conservatives fault for drawing attention to it.

Preying, Pouncing, Seizing … it’s all the non-left do.

At least we are getting some exercise out of the deal.

This group is one of many of the spawn of the original NYC-based Council on Foreign Relations, formed in 1921 to turn public opinion to favor world government. In this effort it was joined by the UK counterpart, the Royal Institute of International Affairs (RIIA; often called Chatham House), which was also formed in the 1919-1921 time period.

The aim of these two groups, comprised of the money-ed interests of the USA and the UK, was to concentrate more and more power into the hands of fewer and fewer. That aims continues to this day.

The EU, NAFTA, the African Union, the numerous deliberately mis-titled “free-trade” treaties of the last 30 years are intended to act as regional arrangements under Chapter VIII of the UN’s Charter which in time will be merged. Voila, world government.

It is for this reason that the pro-sovereignty, anti-EU nationalist parties are seen, rightly, by the globalists as a threat to those globalists and their lust for power.

This one world government shit is about wealth redistribution, from the West to all the shit hole countries.

Refusing to deal with the burning issue of illegal immigration

They won’t deal with legal immigration, either.

European civilization as they know it can’t survive excessive levels of immigration, legal or otherwise. No polity can survive an alien flood of more than about 1% annually.

One thing to note. The European Parliament has very little power. The real power is in the European Commission, and that is beyond the control of the voters unless they can convince a country to withdraw from the EU.

It is not beyond conception that the European Commission will do as it has done a number of times and say the people voted the wrong way and force re-votes until their people win.

In Europe, only the elites and illegal invaders have rights.

Now that you mention it, it is kinda like here.

When you cannot win by reason, you gain power violence, propaganda and bribery.

When I listed the weapons I qual’d with in the Navy I left out the M870 Remington. I probably forgot a few others. I only remembered the pump action Remington when I thought about the Thanksgiving Turkey.

Now, in other good news, my new best friend Abdul is looking to fix me up with a nice Iranian girl. He has already a candidate but he thinks she might be too tall for me.

I’m like, bring her on. I’m not scared of heights.

Twice in the past two weeks I asked for him by name, now the guy thinks I’m a Saint.