No Joke: Jewish Comedian Who Played President on TV Elected Actual President of Ukraine in Landslide

No Joke: Jewish Comedian Who Played President on TV Elected Actual President of Ukraine in Landslide

Besides Israel, Ukraine is the only country with a Jewish president and prime minister. 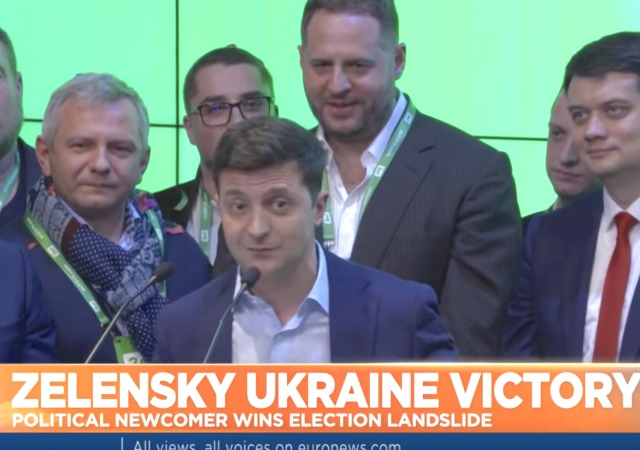 Over the weekend, Ukraine held its presidential election. Current President Petro Poroshenko, who won in 2014 after the ouster of Viktor Yanukovych, lost to comedian Volodymyr Zelenskiy in a landslide.

Television became real life since Zelenskiy played “school teacher Vasyl Holoborodko, who by a sheer stroke of coincidence becomes Ukraine’s president,” on the show Servant of the People.

However, unlike our election, “the results of the first round of the election and polling data indicated it was unavoidable.”

But for Zelenskiy’s team and the 13.5 million Ukrainians who voted for him, the comedian-turned-politician is hope for positive change.

On election day, the Kyiv Post surveyed voters exiting several polling places across the city. In many cases, they said they had voted for Poroshenko in 2014, but that he did not live up to their hopes. For them, Zelenskiy offered an alternative.

Ukraine is “just following the global trend of replacing old elites,” said Aivaras Abromavicius, Ukraine’s former economy minister who advised Zelenskiy’s campaign. In 2016, Donald Trump was elected president in the United States, and there have been other examples geographically closer to Ukraine.

Poroshenko led Ukraine after Euromaiden kicked out Yanukovych, a president strongly backed Russia, after he rejected a deal with the European Union.

Ukraine dived into a war with eastern Ukraine taken over by rebels loyal to Russia. This crisis remains as Putin seems unwilling to let go of the Soviet republic considered the jewel of Russia since the country supposedly started in Kyiv.

Zelenskiy had defense expert Ivan Aparshyn on his team, who has outlined plans for the country’s defense and security sectors. From The Kyiv Post:

As Aparshyn wrote in its blog on the Obozrevatel media outlet on Apr. 22, the Ukrainian Armed Forces will be developing forces of contracted and voluntary service “free of shameful draft” and reinforces with an active reserve force and a territorial defense system.

It will be commanded by combat-hardened officers “focused on victory and able to preserve a soldier’s life,” he added.

Besides, according to the expert, the Zelenskiy administration intends to pull back the shroud of ubiquitous secrecy and transparency in the sector.

The Defense Ministry’s budget will be maximally overt to public, so that “every person could keep track of every kopeck, the effectiveness of spending it and bringing it to soldier,” according to him.

“We’re not going to continue with the practice of concealing expenses on some clandestine programs and obscure projects,” the expert wrote. “It is this transparency that will allow for increasing payments for military personnel and bringing it to the level of allowances in NATO nations.”

Aparshyn also wants to open the state defense procurement to Ukrainian businesses so they can have a equal shot at the weapons market with state-run businesses. It’s already decided that “the UkrOboronProm, the state-run defense concern of over 130 military production enterprises will be reformed and stripped of its authority to define the policies of defense production.”

The defense and and security sector will continue to work with NATO and the European Union, “particularly in terms of reaching full compatibility of Ukraine’s Armed Forces with NATO during ‘possible joint operations.'” As much as I would love for Ukraine to join these two, I doubt it will happen since Europe relies on Russia for its energy. It always comes down the oil and natural gas.

Anyway, the team promises the military with “decent standards of living” along with “full social benefits set including medical insurance and education in top-level military academies.”

More importantly, Aparshyn promises to release all the information about the war in eastern Ukraine:

Moreover, the expert noted, the next administration would “make public the truth” about disastrous battles of Ilovaisk and Debaltseve of 2014-2015, as well as about the beginning of Russia’s war in Donbas and Russia’s invasion in Crimea.

“In the nearest time, people will get to know the truth,” he wrote.

“Nobody is going to hide anything from anyone. And officials who made decisions or were idle where actions were needed will be held responsible.”

Ukraine is also the only country outside of Israel with a Jewish president and prime minister. From The Jerusalem Post:

After all, Russia and other critics claim Ukrainian society has a serious anti-Semitism problem and legacy.

“Imagine, a pure-blooded Jew with the appearance of a Sholom Aleichem protagonist wins by a landslide in a country where the glorification of Nazi criminals is enacted into law,” wrote Avigdor Eskin, a Russian-Israeli columnist, in an analysis published earlier this month by the Regnum news agency.

Eskin in column on Zelensky downplayed allegations of widespread anti-Semitism in Ukraine, attributing much of the attention to the problem in media and beyond to propaganda by Russia, which is involved in an armed conflict over territory with Ukraine.

Israel has condemned Ukraine as one report considered the country “as a regional trouble spot” when it came to anti-Semitism:

Ukraine also came under fire from US lawmakers for glorifying Nazis. Ukrainians justified it because they considered these people “as fighters for Ukrainian freedom who it insisted sided with Germany only in order to fight against the Russian-controlled Soviet Union.”

The likes of obama and clinton are clowns, but they are not funny.

Zelensky? Yanukovich, the Russian stooge, wasn’t all that funny.

Fine Report. You’re sometimes funny. No offense, you’re a racist. But if there is one thing you are not, it is an anti-semite.

The Ukraine suffered horribly during the Holodomor and ‘De-Kulakization” purge. Then they were part of the Clinton-Obama self-amusement project in that country, a project of motives difficult to discern but with the end result of sparking a Russian undermining and invasion campaign. Sounds like the people are desperate. They certainly ain’t no “Nazis”, an accusation desperately thrown at them after the HillBamaNuland attempt to create a color revolution in the Ukraine predictably imploded.

I wonder if there’s anything an average American can do to help them, in whatever small way. Direct US government intervention is absolutely *not* the thing to do.

The only practical way to help them is to get them (along with the rest of Europe) off the Russian oil and gas teat. It would be easier to engineer a putsch against Putin.

Trump has been a real surprise. It almost seems like Bismark was correct about God: “God has a special providence for fools, drunks, and the United States of America.”

How long before we use up His patience??? — ps I’m not even religious, but it’s clean that we who are born in the USA pulled a free winning ticket that no generation born after about 1946 collectively deserves (includes myself).

We had one time when we were not smiled upon: Our Civil War has a horror, almost a self-genocide, but unlike civil wars today the killing and crippling stopped when the truce was struck.

Mmmm? Ukraine had state-run arms businesses that had a legal monopoly? Isn’t that a gigantic incentive to keep tensions high and keep arms procurement ongoing so that anyone connected to those businesses made big profits?

Not that they don’t have legitimate Russia problems, but the idea Ukraine was going to shoot its way out of those problems was always remote.

From my somewhat shaky memory files:

Poland, Lithuania and Ukraine signed and formed a military pact called something like LITHPOLUKRBRIG about five or six years ago and modeled it on NATO brigade guidelines. I think it was stood up and booted three years ago as a fast reaction force. Check wiki.

I’m pretty certain that Ukr. military was sending prospective new officers to officer candidate school in Poland some six years ago. The Ukrainian military was riddled with Russian moles.

During the early period of the war most of the UKR fascists joined the Azov Brigade and were killed. They were amateurs and went to slaughter. Russians played this up big time. I doubt there were more than a few hundred Svboda OUN-Banderists in this so-called brigade.

Conversely. Putin relocated Russian mercenary officers from Chechnya and rounded up every drug addled miscreant he could find, outfitted them with gear, light machine guns and mortor crews and innocuous ATM pay cards and shipped them to Crimea and later Donbas. Norwegian newspaper Aftenposten ran photos of the convoy. They had mortars set up in semi-tractor trailers with the roofs/tops of the trailers removed. People in Donbass photographed these mobile mortar trucks from the old soviet era highrise apartment buildings.

I watched many hours of candid, unedited video of the street battles in Kyiv and a few other large cities in Ukraine – some of it uploaded by Oleh Tyanybok’s right wing group Svoboda(?) and indepedent Russian merc infiltrator-thugs (tituska?) – which flooded these street battle zones.

There was some pretty violent acton going on both sides. I watched one video of a supposed maidan-Kyiv guy shooting what looked like a soviet era .380 subcompact at a suspected SVR snipers perch on a six story building in Kyiv.

Another video showed what appeared to be a Russian thug team beating a Ukrainian and then shooting him using one of those Russian .380 subcompacts. I was pretty alarrned by that and emailed the Swedish and Norwegian embassy with links and screenshots of the event.

All of those early contemporaneous videos are long gone now – either withdrawn by uploaders or buried under an avalanche of Russian RT disinformation videos.

Another thing. That famous Russian biker and leader of the Night Wolves? He promotes “rust and fur” Cossack festivals. Putin makes a big, loving fuss over him. Whatever. There really are Hells Angels affiliates in East. Putin used these guys to rough up the EU Black Bloc leftists. Video. They literally bussed this rabble around Ukraine – the leader wore his 1%er patched MC vest and he’d review his troops as they tumbled from tourist buses. Then he set them loose with those hard plastic-rubber knotted truncheons – a weapon favored by Rus thugs. They beat the crap out of people at an oblast administration building south of Kyiv on the Dnieper river. They then beat a Harley Fatboy with those same clubs.

People thought it I funny line when Buckley said I believe in the 50s “I would rather be rules by the first 1000 names in the Bosron phone book” or something to that effect.

He was taking about the motives and the eventual habtits and attitudes of the people who go into government and electe office and that the verage person could make better choices becuase they weren’t making poltical ones.