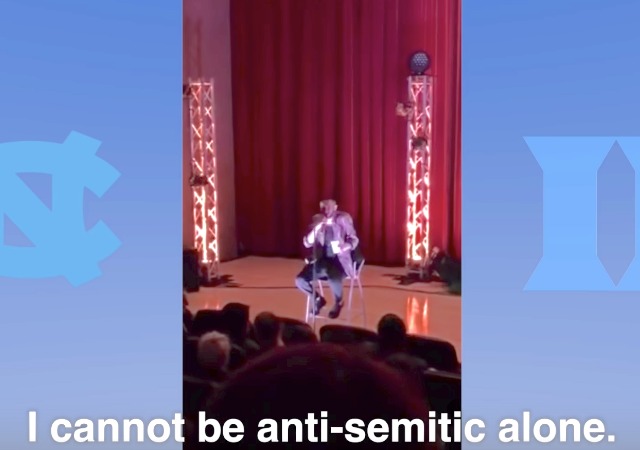 Last month, the University of North Carolina in Chapel Hill held a conference on its campus called “Conflict over Gaza: People, Politics, and Possibilities.” According to its website, it:

…will shed much needed light on the current realities in the Gaza Strip, giving participants a deeper understanding of the context of these realities and offering concrete options that can better the lives of Gazans. The conference also highlights Gazan culture–music, films, food, and art–to showcase the beauty that goes along with the challenges of life in the Gaza Strip.

This was the conference’s agenda: 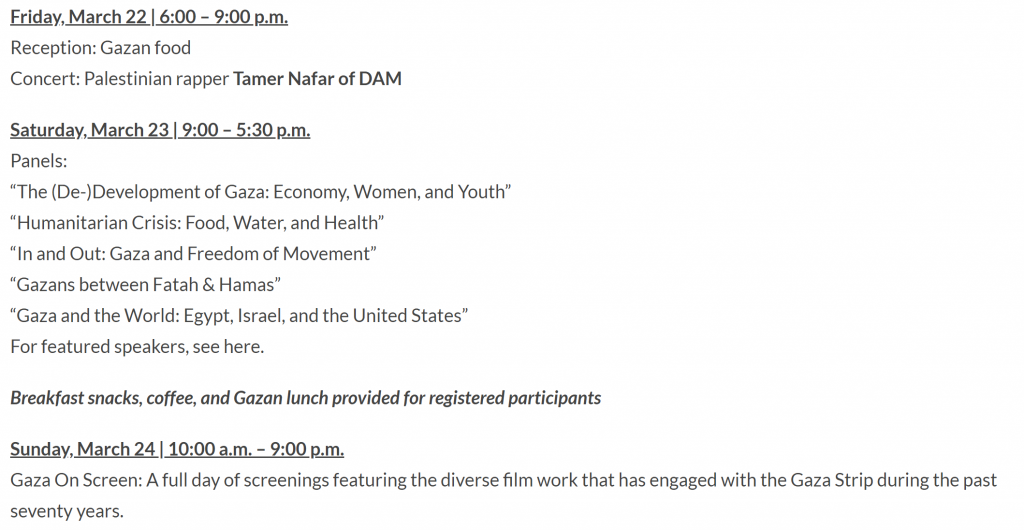 On the first night of the conference, Palestinian rapper Tamer Nafar performed, and filmmaker Ami Horowitz took this video of Nafer:

The News and Observer detailed the anti-Semitism in Nafar’s performance (emphasis mine):

In edited clips from his performance, posted online by Horowitz, Nafar says on stage: “This is my anti-Semitic song. … I know it sounds R&B stuff, but don’t think of Rihanna when you sing it. Think of, don’t think of Beyoncé, think of Mel Gibson. Go that anti-Semitic. … Let’s try it together. I need your help. I can’t be anti-Semitic alone. … Oh, I’m in love with a Jew. … You look beautifully anti-Semitic.”

Horowitz also conducted hidden-microphone interviews with attendees, which he included in his video. A student who attended the event told The Daily Tar Heel that Horowitz approached him under false pretenses, using the name “Sam.”

“When he said, ‘This is my anti-Semitic song,’ I think he was alluding to that, like, if you criticize Israel, people are going to call you an anti-Semite. That’s how I perceived it as a Palestinian,” UNC junior Fouad Abu-Hijleh told The Daily Tar Heel. “Now obviously for an American audience, I don’t know if that translated well or if that carried its meaning.”

The full song “Mama, I Fell in Love with a Jew” and music video tell a story about a Palestinian man and a female Israeli soldier who meet on an elevator. The video ends with their families fighting at a wedding and is embedded with references to how Palestinians, from the singer’s point of view, are treated poorly or get less in the Middle East.

Both UNC and Duke, which co-sponsored the conference, responded:

Congressman George Holding of North Carolina’s 2nd Congressional District has called for an investigation into the “Conflict Over Gaza” Conference held at UNC Chapel Hill in March 2019. Videos continue to surface from the taxpayer-funded conference that showed anti-Semitic rhetoric from a performer at the event and anti-Semitic materials in UNC’s Davis Library. From The News & Observer:

“A North Carolina congressman called Monday for a federal investigation into a Middle East conference co-sponsored by Duke University and UNC-Chapel Hill and suggested federal grant money could be pulled from the two universities’ Consortium for Middle East Studies.

Rep. George Holding, a Raleigh Republican, wrote a letter to Education Secretary Betsy DeVos asking her department to investigate the “Conflict Over Gaza: People, Politics, and Possibilities” conference held March 22-24 at UNC, claiming that he has seen “reports of severe anti-Israeli bias and anti-Semitic rhetoric at a taxpayer-funded conference.”

Not a DIME of taxpayer money should be going towards anti-Semitic “academic” conferences. Here’s the letter I sent to the Department of Education urging an investigation. pic.twitter.com/yqngbc98J6

We have started to see some additional backlash in response to the anti-Semitism spewed at the conference. A webpage named a number of other sponsors of the conference. If you go there now, you get this error message: 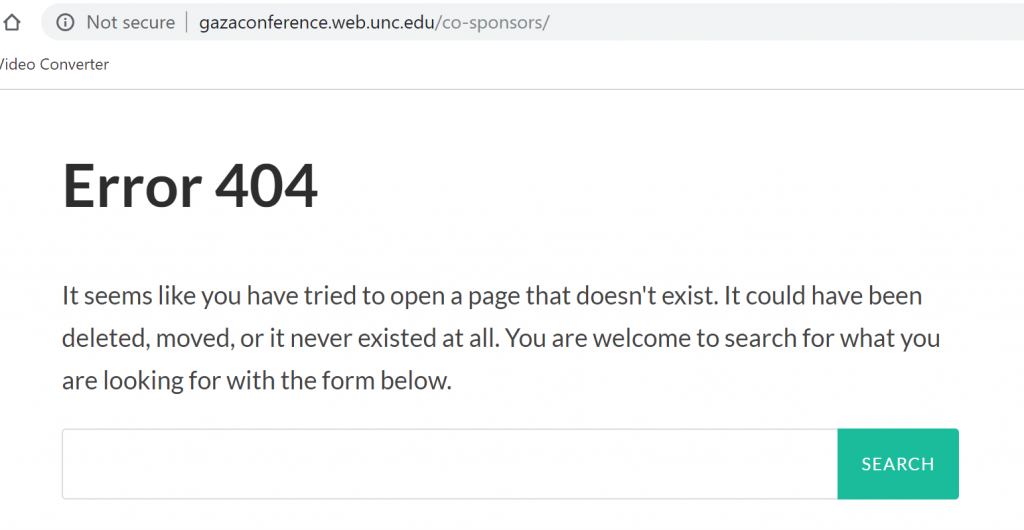 Jonah Kaplan from WTVD-TV tweeted that 27 co-sponsors want a refund:

He also tweeted some internal UNC emails that show a lot of blame and finger-pointing:

Between the sponsors, the internal investigations, and now the Congressional inquiries, there is obviously a lot to learn and discuss. But don’t expect much news from inside the Raleigh/Durham media market, or the national MSM as a whole. As I noted in a tweet the other day, only one local TV station covered Nafar’s disgusting anti-Semitism:

A Palestinian rapper spewed #AntiSemitism on the campus of @UNC and it wasn’t a national story.

It only became more of a story after the Congressmen started asking questions. How sad that that’s what it takes to get coverage of anti-Semitism on American college campuses, an ever-growing cancer that rarely gets exposed to sunlight.

Legal Insurrection will keep you up to date on the fallout from this Judephobic hate fest.

Just when I thought Palestinians could not get any more obnoxious and unlikable, this guy shows up and says, “Hold my beer!”

Palestinians are a lower form of life. How does a whole group manage to collectively degrade themselves to this degree?

https://www.youtube.com/watch?v=7zxX_yWM2us has Palestinian rapper Tamer Nafar and his band DAM performing their signature song. I am going to guess that Ami had an inkling of what he would find, given that agenda featured the band’s headliner. What’s not to like?

Lyrics https://genius.com/Dam-mama-i-fell-in-love-with-a-jew-lyrics
The video has some S&M brutality and “blackface.” What thought goes into providing a sponsorship? The last such academic sponsored conference I attended had a Friday afternoon change of schedule so that a presenter could quote and extol the poet Hassan Nasrallah. Ami is brave. Worse than the “art” is the audience response of appreciation. You look from face to face for someone to step forward to ask for a stop, and then when you see beaming faces, you realize that you are not sure whether you will be the next object of disdain or worse.

These “Palestinians”, certainly don’t want to be treated the way they treat the Jews……But, that would be “Poetic Justice”…..{ EH?}….tHIS RACE OF ARABS, HAVE BEEN INVOLVED IN TRIBAL WAR, FOR “THOUSANDS” OF YEARS, & THEY HAVE NOT A CLUE HOW TO BE DECENT, & LAW ABIDING! ( THEY MUST BE TREATED ACCORDING TO INTERNATIONAL LAW}