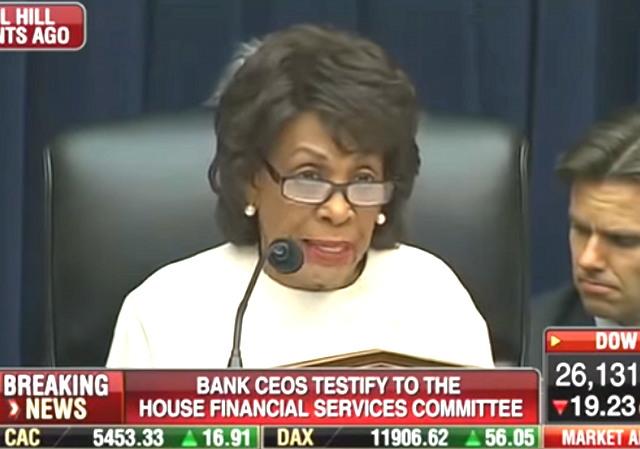 The student loan debt crisis is real and a very serious issue.  No one disputes this. Rep. Maxine Waters (D-CA), who now chairs the House Committee on Financial Services, brought it up during a hearing with bank executives this week and made a complete fool of herself.

Apparently, no one has told Waters that banks stopped offering student loan services ten years ago.

Waters began by explaining the student debt crisis, saying, “Today, there are more than 44 million Americans that owe … $1.56 trillion in student loan debt.”

Then, Waters turned the questions on the bank executives, asking what they intended to do about the student debt crisis: “What are you guys doing to help us with the student loan debt? Who would like to answer first? Mr. Monihan? Big bank?”

“We stopped making student loans in 2007 or so,” he responded.

Maxine Waters has no business chairing the House Committee on Financial Services, and not just for this latest example of her beclowning herself.

As I recently wrote at Townhall:

Now that the Mueller investigation is over and found no Trump collusion with Russia, Republicans serving on the House Intelligence Committee have called for the resignation of Rep. Adam Schiff (D-CA) as chair. Their demand is reasonable. Schiff has spent over two years advancing the theory that Trump colluded with Russia to win the 2016 presidential election…

House Republicans were right to demand Schiff’s resignation, but they shouldn’t stop there.

Waters has worked hard to earn her embarrassing distinction as a promoter of the Russia collusion theory.

Just like Schiff, Waters has been a regular guest on CNN and MSNBC for over two years, and her appearances had nothing to do with the people of her district, who she was elected to represent.

She was there simply to provide hope to progressives who dreamed of a day when Trump would be led out of the White House in handcuffs.

This is a woman who urged the confrontation of Trump officials in public by angry mobs.

That alone should disqualify her from serving as chair on any committee.

Maxie can always pull that get out of stupidity free race card she likes to use from time to time.

As a group blacks will rally around her, regardless of what comes out of her mouth. Same with white liberals.

But waters only gets away with this because of the fecklessness of the GOP.

Yep. Dealt with regularity and experience right off the bottom of the deck!

She strikes me as cloddish and obtuse enough not to know when to be embarrassed.

Owing to her amoeba-like sense of self-awareness.

It’s one way they can release the frustation of their own feelings of impotence, real or imagined This continues in much of black culture, all the way up.

“No one can know how a black person feels except another black person” is the new mantra, and a pile of feces. That thinking is pathetically self-destructive, childishly indulgent, and as big a crutch as any drug, and it is being happliy exploited by black so-called ‘leaders’ as degenerately as any heroin dealer in the hood exploits its residents.

I suspect boxes of rocks are becoming weary of the comparison.

Smarter than a rock, but not as smart as a tree is the comparison we used when describing orthopedic surgeons. 😉

That is “colder than a well-digger’s elbow”

A true case example of affirmative action. This includes her and those that prepared the documentation she used. Only thing missing is for her to accuse the banking industry for not intervening…As if they could.

The student loan debacle is their baby and it requires shifting the blame.

Yes, somebody on her staff gave her the stats on how many Americans owe student debt and how much they owe, so why didn’t this same staffer alert their idiot boss to the fact that the federal government has been the one making all the student loans for the past decade? Is is because Mad Max hires affirmative action dopes who are as ignorant as she is?

There is the joke that the Department of Education is now the 2nd biggest bank in the US (after the Fed).

I guess Maxine has no sense of humour.

She probably laughs at the likes of this:

Q: What do you get when you offer a Maxine Waters a penny for his thoughts?
A: Unwanted change.

Q: What is the difference between Democrat Maxine Waters and a prostitute?
A: The prostitute provides value for the money she takes.

Q: Why is it bad when the Democrats control the House, the Senate, Supreme Court, and the White House?
A: Because they only have themselves to blame.

Q: Why do you never hear about burglars robbing Maxine Waters?
A: Professional courtesy.

Q: What does politician Maxine Waters and diapers have in common?
A: They should both be replaced regularly and for the same reason.

Q: What is the difference between a magician and Maxine Waters?
A: The magician returns your wallet at the end of the performance.

Even if banks were still in the student loan business, they can’t be held responsible for the exorbitant cost of a college/university education/irresponsible borrowing practices of students nor the ponzi scheme/fraud that most higher ed is today. Ie: just because you financed something doesn’t mean you can actually pay for it.

Agreed. Sometimes you have to “follow the money” in both directions.

“…just because you financed something doesn’t mean you can actually pay for it.”

When you’re borrowing from a for-profit bank there is a high likelihood that you can pay for it. They have underwriting and risk management systems in place to maximize that probability. It’s all very sophisticated and necessary for them to make a profit.

When the government is lending the money, not so much. Things like FEELZ and FAIRE very quickly get in the way, especially when pandering morons like this mental midget and her ilk get involved.

Its also one on the major reasons increases in tuition greatly exceed the inflation rate.

Yep, higher prices and more administrative overhead are sure to follow when the government subsidies kick in. Every time.

The infantile incivility, obnoxiousness and know-nothing stupidity of the Dhimmi-crat/Dumb-o-crat career apparatchik-demagogues, exemplified by corrupt crone, Waters. Has this vile harridan ever held a private sector job for any substantive time? Of course not — like her Dhimm-crat/Dumb-o-crat colleagues, warming a government sinecure seat, over decades, is all that she knows. And, even then, she can’t be bothered to learn basic facts regarding government policies and timelines.

Not only are the Dhimmis/Dumbs a bunch of totalitarian jackboots, they are ignorant and foolish jackboots. All the more dangerous for their stupidity.

We are blessed to be governed by ELITES !
mad max, tactile weapons gillibrand, tip over johnson, and the list goes on and on !

You know, a student with money’s a little like the mule with a spinning wheel. No one knows how he got it, and danged if he knows how to use it.

In the 1980’s, the city of Dallas had a councilwoman named elsi faye Higgins, who lacked any intellegence such that she required an assistant to sit in the from of the audience to use flash cards tell her what to say and how to vote.

Maxine waters is a close to the same level

The federal government was set up to do three things: provide for the common defense of its members, deal with foreign states on behalf of its members and to settle disputes between its members. That was all it was supposed to to do. Now, government has become a monster. It is only a matter of time before that monster is slain. And, its population by people like Maxine Waters only accelerate its demise. The real question is how badly will the rest of us be hurt when it collapses.

I had to take a calculus class at a local community college because I wasnt doing well in the university at which I was enrolled. I was amazed st how many people showed up for open enrollment. The campus was crowded every day I had class until the student loan refund checks were handed out. Then “poof” all the up front parking you could want. 1/2 the spaces were empty.

She’s probably still concerned about the possibility that the island of Guam might tip over if we station more troops there.

Student loans were nationalized nearly a decade ago under the outstanding leadership of President Barack Obama.

Granny Waters embarrasses herself daily just by leaving the house.

She’s so dumb she didn’t even buy a house in the district she is alleged to represent!

made a complete fool of herself again.

Nationalization of student loans was part of Obamacare. Apparently, even 10 years after passing it, she still doesn’t know what was in it.

Maxine and every federal politician who down not live in the district they represent ought to be prosecuted and kicked out of office.

Hey are the Commiefornia Demoncrats getting free military flights home every weekend again now that the Demoncrats control the house?

How much of those student loan repayments are being paid back to the politicians as “political victory fund donations” for legislation rendered?
Feds shouldn’t be any part of education funding. Why do we waste money at the federal level when we have state and local education departments?

I had a friendly debate with a black friend yesterday: a rather successful guy. His ignorance dwarfed Maxine Waters.

It was incredibly shocking – he totally recited what must be the black/democrat emails of the week.

On the other hand, I think I got him thinking.

Maxine “Impeach 45” Waters is the head of the Demagogues’…er… Democrats’ House Banking Committee! I don’t know about you, but I’ll be sleeping better at night in the knowledge that this genius is watching over all of my bank accounts! Honey, do we have a mattress with a hole in it?

“Life is hard, especially if you are stupid” – John Wayne

Our voting and apportionment laws make this neither entertaining nor relevant. The black vote will always go to the furthest left and most, ‘real’ candidate. That means Waters will remain a sterling representative of our black representatives forever. We’ll be listening to questions about islands tipping over and fantasies that never happened until Spanish is the common language of campaigning if not governing.

You are probably correct.Thank God I am 62 years old now and I have no children. Otherwise, suicide would probably be preferable to George Soros’ America.

You are probably correct.Thank God I am 62 years old now and I have no children. Otherwise, societal suicide would probably be preferable to George Soros’ America.