“He offers Dems the very best chance in 2020, especially in key states.”

Just a few months ago, people on CNN and MSNBC were calling Michael Avenatti a contender for 2020. His legal troubles have put an end to that, but Avenatti still wants to be involved so he endorsed Joe Biden. What a great win for Joe.

Joe Biden endorsed by Michael Avenatti after launching 2020 bid: ‘He has my enthusiastic support’

Joe Biden has already picked up a big-name endorsement — but it might not be one he is happy to receive.

The former vice president, who formally announced his 2020 bid on Thursday morning, can count on the support of disgraced lawyer Michael Avenatti.

“I am extremely happy that @JoeBiden has decided to enter the race. He offers Dems the very best chance in 2020, especially in key states. He has the fight, intelligence and fortitude to beat Trump and begin to make America, America again. He has my enthusiastic support,” Avenatti tweeted.

Earlier this month, Avenatti, the former Stormy Daniels attorney and once-rumored 2020 presidential candidate, was slapped with three dozen new federal charges alleging he stole millions of dollars from his clients, failed to pay taxes and lied in bankruptcy cases, amongst other accusations. 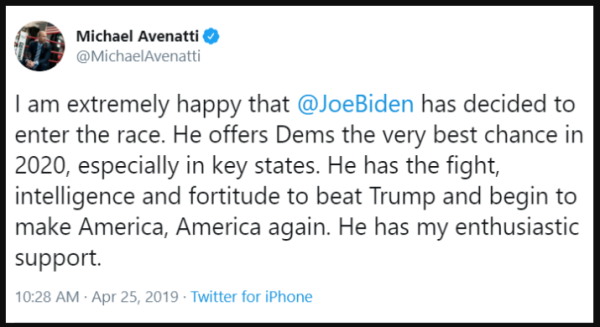 Maybe Avenatti is hoping Biden will win and pardon him. His future isn’t looking very bright.

In the continuing saga of Michael Avenatti’s fall from grace, a federal grand jury has indicted the Newport Beach attorney on 36 counts of fraud, perjury, failure to pay taxes, embezzlement, and other financial crimes.

The Santa Ana grand jury outlined serial abuses of power, alleging that Avenatti stole millions of dollars from five of his own clients. Perhaps the most striking detail of all, however, is the potential consequence for his alleged crimes: 335 years in prison, if convicted on all counts.

“For 20 years, I have represented Davids vs. Goliaths,” the self-described “Fighter for Good” tweeted in response to the new charges. “Along the way, I have made many powerful enemies. I am entitled to a FULL presumption of innocence and am confident that justice will be done once ALL of the facts are known.”

Funny, I don’t remember him talking about the presumption of innocence for Brett Kavanaugh last year.

counselor: “show me on the doll where biden touched you”

counselor: “show me on the doll where biden touched you”

Well, that seals the deal for me.

I am surprised that Avenatti didn’t approach several campaigns and offer NOT to endorse the candidate if they gave him enough money. Here I thought he was a much better grifter than that.

So glad I wasn’t drinking coffee when I read that, Anchovy! Hee!

How is this guy not in jail?

And, Avenatti is a REAL lawyer, something that has not been said of Comrade Creeper.

I suspect that rags and Aventti are cut from the same cloth, with both thinking they are great lawyers 🙂

Talk is cheap. Has he contributed any of his clients’ settlement funds?

Avenatti is likely to be a convicted felon soon. one would think he would endorse bernie “boston bomber has a eight to vote from prison” sanders.

Don’t you mean that Biden got the all-impotent Avenatti endorsement?

Read elsewhere that he has asked for a delay in proceedings because he has yet to retain counsel.

No money. No disposable assets. No credibility.

What lawyer would want to get involved with that hot mess.

Will he try to represent himself?

Maybe CNN can loan him one?

When will we hear if he gets the other highly coveted endorsements? There’s still the Antifa endorsement, the KKK endorsement, and that finest of all- the David Duke endorsement!

And it’s sad, there’s no longer a John McCain endorsement possible. Maybe Mitt Romney will step in to fill the gap, he’s equally two-faced and duplicitous!

Of course he is. He has “principles”. Heard that one before, right here at LI. Seems the neverTrumpers all fancy their selves as principled.

They have so much “principle” they will vote for a communist.