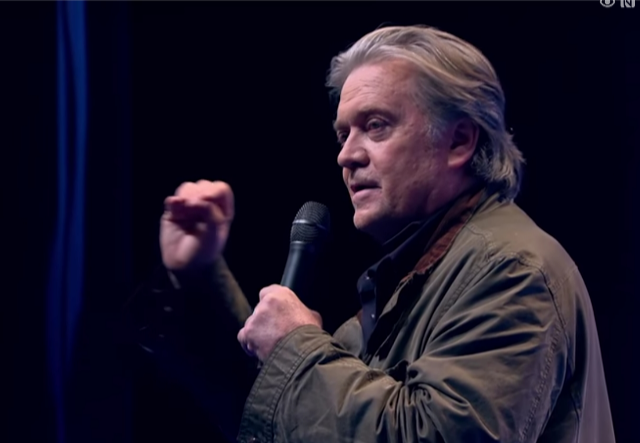 The Alternative for Germany (AfD) party has invited Steve Bannon to speak at the country’s parliament next month, the Hamburg-based news weekly Der Spiegel disclosed. “The AfD is planning a meeting for right-wing bloggers and writers at the Bundestag,” the magazine reported. “The party has invited U.S. President Donald Trump’s former chief strategist Steve Bannon.”

By hosting President Trump’s former adviser at the Bundestag just days ahead of the EU election, the AfD will be sending a strong signal to the German voters. In recent years, Bannon has been touring Europe to build an alliance of right-wing parties to challenge the pro-EU establishment parties in next month’s European election.

Bannon sees the upcoming EU parliament election as key to defeating the globalist agenda. “The beating heart of the globalist project is in Brussels,” Bannon told British newspaper The Guardian last year. “If I drive the stake through the vampire, the whole thing will start to dissipate.”

Bannon did not deny receiving the AfD’s invitation, but he did not make any further comments to reporters, Der Spiegel noted. The magazine reported the details of the Bundestag event:

The AfD members of parliament have invited right-wing journalists and bloggers on May 11. The “1st Conference of Free Media” — as the event is called — will deal with how the exchange of information “can be organized in a better and efficient way,” the invitation letter said.

Beside speeches, there will be an hour-long “practical seminar” by lawyer Ralf Höcker on “How to Articulate in a Legally Secure Way: The Risks and Side Effects.” Höcker often represents AfD officials in cases pertaining to media affairs. A “surprise guest” has been announced for the closing lecture on how to “run a successful campaign.”

According to the information [obtained] by Der Spiegel, Stephen Bannon, U.S. President Donald Trump’s former chief strategist and former publisher of the right-wing media outlet Breitbart News, has been asked. “We are now sorting out the details,” Petr Bystron, the host of the conference, confirmed.

For months, Bennon has been trying to unite the right-wing forces in Europe and said in an interview to the right-wing newspaper “Junge Freiheit” two weeks ago that the AfD does an “excellent work” and has been his point of contact in Germany.

In early 2017, Bannon launched a Brussels-based think-tank The Movement to help anti-establishment parties to improve their ground game. The organization offers polling data, analytics, and social media advice to right-wing candidates and parties ahead of the European elections to be held from May 23 to 26.

Bannon’s biggest success has been to rope Italy’s deputy prime minister and head of the League party, Matteo Salvini, into his coalition. Salvini and France’s Marine Le Pen are leading a pan-European alliance, the European Alliance of Peoples and Nations (EAPN), to challenge the hegemony of pro-EU parties in Brussels. The EAPN has received support from Germany’s AfD and Austria’s Freedom Party (FPÖ).

Salvini’s EAPN and other right-wing allies could emerge as the “biggest single group” in European parliament, the UK newspaper Independent reported this week. The anti-EU alliance is now projected to win 184 seats in a 700-seat parliament, ahead of the European People’s Party, an alliance spearheaded by German Chancellor Angela Merkel’s Christian Democratic party (CDU).

“We’re not in America,” Alexander Gauland, one of two co-leaders of the anti-immigrant party, told the Funke Mediengruppe newspaper chain in an interview published on Saturday.

…Mr Gauland said that while his co-leader Alice Weidel had met once with Mr Bannon, he saw no possibility of cooperating with him. “Mr Bannon will not succeed in forging an alliance of the like-minded for the European elections.””

That was reported by The Telegraph in August 2018.

I wonder what’s changed since then? And can Bannon truly be a force in German politics, or are the people so sick of Merkel and her backstabbing policies that the Right tide is rising anyways, and Bannon wants to ride that wave while claiming to be relevant?

Also, I wonder how Bannon, of all people, managed to avoid Mueller’s inquisition in the USA these previous 2 years?

We have a lot of issues in common with Europe, and they listen to us avidly. Also, we are the elephant in the bathtub.

Maybe they realized that Merkel is one of the tenured faculty at the Frankfurt School?

At least they didn’t call in Karl Rove. Imagine that landslide against them?