Gee, I just can’t imagine why 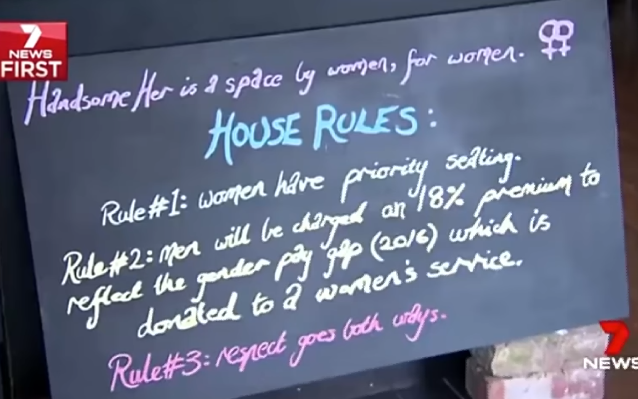 I’m shocked, SHOCKED that an eatery which discriminated against half the population couldn’t hack it.

Handsome Her, a feminist vegan restaurant in Melbourne Australia closed its doors April 14. When it opened in 2017, it made global headlines for charging an 18% ‘man tax’ to male patrons in order to highlight the non-existent gender wage gap. The tax was charged for one week each month.

In parting, Handsome Her lamented the discrimination of lesbians among the LGBTQ community wrote thusly:

It’s been a wild journey to say the least. When we opened Handsome Her in 2017, we expected that perhaps we might make a stir through our brazen public discussions of structural inequality and oppression. The man tax blew up the internet, an idea that we didn’t think was all too radical, yet the way the world responded showed us how fragile masculinity is and solidified the necessity for us to confront and dismantle patriarchy. We were just one little tiny shop on Sydney Rd that was trying to carve out a swathe of space to prioritise women and women’s issues, and suddenly we became the punching bag of Melbourne and the internet. Yes, we are the evil, discriminatory, man-hating dykes who charge men more when didn’t you know the wage gap doesn’t even exist!? Meanwhile gentlemen’s social clubs live on and strong around Melbourne and the world over…

…While it is a shame to lose the physical space (and we understand how essential it is for women and lesbians to hold space), we leave knowing that the communities we have made transcend the trendy vegan café on Sydney Rd, Brunswick. We look forward to continuing Handsome Her in a variety of other, more creative ways and expanding our efforts to drive change with flexibility and mobility throughout Australia.

I’m so, so over the juvenile and petulant man-shaming. Seriously ladies, get yourself into therapy, deal with your Daddy issues, and stop vomiting your insecurities and childhood trauma all over every man in existence. That way lies peace, happiness, and the ability to enjoy people irrespective of gender.

I thought gender was an oppressive transphobic social construction. Or so said the Diversity and Tolerance Nazis.

Think about it. That is what should happen when hypocritical vegans abuse the male animal and have their buy products for lunch (or dinner).

There is really only one true punishment for anyone having such absurd demands from society…
1] They should live a long useless life, vacant of all meaning or usefulness.
2] Without friends, associates, family, children or mates – alone in their little house, being maintained with their little stipend.
3] Have constant problems with their ‘plumbing’, but only a disinterested doctor to complain to.
4] Constantly thinking of what “might have been” before putting their teeth in and slurping their daily soup.

I was wrong.
I always say we should reopen the insane asylums.
I’m now convinced there isn’t enough housing for them all let alone enough drugs to help them find reality.

Social rejection leads to doubling down on the outrage and victimhood…that’s what I clearly see in their little farewell speech.

So she thinks the patriarchy is fragile because they don’t want to pay an 18% surcharge on a probably over charged vegan meal… Many will call that smart. Or at least financially responsible.

Never heard of them.

Insane, all of them. Just fffing insane. I can only hope they do not reproduce.

You can’t run a successful business if in the first place you don’t know what the actual purpose of a business is.

A business is all about making a profit, and it will be hard to make a profit by pissing off half of your potential customers. For the most part, customers do not want to hear about your politics.

Sounds like it was a fun place. And we were recently in Australia. Unfortunately we opted for the seafood most of the time. Oysters, fish and such stuff. Bit of lamb. Missed this extravaganza.

Probably got the idea from a Portlandia sketch.

Kimberly, you suggest these gals get into therapy. Don’t even think that’s going to do the trick.

Lobotomy might work. Short of that, I think far too many who have psychological therapy end up being more screwed up than before.

My sister regularly visits, and when I speak to her after one of them she is raving at the unjust world, hatred for our parents who somehow abused us as children without abusing us as children because of her memories being twisted by her therapist. Of course she is a liberal, which I am convinced is a form of mental disorder, thinking that gets so convoluted with opposing stances and twisted morality that it is no wonder they are such confused and conflicted people.

Except for nasty, shrill, lesbian feminists?

I was going to point out how brazenly hypocritical that remark was, but you beat me to it.

Instead I’ll go with “Respect is earned” and the people who used to run this place showed they were not worthy of it.

Couldn’t have happened to a more deserving business model.

Wait–how did they identify who was male and who was female? Profiling?

” The man tax blew up the internet, an idea that we didn’t think was all too radical”

Because nothing quite facilitates discussion and negotiation as well as opening with, “You owe me plenty, I owe you nothing”? Although you’d think feminists would be angry that these fools are blowing their “feminism just means equality” cover.

It is a shame that they are no longer making episodes of “Upper Middle Bogan.” This is exactly the type of PC BS that they excelled in mocking. I would have died to see Danny Bright take Wayne Wheeler for lunch in this place. The scenes would write themselves.

If only someone would open a “White guilt” café with an 18% surcharge going toward slavery reparations. I would totes imbibe daily on my gruel whilst wearing my sack cloth of penitence.

Of course, I didn’t exactly descend from the Mayflower. None of my ancestors were even in this country until well after slavery was abolished.

But, as Zen Mistress Ilhan Omar, America’s Somali Sweetheart Miss Mogadishu Car Bomb 2019, puts it, somebody did something.

An all purpose phrase that means somebody who didn’t so something now has to pay. “Get your morality out of my feminist bedroom, lackey running dog for the Xtofascist patriarchy. But leave your wallet on the dresser because you have some awfully good credit cards.”

I figure since it’s the men that defend and die in wars … with hardly no thanks … that 18% is a mere token of what men are owed by women.