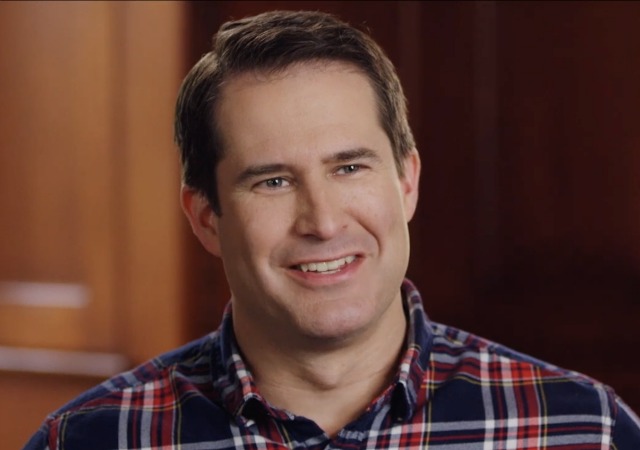 Rep. Seth Moulton (D-MA), who is known for criticizing his own party, became the 20th Democrat presidential candidate after he announced his decision on Good Morning America:

“I’m here to tell you, and to tell America, that I’m running for president of the United States,” Moulton told ABC News Chief Anchor George Stephanopoulos on “Good Morning America” Monday. During his campaign, Moulton said he plans to “talk about patriotism, about security, about service. These are issues Democrats for too long have ceded to Republicans.”

Moulton, a former Marine who served in Iraq and an outspoken critic of his own party, was elected to the House in 2013 and has served three terms.

“I returned home and decided to run for Congress because I realized that a lot of Americans are feeling betrayed by Washington the same way that we did in Iraq. Ask anyone who’s lost their job to a changing economy, or a child to opioids, or has to choose between heat and food in the winter, they’re feeling forgotten,” Moulton said in his announcement video posted on Twitter Monday morning.

I’m running for President to build a strong and safe country, create the jobs of the future, and elect leaders we can be proud of. Join our mission: https://t.co/9caxN9579q. https://t.co/Pyr6IRNq5e

Of course the Iraq veteran mentioned President Donald Trump as he insisted “we have to beat him” and that he wants the Democrats “to beat Donald Trump because I love this country.”

I have to say his main points for his campaign sets him apart from the others because it’s not all about social justice. He wants to concentrate “on service, security and patriotism” which is where he believes “Trump is weakest.” He said:

“Well, first of all I’m going to talk about patriotism, about security, about service, these are issues that for too long Democrats have ceded to Republicans and we’ve got to stop that, because this is actually where Donald Trump is weakest, we’ve got to take them on on these issues, on these core values that make us strong, and that’s what I’m going to do in this campaign. This is going to be a campaign anchored in service, in security and in patriotism.”

ABC News noted he has a “moderate voting record,” but like other Democrats, he wants to ban “semi-automatic assault weapons” and supports abortion.

However, Moulton did, at first, voted against Nancy Pelosi for Speaker of the House. That changed when she promised to only serve two terms as speaker.

Moulton also crossed Democrats when he ran against incumbent Rep. John Tierney, an 18-year representative, in Massachusett’s 6th District. He won in 2014 and took the seat over in January 2015:

He continued to run, a bold move he said he owes to the training he received as a Marine.

“They said you’re going to lose, and by the way, you’ll never run for anything again because you don’t challenge the establishment,” Moulton said in an appearance on “Late Night with Seth Meyers” in 2018.

“Fundamentally, what they were saying to me as a veteran is, ‘Do not participate in the democracy you risked your life to defend.’ And that’s wrong,” Moulton said.

That Dictatorship Party (HEE HAW)
sure is desperate to spy on and gather all the data on folks – even though most of them who will be netted don’t intend for that corruption to have all their data…….

JusticeDelivered in reply to notamemberofanyorganizedpolicital. | April 22, 2019 at 11:01 am

“he wants the Democrats “to beat Donald Trump because I love this country.”

I love most of what Trump is doing to save America from being overrun by dumb people.

Speaking of spying on citizens….

Just say no to another Bay State liberal.

It wouldn’t surprise me if this was all a plan to pave the way for drafting Mitt Romney as Dem nominee. Yep, that’s crazy talk but you have to think crazy to make any sense of what is going on in that party. Does anyone over there do any polling? Are they just making fun of us?

Moulton is my Congressman. Although I admire his military service, he is a typical left wing Harvard moonbat. Just say no.

I agree. I disagree with 98% of what this guy supports. He is very anti-second amendment for example.

My first encounter with Seth Moulton was when he was the main speaker at a hometown Memorial Day ceremony. The speaker is nearly always a former military person, so he was technically well-qualified. The speech is usually something patriotic and uplifting. He ruined it by turning it into a gun-grabbing, GOP-bashing campaign speech. Meanwhile his family members and friends invaded the crowds, trying to hand out “Seth Moulton” bumper stickers and banners. One particularly pushy batch of them wormed their way to the front and blocked the view of several old-time veterans who were confined to wheelchairs. I asked them to step aside, and they ignored me. So I asked again, loud enough for about 100 people to hear the exchange. That was enough to get them to move away, but they had already wrecked the day.

He’s a jerk and an idiot. To paraphrase Gilbert and Sullivan, he’s “never thought of thinking for himself at all.” Just a rubber-stamp leftist.

He wants to concentrate “on service, security and patriotism” which is where he believes “Trump is weakest.”

Must have suffered a head injury.

Never heard of the guy.

The Democrat Party has been recruiting veterans like they recruited Blue Dogs to get the speakership for Nancy Pelosi. We all got to watch as Nancy subsequently told them to sit down and shut up. There was huge turnover in that class, but Nancy is still with us.

His words sound great, and would be a fine new direction for the Democrat Party, except that, if he wins, the Democrats won’t follow him. I remember watching Jimmy Carter win the Presidency, only to have a resentful Ted Kennedy oppose him every step of the way. Jimmy was by no means ready for the job, but he might have had a successful presidency, had he been given the support of his Party.

Are we to believe that, given a person with DJT’s policies plus a D after his name, the Democrats will suddenly reverse their opposition to lower taxes, better economic policies, the use of accountants to control our spending, and immigration reform?

I remember Barack Obama promising to have time for public review of all legislation. I remember what Nancy Pelosi did with that promise, and the Obamacare legislation.

I am not going down that road.

I think you missed the part where he is not offering anything new. Just a military veteran spouting the same old nonsense. He sounds like Romney, he hits some of the right notes but clearly can’t sing the song.

If Trump had a (D) after his name Meliania instead of Michelle would be on the cover of issue Vogue. Only one of the two actually belongs on the cover based on her own merit.

Don’t be fooled by the military experience. Moulton is as liberal as Warren. I’m not sure he did this, but the whole point of his military experience may well have been to do a John Kerry and leap into politics. At any rate, he wasted no time. And he is a down the line left winger. I mean, “forced to choose between heat and food in the winter.” That’s a Joe Kennedy line. Hope Moulton paid for the rights.

Democrats often say these things to get to DC, but once in DC they all all follow the party line, however sick that is.

And, even though he is a veteran, he supports gun confiscation.

How long before Jimmy Carter and Walter Mondale throw their canes in the ring?

How is he supposed to stand up to the Russians if he cannot even stand up to Nancy Pelosi?

Straight, white, male and a veteran… he has no chance in this primary though it will be interesting to see if he jumps ahead of “my candidacy is dead but I just can’t accept it” Elizabeth Warren among MA voters.

In separate new, Warren is out with another “policy” idea today. Student debt forgiveness for (almost) all and free tuition at all state schools and community colleges.

Better watch it , Democrats named Seth who go against the party tend to end up faced down with two in the back

Ok, so we need this guy like we need a democrat and his baggage in high office, appointing Supreme Court justices.

If this guy had any intergity, he’d NEVER align himself with the modern Jew-hating democrat party.

Besides, what qualifies this guy as leader of the free world? Is he gay? Is he black? Is he both? (Well, we had both with obama, and we see how that worked out.)

I’ll bet he raises at least $25.00 his first week of campaigning.

Wonder if his Mom wanted a boy instead?