Catholic Churches being vandalized across the USA

Catholic Churches being vandalized across the USA

From Massachusetts to California, Catholic Churches are reporting wrecked statues, graffiti, and defilement of sacred objects. 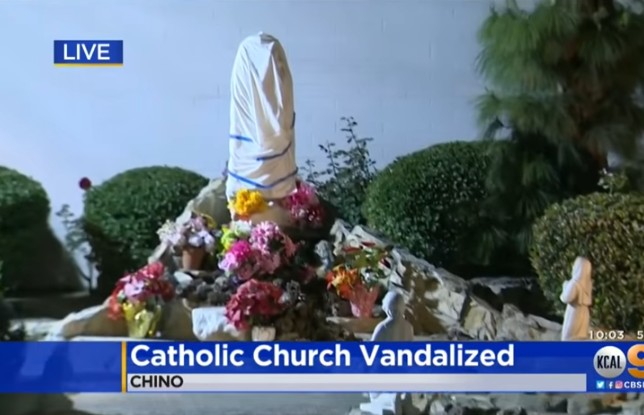 As Mary Chastain noted in her report covering the fire at Notre Dame Cathedral, Catholic Churches across France have been attacked over the past few months.

And while the cause of the fire at the famous cathedral appears to be related to an elevator’s faulty electrical system, other churches have been attacked and sacred sites desecrated. In February, 10 churches were hit< in one week alone/a>.

In early February, in the Church of Notre-Dame-des-Enfants in Nimes, near the Spanish border, intruders drew a cross on a wall with excrement then stuck consecrated hosts to it.

The tabernacle was broken and other consecrated hosts were destroyed, prompting Bishop Robert Wattebled of Nimes to issue a statement Feb. 8 to say that the desecration was so severe that the church building could not be used until penitential rites of purification had been carried out.

In the U.S., several Catholic churches across the nation have also reported acts of vandalism. Many of these incidents have occurred in late March of this year.

Boston-area police are investigating a series of attacks on church statues.

Police are investigating a string of vandalism attacks targeting Catholic churches following the latest incident Wednesday night at St. Gregory’s in Dorchester, where a Virgin Mary statue was reportedly tagged by a red substance.

The statue has reportedly been vandalized four times in the past month. Police say they’re “actively reviewing the facts and circumstances surrounding these incidents.”

The incident follows two similar incidents of vandalism March 11 and 13, when officers responded to calls at two churches in Hyde Park. On March 11, a statue at the Most Precious Blood Church at 25 Maple St. was also vandalized by a red substance, and two days later another red substance was observed on a statue at St. Anne’s Church on 90 West Milton St.

The string of church vandalisms also follows two other separate incidents in March, where law enforcement statues appeared to be targeted.

In early April a Connecticut church was hit.

A vandal broke a statue at Basilica of Saint John the Evangelist in Stamford late Saturday night.

. . . . The congregation was left outraged and in disbelief.

“I really am disheartened about the lack of respect for the church that some people show without expressing any kind of conscience. It’s just unconscionable,” says worshiper Bill Lasko.

In late March, police released surveillance camera images of a vandal who used a baseball bat and rocks to damage windows at Holy Family Catholic Church in Ohio.

#HELPID – Suspect in photos damaged windows & flower pot at Holy Family Church on S. Findlay St. on 3/16 & 3/17. Male used a baseball bat in one incident & rock(s) in the other.
If you have any information on this crime, please call 937-333-COPS or Crime Stoppers at 222-STOP pic.twitter.com/NqpFgQRwDy

On the West Coast, there appears to be a vandal targeting Catholic churches in Pomona Valley. The latest hit was reported in late March at Saint Margaret Mary’s Church in Chino.

[O]n March 30, a vandal trespassed onto the property and delivered a blow that severed the statue in two.

The damage made the church recall a strikingly similar crime at another local Catholic church.

“That’s why I’m thinking it was a sledgehammer like they used at Our Lady Lourdes,” Hacker said.

Just a month ago and three miles away in Montclair, a person was caught on camera hopping onto a planter at Our Lady Lourdes Catholic Church and using what appeared to be a sledgehammer to hack the heads off two of their statues.

Saint Margaret Mary’s Church thinks the same person is responsible for both crimes, and now they wonder if the same person destroyed their double pane stained glass window last month.

“It’s a picture also of Mary that was just shattered by a huge, huge stone,” Hacker said.

The Vienna-based Observatory of Intolerance and Discrimination Against Christians in Europe indicates that much of the French vandalism is believed to have been the work of secularists, feminists and other anti-religion groups. Perhaps that is the case in the U.S. as well?

This Easter, I will pray for all the damaged churches and for the comfort of their parishioners.

A thousand Christian/Catholic churches could be vandalized across the US and the world with hundreds killed and not a word will be uttered about it by the MSM….but one mosque…and THAT’S ALL they will talk about for weeks…

I’ve heard plenty about black churches being hit. I think both stories are important.

Then in 1995 when I saw a small news item in the NYT saying that over the past year 37 black churches had been burned in the past year, along with “more than a score” of white churches. That phrasing struck me as very peculiar. The contrast between the precise number in the first instance and the very vague number in the second seemed designed to obscure something. “How many more than a score?”, I asked myself; “could it possibly be 17 more? Or even more than that?” And that’s when I realized that the whole thing was a hoax.

Over the course of time some of the arsonists were caught, and if I recall correctly none of those cases turned out to have been done for racist motives. It’s possible that many of the unsolved cases were indeed racist, but I have never seen any evidence to support that supposition, so I’m going with the working hypothesis that none were.

Hatred of Christians has stopped CFA from being fast food at San Antonio airport, has today cost hundreds of lives to be lost in Sri Lanka, has witnessed persecution of Christians around the world.

So, what does the MSM talk about? Impeaching Trump because he got frustrated.

Well, as a Christian, I am frustrated with the MSM ignoring anti-Christian true stories. Guess that makes me guilty too.

Welcome to Revelation. Part of the hatred is fear as pointed out by C.S. Lewis. They fear that however they try to avoid it, ignore it or suppress it…they will have there defenses broken and have to face facts that there is a God.

Alaska Airlines used to have a small Psalm on the dinner tray. The guy next to me was aghast and angry with that . Why? If religious belief is worthless than why so upset..ignore the worthless thing. But it convicted his conscious and that troubled him.

That said, all beliefs are NOT equal and that which demands death of nonbelievers is an abomination. That shows the same fear that they are wrong and must force their will on others.

But, of course, the terrible accident at Notre Dame had NOTHING to do with any of this, and you should be ashamed or worse for suggesting or even thinking the thought that it did.

We will never know the truth about Notre Dame

I wonder if there were security cameras at the construction site.

Will the Prime Minister of New Zealand don her hijab in solidarity with Islam today?

The PM of NZ, Leftist minority leader and virtue-signaller-in-chief, Comrade Ardern, former president of the International Union of Socialist Youth misplaced her hijab after the Sri Lankan
church carnage. Instead, she delivered a stern warning that all religions are free to practice in NZ, although quite oddly the Leftist government moved to expunge any reference to Jesus Christ from the Parliamentary vernacular and, as has been noted elsewhere, prefer Muslim migrants over Christian migrants, even though 10% of the Syrian population is Christian and in fear of their lives.

Yeah, the elevator. Don’t worry it will be a mosque in a few years and no one will dare touch it.

Of course, they may stable horses in it for a while first.

How do you like the Hope and Change, now, Obama voters?

Who believes the elevator story?

I saw a European news show that was broadcast in English. The former Notre Dame Architect assured everyone that an electrical problem did not start the fire. So apparently he doesn’t believe in the elevator story.

You mean other than Leslie Eastman ? I am appalled that she believes that claim, given that it was made before any fire inspectors were allowed to enter the building as it was not deemed safe.

I inadvertently down voted you with my stubby fingers. Sorry.

On a positive note, Happy Easter everyone.

And a reminder that with Passover, that the greatest human forces on earth have no sway.

Catholic charities made fantastic amounts of money bringing Islamists into Western countries to destroy Western Civilization. They should have known better. They are complicit in their own destruction.

Kindly furnish us with a clutch of valid links to support your statement.

Violence committed against the statue of Virgin Mary may be evidence of a toxic anti-religious (i.e. immoral or amoral) bent, feminist proclivities, or a misogynistic social orientation.

Those people have always been present in America. This phenomena is new and coincides with increased Muslim immigration and increased attacks on Catholic Churches in Europe.

Muslims have a 1400 year history of destroying the artifacts of other religions.

Ladies and gentlemen: this is what bullets are for.